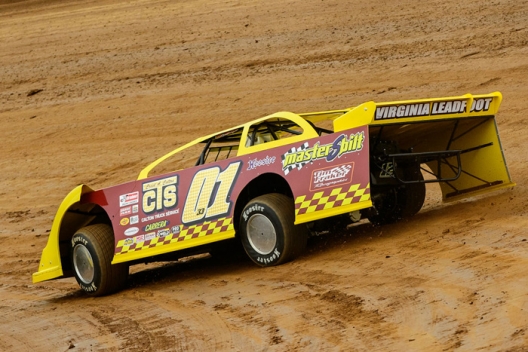 Eschewing his original plan to compete in the World of Outlaws Late Model Series Illini 100 at Farmer City (Ill.) Raceway, Satterlee stayed much closer to home for the race honoring ailing former Hagerstown champion Rodney Franklin and ended up capturing the richest victory of his ever-rising Dirt Late Model career.

Satterlee, 30, was in a league of his own at the half-mile oval, roaring off the outside pole to dominate the entire 33-lap distance without facing a single serious challenge. His whitewash of the field was worth a mammoth $12,422, including the $4,301 base winner’s purse plus all of the $8,024 in lap money collected for the event, $33 for winning a heat and his $66 share of the $3,000-plus bonus pool of sponsorship money that was divided among all 33 feature starters.

“It’s pretty awesome to come here and win this much money,” said Satterlee, whose previous highwater earnings mark was the $10,550 he picked up for his first-ever WoO triumph on July 31, 2013, at Shawano (Wis.) Speedway. “I guess I won’t say we were a longshot to go to Farmer City and win (during the Illini 100 doubleheader), but I’d say the chance of us going there and picking up 12-grand was slim.

“We were gonna go out there, but when they put this show on and the money just kept getting bigger and bigger for it, there was just no choice but to come here. I guess it did keep us from going and getting some practice in on UMP tires in the Midwest, but when one of your favorite tracks has a race this big, you gotta go.”

Satterlee does indeed have an affinity for Hagerstown, which sits just 10 minutes away from his crew chief Robby Allen’s Maryland shop — where Satterlee’s Rocket Chassis machines are housed and prepared — and a modest 2-and-a-half-hour drive from Satterlee’s western Pennsylvania home. He now has six career wins at the Ernie Davis-promoted facility — at least one in each of the last four years.

One of Hagerstown’s all-time greats, Gary Stuhler of Greencastle, Pa., proved to be no match for Satterlee. After the race’s polesitter was outgunned for the lead at the initial start and couldn’t stick with the fleet young star, he settled for a runner-up finish, nearly a straightaway behind Satterlee even with a caution flag having tightened the field just five laps from the checkered flag.

Kyle Hardy of Stephens City, Va., passed Kenny Pettyjohn of Millsboro, Del., for third place on lap 28 and finished in the position, just a car length behind Stuhler. Pettyjohn hung on to place fourth and Allen Brannon of Winchester, Va., completed the top five after grabbing fifth place from Austin Hubbard of Seaford, Del., on the final restart.

For Satterlee, the key to the race was beating Stuhler to the punch on the opening lap.

“He got off good and got me by a whole car length at the flagstand,” Satterlee said of Stuhler. “But I knew I wanted to lead that first lap — I wanted to lead them all, is what I really wanted to do — and he just left me enough room (on the outside) off (turn) two to make a move.

“He hung wide, wide, wide, and I was kind of like, ‘I gotta turn in … nah, I just gotta wait.’ Then he kind of turned in … I think he waited so long that when he tried to go under the bottom, he almost messed himself up a little bit and that left me just enough room to get a full head of steam out around him (down the backstretch). We got to that opening in the backstraightaway and I was clear ahead of him.”

With Satterlee able to almost effortlessly glide away from Stuhler to build a commanding lead, his only obstacle to his first victory of 2015 was restarts. But Satterlee had no trouble leaving Stuhler behind after caution flags on laps three (multi-car tangle in turn two that briefly forced red-flag conditions), 13 (Justin Kann of Huntingdon, Pa., stopped in turn four) and 28 (seventh-place Jamie Lathroum of Mechanicsville, Md., slowed with a flat left-front tire).

“I hate how they do the restarts here — you get to choose (a lane as the leader), but you have to wait until you’re in that (turn four) box to go so (the second-place driver) knows when you’re gonna go,” Satterlee said. “It’s not like I’m gonna trick him. It just makes it really, really difficult to restart two-wide in a designated starting area … I’m always afraid of going too early because if you restart early here they usually put you to dead-last.”

Satterlee’s Andy Durham-powered car was ultimately too stout for any dire consequences to result from restarts.

“We’ve just worked on our car enough here that man, you can just coast almost the whole way around the corners,” Satterlee said. “It just handles so well here. I just really feel comfortable here.

“Starting on the front row was humongous, there’s no doubt about that. If we hadn’t done that, I don’t know … our car was really good, but it would’ve been tough.”

Stuhler, who celebrated his 60th birthday on April 13, conceded that he was no match for Satterlee.

“He put a spanking on us, didn’t he?” said Stuhler, who was victorious on April 4 at Hagerstown with his Club 29 Race Car. “I couldn’t get off the corner. I just didn’t have the traction he had getting off the corner.

“I just got worse as the race went on. I was loose there at the end and I was struggling just to hold on to second. That’s the first time we’ve run this car with a hard left-rear tire on it and it just needs a little adjustment. It’s a good car, but we were just a little off.

Satterlee knows he made the right call to hit Hagerstown. After a frustrating, struggle-filled Georgia-Florida Speedweeks trip in February, he needed the pick-me-up that Saturday’s conquest provided.

“It’ll help us pay off some parts bills from Florida,” said Satterlee, who began to turn around his program with a fourth-place finish in the April 11 Aaron’s King of the Commonwealth at Virginia Motor Speedway in Jamaica, Va. “Anytime you can win a big amount of money in one night, it makes up for a lot of bad nights. This will help get us caught back up.”

Notes: The Salute to a Champion event, which was added to Hagerstown’s schedule less than one month ago, paid tribute to 1997-98 track champion Rodney Franklin of White Post, Va., who was unable to attend due to his worsening health problems. Two of Franklin’s three daughters were among the family members and friends who represented the 61-year-old driver known as the Virginia Leadfoot … The '01’ in the purse signified Franklin’s car number when driving for Creed and Linda Calton, while the 33-lap race's distance mirrored the car number of Franklin’s family-owned machine during much of his career. ... Devin Friese of Chambersburg, Pa., who has a close relationship with Franklin, unloaded a car carrying a graphics scheme and the No. 01 that made it look like a twin of the Calton No. 01 that Franklin drove for a decade before his run as a regular racer ended in 2002. … All 33 cars on hand started the feature — fitting, because it matches one of Rodney Franklin's trademark numbers. ... Satterlee never raced with or met Franklin, but he said he’s well aware of the standout driver. “I used to watch my Uncle Dave (Satterlee) when he’d come and race here and I always remember that name and that 01 car,” Satterlee commented. “He was one of the dominant guys. That Rodney Franklin and that 01 car sticks out in my head.” … Earl Pearson Jr. of Jacksonville, Fla., was on hand tuning up for the April 25 Lucas Oil Series event at Hagerstown. He dropped out of the first heat due to a busted brake line and finished 26th in the feature.