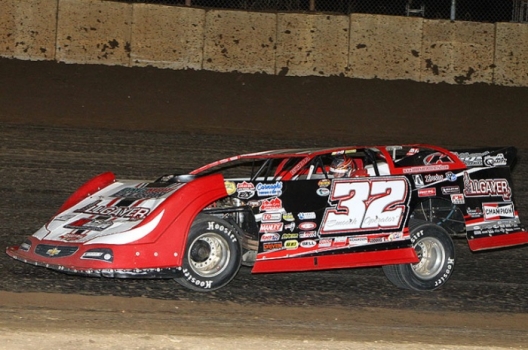 For the sensational teenager, the long-distance feature seemed like it would never end.

“I’m still shaking after that race,” said Pierce, who completed a $20,000 sweep of the Thaw Brawl weekend that he kicked off with a 50-lap triumph on Friday night. “It’s one of the longest races ever. There’s just a million things going on through your mind (while running in the lead). Even the slightest of noises you hear that the car’s making going down the straightaway or something, you’re like, ‘Oh, man, what was that?’ It’s really nerve-wracking when you’re out there leading the race — especially this one.”

Pierce, 18, of Oakwood, Ill., kept his composure to stay in front, holding his rivals at arm’s length for the richest victory of his young career. He crossed the finish line several car lengths in front of Oxford, Iowa’s Chris Simpson, who muscled past Jared Landers of Batesville, Ark., rounding turns three and four on lap 63 to grab second place.

Ricky Weiss of Headingly, Manitoba, slipped by Landers as well on lap 63 and finished third racing as a teammate to Adam Hensel of Baldwin, Wis., in a J.R. Haley-owned car. Making his first-ever visit to the quarter-mile La Salle oval for the Thaw Brawl weekend, Weiss raced off the outside pole to lead laps 1-21 but fell to the back of the top five before rallying to grab the final podium berth.

Brian Shirley of Chatham, Ill., finished fourth — the same position he started the race — after climbing as high as second and challenging Weiss for the lead during the race’s early laps and Landers settled for fifth, also ending the event in the same spot he started it.

Pierce, who started sixth, quickly moved up to second in his Pierce Race Car, but overtaking the fleet Weiss proved to be a difficult chore. On several occasions Pierce faltered while racing close to Weiss and lost ground.

“A couple times there I thought I made a fool out of myself when I smacked the wall,” said Pierce, who lost second to Landers at one point. “I just got in there and pushed a little bit.”

Finally, on a lap-21 restart following a caution flag that flew when Tim McCreadie of Watertown, N.Y., slowed between turns three and four, Pierce made his move. He surged to the outside of the track racing through turns one and two and vaulted past both Landers and Weiss to grab the lead for good.

“It’s just fun, bullring racing like that,” Pierce said of his winning move. “I knew the top was fast … (La Salle promoter) Tony (Izzo Jr.) did a great job working the track today — made a lot of changes to it from yesterday, put some more water on the racetrack (and) built up a cushion and stuff — and we just got good two-lane racing like this track usually does.

“I was just really glad that we had a car this weekend. We’ve been making improvements to the car, finding stuff. We just spent a long week in the shop finding things. That’s what drivers always say — ‘little things’ — and it really is.”

After entering the weekend winless in eight 2015 starts spread across February’s East Bay Winternationals and March Lucas Oil Late Model Dirt Series events in Ohio and Indiana, Pierce was thrilled to break back into the spotlight he occupied so often during his 16-win UMP DIRTcar national weekly championship season in 2014. Winning at La Salle was especially satisfying.

“This is one of my biggest wins money-wise,” Pierce said, “and there’s just really tough competition here like (Scott) Bloomquist, (Billy) Moyer. I always wanted to race against those guys when I was a little kid, so it’s kind of cool to be out here beating ‘em.”

Simpson, 31, raced within sight of Pierce after grabbing second from Landers on lap 63, but the Iowan never drew his Club 29 machine close enough to offer a serious threat. He was just glad to see the checkered flag fall because his car was failing in the closing circuits.

“The car was good (but) we just got really tight at the end there,” said Simpson, who started eighth. “I don’t know what happened, if something’s wrong with the transmission or something. It just started shaking really bad. I thought I got a flat tire, but it’s not a flat tire. We’re gonna have to look a little closer at it.”

Just three caution flags were needed in the event, including two for Friday night’s runner-up McCreadie, who started from the pole position but saw his hopes to improve one spot from the previous evening quickly disintegrate. While racing side-by-side with Pierce on lap three McCreadie clipped the backstretch wall and spun into turn three, bringing out the race’s first caution flag. McCreadie continued but went down a lap before the event’s one-third mark and then slowed on lap 21 to pull off the track, bringing out a caution in the process.

The race’s third and final caution flag flew on lap 61 for Mike Spatola of Manhattan, Ill.

Notes: Pierce’s weekend sweep left him with 11 career ALMS victories and put him on top of the tour’s points standings. He won the ALMS West title in 2014; the circuit will crown a single champion this year, however, after abandoning the regional format. … Ninth-starter Frank Heckenast Jr. of Frankfurt, Ill., made a stirring high-side charge just before the race’s halfway mark, briefly poking his car’s nose past Landers for second place before fading out of the top five as the inside groove became dominant. He finished seventh. … Jason Feger of Bloomington, Ill., ran as high as fourth but ended up 12th in the final rundown. … Scott Bloomquist of Mooresburg, Tenn., started 18th after qualifying through a B-Main but battled forward to finish sixth.