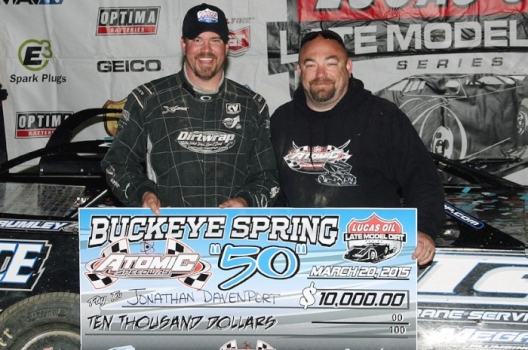 ALMA, Ohio (March 20) — The Lucas Oil Late Model Dirt Series has a new points leader.  Leading every lap of Friday’s Buckeye Spring 50 at Atomic Speedway near Chillicothe, Ohio, Jonathan Davenport of Blairsville, Ga., took control of the leader board, earning a $10,000 payday in his second series victory of 2015.

Picking up a win a in the first heat race, Davenport started on the pole of Friday’s main event, charging to a commanding lead at the drop of the green flag. Setting a blistering pace over the rest of the field, Davenport turned back an early challenge from Josh Richards of Shinnston, W.Va., to notch a convincing victory in the series first Atomic stop since 2011.

“The racetrack was fast and aggressive, pretty rough there,” Davenport said. “We felt like that was the best line to run, right around the top through the holes. It was definitely easy to make a mistake, but we pulled through. I have to thank Kevin (Rumley) and the crew and everybody. Just had a real good night.”

“We got a good run on that restart,” Richards said of his early challenge for the lead. “I knew if we could get in front of him it would be harder for him to hold that line and harder for him to pass me. Once you hold that line, it’s hard to pass people when everyone’s going so fast. He just got me back there and got momentum back.

“It was a handful there at the end. We knocked our nose … I didn’t realize how bad it was until after we pulled in with like 15 laps to go. I just had to race defense after that. We were still OK … Davenport just had the car to beat. Those guys did a really great job. I think we might have had something for them if we kept the nose up. On top of that, the throttle was sticking too. We salvaged a good finish out of it. We came here to test some things and I think everything’s going in the right direction.”

Transferring to the 50-lap A-main through a consolation race, Zeigler hopes to build on his third-place run.

“We’re excited,” Zeigler said. “Hopefully we can qualify a little bit better and be sitting a lot better feature time. Any time we run good, it seems like we come from the back. Hopefully we can turn that around and start up front so we can run up front.”

“That’s cool, definitely, to be able to take it north of the Mason-Dixon line,” Davenport said. “That’s where I’m from, the South, that’s where I’ve always raced. It’s cool to take over the points lead and to do it, well, not in the South.”

The race was slowed by six cautions. The first yellow flew on lap 12 when fifth-running Jared Landers slid over the turn-two berm. Scott Blomquist drew a lap-14 caution when he nearly slid off the backstretch berm. Landers and Chamberlain were also involved in the yellow. Another yellow flew on lap 18 when 12th-running Tim McCreadie slowed on the backstretch. The race was halted by a red flag on lap 24 when Greggie Oliver rolled his No. 47 machine in turn three; he was uninjured. Billy Moyer Jr. drew a caution on lap 31 when he slowed in turn one. The final yellow flew on lap 39 from debris on the racing surface.