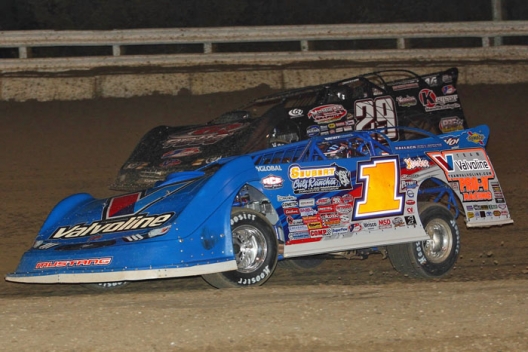 In his first one-on-one showdown of 2015 with Josh Richards, Lanigan rallied to regain command from his young rival with a powerful outside sweep through turns one and two on the 26th circuit and captured Friday night’s caution-free 30-lap UMP DIRTcar-sanctioned feature that kicked off the fourth annual Bubba Army Winternationals at Bubba Raceway Park.

Lanigan, 44, of Union, Ky., hustled forward from the fifth starting spot to pass race-long pacesetter Morgan Bagley of Tyler, Texas, for the lead on lap 18, but two circuits later Shinnston, W.Va.’s Richards — charging back into contention after tumbling from the second starting spot to fifth place in the early laps of the A-Main — surged past Lanigan on the backstretch to grab the spot.

The 26-year-old Richards appeared headed to his third triumph of Georgia-Florida Speedweeks 2015 until coming upon the slower car driven by Jordan Yaggy of Rochester, Minn., with five laps remaining. Richards had his momentum dulled when he couldn’t duck underneath Yaggy entering turn one, allowing Lanigan to sail around Richards off turn two and stay comfortably ahead the rest of the way to beat his fellow three-time World of Outlaws Late Model Series champion by 1.170 seconds.

“I seen that lapped car coming up there and (Richards) tried to go inside him,” Lanigan said. “I just went to the top — and that was the move of the race.”

Chub Frank of Bear Lake, Pa., finished third, advancing forward from the eighth starting spot. He snared third place with a lap-19 pass of Bagley and momentarily drew close to both Lanigan and Richards before crossing the finish line just over 1 second behind Richards.

Bagley settled for a fourth-place finish after surging into the lead from the third starting spot on the opening lap and Brandon Overton of Evans, Ga., moved into fifth place late in the distance and finished there to register his fourth top-five finish in as many Speedweeks starts.

Lanigan’s $5,000 win was the seventh of his career at the 3/8-mile oval. He won the finale of last year’s Winternationals.

The success turned around an uncharacteristically sluggish start to the season for Lanigan, who began his quest for a record fourth WoO title with subpar finishes of eighth and 11th during the national tour’s season-opening doubleheader Feb. 6-7 at Screven Motor Speedway in Sylvania, Ga. He'll look to keep his Cornett-powered Club 29 Race Car up front on Saturday and Sunday as the Bubba Army Winter Nationals continue with a pair of $10,000-to-win WoO programs.

“We went to Screven and struggled hard and went home and regrouped,” Lanigan said of his disappointing performances at Screven's Winter Freeze V. “Instead of sitting down here in a parking lot for three days, we went home and got our notes together and did our homework. We went through everything and just made sure it was all 100 percent before we came back.”

Lanigan showed he was on game when he used a high-side charge through turns one and two to take the lead for the first time on lap 18 from Bagley, who drove his Lanigan-designed Club 29 machine to nearly a straightaway advantage before traffic slowed his pace.

Lanigan had his own struggles with traffic a few laps later, allowing the high-running Richards to sweep by him on lap 20 with another top-side run through turns one and two. But then Richards couldn’t clear Yaggy, giving Lanigan the break he needed.

“He got by me when I got in a bad position, but then he got himself in a bad position with a lapped car,” Lanigan said of his battle with Richards. “I think we both had pretty good cars. It just depended on who got through lapped traffic the best.

“This track was pretty tricky tonight. The surface was definitely different from what it has been. It’s hard to steer, just really slimy. You gotta be in the right spot at the track at the right time.”

Richards’s runner-up finish was a recovery from a dismal start to the race that saw him nearly fall out of the top five. He gradually pulled his Rocket Chassis house car back into the hunt, however.

“Bubba watered the top (groove) and we were kind of skeptical of what it was gonna do,” Richards said of track co-owner Bubba Clem’s pre-race track prep, “and we were trying to get the top run in for that first initial cut. I got my tires greased up and it took me four or five laps to get going and get a rhythm, and then I felt like my car was really good.

"We did what we could. We had a really good car, but the way lapped traffic played out we just let one get away from us."

Notes: The non-stop race took just over 8 minutes to complete. … Polesitter Boom Briggs of Bear Lake, Pa., slipped to sixth at the finish. … Shane Clanton of Zebulon, Ga., ran as high as third before fading to seventh in the final rundown. … Tim McCreadie of Watertown, N.Y., started 24th thanks to a provisional but charged forward to place eighth without the benefit of a caution flag.

Boom Briggs drew the pole position for the 30-lap headliner. Fellow heat winners Josh Richards and Morgan Bagley will start second and third, respectively. … Provisional starting spots were claimed by Mike Hammerle (UMP DIRTcar) and Tim McCreadie (WoO). … Tyler Clem, the 12-year-old son of BRP co-owner Bubba Clem, finished third in the B-Main to transfer to the feature. … After the completion of the V-8 Thunderstock feature at 8:15 p.m., Bubba Clem hit the speedway with his track crew for a short period of surface prep before the 30-lap feature rolls out.

Josh Richards ran away with the final 10-lapper, racing unchallenged to a straightaway triumph over Shane Clanton. Bob Gardner — racing with a heavy heart after learning that his father passed away earlier this afternoon following a battle with cancer — was a strong third-place finisher. Steve Casebolt, Rick Eckert and Rodney Sanders completed the transfers.

Morgan Bagley cruised to a wire-to-wire triumph, beating Darrell Lanigan by a commanding margin of 2.492 seconds. Chub Frank slipped by Mark Whitener coming to the white flag to finish third, while Chase Junghans, who started from the outside pole but was penalized two spots for firing early on the original green flag, settled for a fifth-place finish. Dennis Franklin was the final transfer in the non-stop event.

Boom Briggs dominated the action, leading from flag-to-flag to take the win. Eric Wells fought forward from the fifth starting spot to finish second, grabbing the spot from Frank Heckenast Jr. on a lap-seven restart. Brandon Overton, who ran as high as second, powered by Heckenast in the final circuits to place third. Ivedent Lloyd Jr. relinquished the sixth and final transfer sot to Jordan Yaggy when he slowed on the final lap. Tyler Clem brought out the race's lone caution flag, spinning between turns one and two on lap seven and then heading pitside. TIm McCreadie was an early retiree, pulling in on lap five after his slide high in turns one and two on the opening lap caused him to fall from sixth to last.

Boom Briggs of Bear Lake, Pa., was quickest in time trials, blazing around the 3/8-mile oval in 15.074 seconds. He will start from the pole position in the first of three 10-lap heat races.

The opening night of the Bubba Army Late Model Winternationals features a 30-lap UMP DIRTcar-sanctioned A-Main paying $5,000 to win, giving teams an opportunity to tune up for a pair of $10,000-to-win World of Outlaws Late Model Series events on Saturday and Sunday evenings.

Friday night’s program includes time trials, three heat races, a B-Main and the 30-lap headliner. The heat winners will redraw for the top three starting spots in the feature.

A field of 28 cars is signed in for opening-night action. … Tyler Clem, a 12-year-old middle-school student, will bid to make his first Super Late Model feature start at the track co-owned by his father Bubba Clem. … Billy Ogle Jr. of Knoxville, Tenn., is set for his first Speedweeks action of 2015 in a Stacy Boles team car. Boles will likely enter Saturday night’s WoO competition. … Scott Groves of Canton, Mo., is another new Speedweeks entrant. … Jordan Yaggy of Rochester, Minn., missed Thursday night’s open practice session at BRP because he wasn’t able to fly back to Florida in time. His flight was slowed by a problem: its toilet froze in the cold Minnesota temperatures. … Rick Eckert’s father, Junior, arrived today in his motorhome with reinforcements for his boy, including some spare parts, tires and tools that Eckert left behind in his York, Pa., shop. … Austin Smith of Cedartown, Ga., made it to BRP just in time to turn eight practice laps on Thursday. The 18-year-old’s departure for Florida was delayed until after he finished his Thursday classes at Georgia Highlands College in Rome, Ga. … Austin Kirkpatrick of Ocala, Fla., was the night’s final entry, arriving just as the drivers’ meeting was taking place. ... Bob Gardner of Peoria, Ill., is competing in tonight's action after learning that his father passed away earlier today following a battle with cancer. Gardner said his father's dying wishes were that he continue racing in Speedweeks events, so he plans to enter at least tonight's program before heading home.