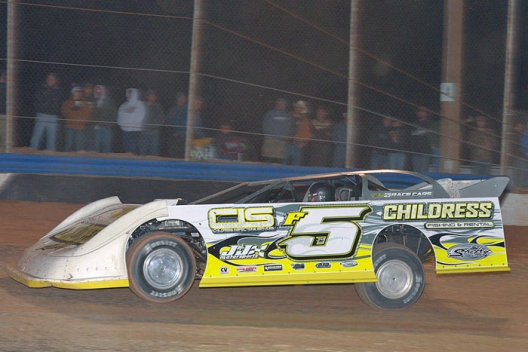 Starting eighth in the Louisiana-based Childress Racing No. F5, Lanigan accomplished his objective. He burst up to fourth place on the opening circuit and calmly disposed of the remaining cars ahead of him in short order, finally grabbing the lead for good from Ronny Lee Hollingsworth of Northport, Ala., on lap 11 en route to a $3,000 triumph that left him 2-for-4 in the mid-winter racing meet.

“We got right up to fourth,” Lanigan said of his explosive first lap. “I think that was definitely the move of the race. If you can up there in the top couple spots, it’s a whole lot easier.”

Lanigan had little trouble completing his march forward, gliding past Jason Krohn of Slayton, Minn., for third on lap four and Garrett Alberson of Las Cruces, N.M., for second on lap six before diving underneath Hollingsworth in tour four to assume command on the 11th tour.

No one drew close enough to challenge Lanigan for the remainder of the race, which was the third consecutive Wild West Shootout Dirt Late Model feature to run caution-free from start-to-finish. He went the distance in just over 10 minutes, beating Dirt Late Model Hall of Famer Billy Moyer of Batesville, Ark., to the finish line by a commanding margin of 3.795 seconds.

Moyer, 57, came from the 10th starting spot to grab the runner-up spot on the final lap, steering past Hollingsworth for the position in his Longhorn Race Car. Wednesday-night feature winner Rodney Sanders of Happy, Texas, also overtook Hollingsworth on the last circuit to finish third, leaving Hollingsworth, who led laps 6-10, fourth in the rundown.

Ryan Gustin of Marshalltown, Iowa, completed the top five in his Gressel Racing Rocket after racing forward from the 18th starting spot without the benefit of a caution flag.

Lanigan showed extreme confidence in his Andy Durham Racing Engine-powered car following his victory, which padded his points lead in the chase for the $2,000 Wild West Shootout championship. The reigning World of Outlaws Late Model Series titlist never doubted his chances of reaching victory lane for the second time.

“We had an awesome piece tonight and could go anywhere we wanted to on the racetrack,” said Lanigan, whose previous Wild West Shootout runs were a win in the Jan. 10 opener, third place on Jan. 11 and a runner-up finish on Wednesday night. “I had a couple (crew) guys giving me signals so we knew where we was at on the track, but the lapped traffic was getting a little tough (late in the A-Main). They held their own, but it was hard to go through the middle and pass those guys. Our piece was good enough where we could do it.”

With four podium finishes in a row, Lanigan clearly has taken a liking to the 3/8-mile USA Raceway.

“It’s actually one of the better tracks I’ve been to,” said Lanigan, who is competing at USA Raceway for the first time in his career. “It races good … you can race all over it, and you can usually come out of here without too much tore up stuff. I like it.”

Moyer, meanwhile, never had a chance to test himself against Lanigan, but he was pleased with his second runner-up finish of the ’15 Wild West Shootout. He also was the bridesmaid in the opener — behind Lanigan, of course.

“The lapped cars kind of had everybody bottled up, and 18 (Hollingsworth) there, he wanted to run around the bottom that lap and I went to the top and it worked out,” said Moyer, who came back strong after scratching from Wednesday night’s action after his car’s engine broke during hot laps. “The 91 (Jason Papich of Nipomo, Calif.) that was lapped there, he was cruising around that bottom and actually passing us back there, and I think Hollingsworth seen that and said, ‘Hell, I’m gonna move down here because the track’s evidently pretty good down there.’

“He really didn’t do anything wrong … he just tried the bottom, and that left the top open for me to try because that’s just what you do when you’re behind on the last lap. It worked out for me.

“We’re not out here to make any money for sure,” he added. “We’re just playing, trying to learn some things that maybe will help us later on in the year. We’re trying a lot of different packages on our car. It didn’t feel so good tonight, but probably everybody didn’t feel good because the track was so slick, so we’re happy with what we got.”

Sanders, 25, also was satisfied with his performance in his Club 29 Race Car.

“We’ve been pretty consistent out here and I can’t really ask for much more,” said Sanders, who won Friday night’s open-wheel modified feature. “I got a lot of respect for Lanigan, Moyer, (Jimmy) Mars, (Jimmy) Owens, all those guys. It’s kind of an honor to be out there racing with them.”

Hollingsworth, who turned 30 on Jan. 9, was disappointed to fall two positions on the final lap but was pleased with an outing that turned around his moribund week. His 17th-place finish on Jan. 11 was sandwiched by a pair of DNQs.

“I felt like we had a second place car, no doubt,” said Hollingsworth, who started fourth in his Black Diamond machine. “But with the way our week’s been going, we’re excited to have a competitive run and at least feel like we’ve got something to work with the next two days and take back home. I feel like we’ve learned a lot and built a good notebook out here about things to do and not to do.”

“I come up behind that Little Billy (Moyer Jr. of Batesville, Ark.) and that 42 (Don Shaw of Ham Lake, Minn.) and they was just kind of in my line, and then when I moved around to try and pass them I wasn’t any good. That let them other cars slip by me.”

Other leaders in the feature were outside-polesitter Krohn (lap 1) and the polesitting Alberson (2-5).

Notes: Lanigan was involved in a heated moment during the second heat after his last-lap pass of Billy Moyer Jr. for the lead sent Moyer over the cushion in turn two. The younger Moyer pulled alongside Lanigan to express his displeasure on the cool-down lap, and an angry Lanigan then said when asked about Moyer in a post-race interview on the pay-per-view broadcast that “if it weren't for his daddy, he'd be nobody.” ... The only retirees from the feature were R.C. Whitwell of Sahuarita, Ariz. (lap 6), Jimmy Owens of Newport, Tenn. (lap 14) and Terry Phillips of Springfield, Mo. (lap 19). … Adam Hensel of Baldwin, Wis., saw his third-heat run ended when he slapped the turn-two wall on the opening lap. He scratched from further action. ... Tyler Erb of Magnolia, Texas, led the third heat until jumping the cushion and hitting the turn four wall on lap six after eventual victor Rodney Sanders slid by for the top spot. ... Billy Moyer appeared headed to a runner-up finish in the fifth heat until bursting underneath Papich off turn four with the checkered flag flying to steal the victory by less than a half car length. … Among the evening’s non-qualifiers were World of Outlaws Sprint Car Series star Donny Schatz of Fargo, N.D., Chase Junghans of Manhattan, Kan., Pat Doar of New Richmond, Wis., and Tony Toste of Santa Maria, Calif. (fifth-place finisher on Wednesday night).

A 52-car field has signed in for Round 4 of the six-race Keyser Manufacturing Wild West Shootout — the largest turnout of the miniseries. … Among the week’s first-time competitors is Raymond Merrill of Sallisaw, Okla., who will go to the post in Sunday-night winner Tony Jackson Jr.’s second car. Merrill plans to run about 20 events this season in a Jackson machine and some others in a team car to Jack Sullivan of Greenbrier, Ark. … Tonight’s program will mark the first time of the ’15 Shootout that Jason Krohn of Slayton, Minn., will drive his Dirt Late Model. He won Wednesday night’s open-wheel modified feature. … Speaking of Krohn, his daughter, Samantha, has arrived in Tucson to watch the remainder of the Shootout — two days too late, however, to witness the very special Wednesday show that saw her father capture the modified A-Main and her boyfriend, Rodney Sanders of Happy, Texas, win the Dirt Late Model feature. … Paul Guglielmoni of Vacaville, Calif., has towed in to make his first start of the '15 Shootout . ... Clay Daly of Watsonville, Calif., has a backup Cornett engine installed in his Pete Van Iderstine-owned Warrior car after a broken powerplant forced him to scratch from Wednesday night’s action. … Lucas Oil Late Model Dirt Series regular Earl Pearson Jr. of Jacksonville, Fla., is spectating in the pit area after flying out to Tucson to take care of some business — going over the details of his 2015 ride with car owner Larry Moring, whose car Pearson will drive in a handful of special events. Black Diamond/Club 29 chassis guru Ronnie Stuckey, who oversees Moring’s racing effort, is also on hand after flying home to Louisiana after last weekend’s action and skipping Wednesday’s show. … Pro Power Engines’ Bill Schlieper is hobbling around the pit area with a boot on his left foot after suffering a bad cut on his toe while walking out of Jimmy Mars’s rig on Thursday. He had to visit a local hospital so doctors could close the deep wound with eight stitches.