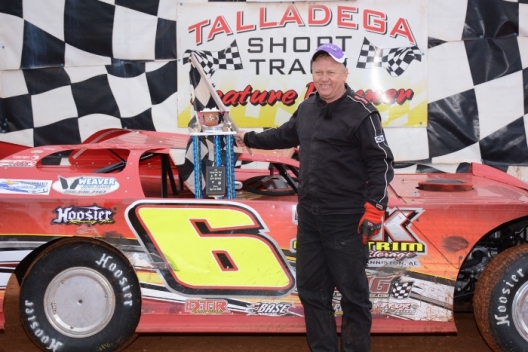 Picking up a win in Saturday’s first heat race, Roszell started on the pole of the 50-lap event, outdueling the 2014 Ice Bowl champion William Thomas of Phenix City, Ala., to make his way to victory lane.

“We just had a really, really good car from the first lap and the car never gave up, except at the end when we had that last caution, my brakes went out,” Roszell said after the race. “They were real spongy, real low to the floor, and I just sat up there long enough for them to build back up and we was good to go.”

The race was slowed by four cautions, but Roszell  used the yellow flags to his advantage, charging ahead of the field and besting Williams and third-place finisher Riley Hickman of Ooltewah, Tenn., at the checkers. Third-starting Donald McIntosh of Dawsonville, Ga., and fifth-starting Billy Ogle Jr. of Knoxville, Tenn., tangled across the finish line, finishing fourth and fifth.

“It’s kind of like a highlight of your career. Being raised around here, 10 minutes from the track, and you race here all the time … it’s kind of like winning the Super Bowl.”

While back-to-back Ice Bowl victories would have made for an ideal ending to his weekend, Thomas was pleased with his runner-up finish. Though he was never able to seriously challenge Roszell for the lead, Thomas held on to his second-place starting spot.

“We haven’t been really good all weekend, we’ve been struggling a little bit with this new car,” Thomas said. “But it’s been getting better and better. For us to come home second starting on the outside, that’s pretty much a win for us coming here. We’re happy with it.

“We’re consistent for sure. We’d like to win, but we have a little work to do and we all know that. So we’ll work it, and come back to the next race and see if we can’t win that one.”

Making a last-minute decision to travel to Alabama for the Ice Bowl, seventh-starting Hickman said he was glad to come away with a third-place finish, especially after a first-lap tangle sent him pit side with a flat tire.

“We weren’t supposed to be coming here,” Hickman said. “We were supposed to be going on a cruise. My work schedule kind of changed there on Friday, so we ended up coming down here Saturday morning and running this deal, so we weren’t really prepared to come. But I’m glad we did. We came and got a top-five and that’s a good start for our year.

“We got a flat there, but we got it took care of before it went green and we hadn’t made a lap, so they gave us our spot back and went on from there. It bent something in the front end, but you’ll about have to drive through somebody to pass them here. I’m just happy to come out with it rolling.”

The first of four cautions flew before the first lap was completed when Eric Cooley of Fulton, Miss., spun in turn two, collecting a handful of cars. Frank Ingram of Woodstock, Ga., drew a caution on lap 16 when he slowed in turn three with a right-rear flat. A yellow flew on lap 28 when Cory Hedgecock of Loudon, Tenn., spun in turn three. The final caution fell on lap 42 when Ross Martin of Talladega, Ala., and Jason Hiett of Oxford, Ala., tangled in turn two.