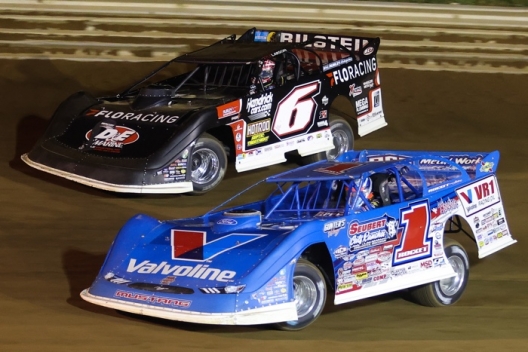 It wasn’t easy for the 30-year-old NASCAR Cup Series champion from Elk Grove, Calif. — not with three drivers rising up to challenge him at various points in the Lucas Oil Late Model Dirt Series event, including Brandon Sheppard of New Berlin, Ill., in the final circuits.

But using all of his vast stores of talent and with a healthy dose of good fortune throw in, Larson held on to capture the $30,000 top prize in his first-ever start in the Carl Short-promoted race.

Larson beat Sheppard to the finish line by 0.466 of a second following a restart with seven laps remaining. Lucas Oil Series rookie Garrett Alberson of Las Cruces, N.M., finished third, followed by tour points leader Tim McCreadie of Watertown, N.Y., and Josh Richards of Shinnston, W.Va., who won the last running of the Hillbilly 100 in 2019.

The latest Hillbilly 100 winner was a thankful racer after he climbed out of his K&L Rumley Enterprises Longhorn No. 6.

“That might be one of the luckiest races I’ve ever had,” Larson conceded after

Indeed, there were multiple times when Larson very nearly gave up the lead while working through lapped traffic only to be saved by a caution flag. On three occasions, in fact, Larson crossed the start-finish line in a virtual dead-heat with Sheppard, and midway through the feature Alberson drew close enough on the homestretch to make contact with Larson.

Even teenager Garrett Smith of Eatonton, Ga., briefly threatened Larson just before the race’s halfway mark until a flat tire forced him to relinquish second during a lap-53 caution period.

“The cautions just fell at exactly the right times when I needed them to — every time I’d start seeing their nose to my inside,” said Larson, who became the 20th different winner in Lucas Oil Series action this season. “I wasn’t any good running around the bottom so I knew I was kind of in trouble. Then the caution would fall and I’d get some clean track and at least get to click off about 10 laps or so before I got to traffic.

“There was laps when I felt like I could get my angles right in traffic and get my wheel-spin underneath me, but most laps if I moved down below the banking I was struggling. I felt good, though, in clean air, but I just don’t know how to run these things bent and around the flat on the bottom, so I just felt better to get up on the banking and lean into that.”

Larson felt that his rivals were “much better than me in traffic and were probably doing a better job moving around,” but he found a way to maintain command while working through slower cars just long enough for each of the race’s seven caution flags to provide him a needed breather.

“I had to get aggressive a couple times with some lappers just to get clear,” Larson said, “and that really saved some of my race in the middle portions.”

Sheppard, 29, wasn’t able to complete a pass of Larson while he ran second for laps 1-44 and lap 80 through the race’s checkered flag in Mark Richards’s Rocket Chassis house car.

“We were right there a lot of times, but he had good speed running up there in the banking,” Sheppard said. “We just couldn’t make anything happen. I thought we were going to in lapped traffic a few times but the caution kept coming out.

“We needed a Please Stay Green,” he added, referring to Lucas Oil Series announcer James Essex’s famous plea for a nip-and-tuck race for the lead to not be interrupted by a caution flag. “We were right there that last seven laps, but he just had good momentum up there on the top. You would’ve had to do something crazy to get around him and that’s not how I roll.”

Sheppard mourned his missed opportunity at the A-main’s initial green flag. He started from the pole position but couldn’t stay ahead of Larson, the race’s second starter.

“I made a big mistake not getting the lead on the first lap here,” Sheppard said. “I did that the last time Kyle and I started on the front row together too (in Larson’s first-ever Dirt Late Model victory on Aug. 29, 2020, at Pennsylvania’s Port Royal Speedway), so I definitely gotta do better than that.”

The 33-year-old Alberson had a shot at Larson as well but couldn’t convert.

“I wanted to win that thing bad. I really wanted to,” said Alberson, who is still seeking his first Lucas Oil Series victory with Ken Roberts’s team. “I really thought we had a shot there for a minute. I got one good run (on lap 69) … (Larson) was kind of trying to figure out what to do and I got one good run off of four there. I’m sure he felt me because I kind of jacked him up a little bit because that was my one shot.

“In lapped traffic I could kind of get out a little bit wider and still make speed, but he had that one momentum lane there. I was a little tight to get all the way down to that bottom in three and four.”

Larson was victorious in his second night back in a Dirt Late Model after an extended absence from the division.

“I haven’t gotten to race the Late Model a lot here the last few months,” said Larson, whose 14th-place finish in Wednesday’s Castrol FloRacing Night in America event at Atomic Speedway in Alma, Ohio, was his first Late Model start since July 30’s Prairie Dirt Classic at Fairbury (Ill.) Speedway. “I think we won our prelim night at Fairbury and then we won here, so I think we’re two of the last four races, which is cool. And a big win here too, a 100-lap race, the Hillbilly 100. Really neat.

“I had a lot of fun here last year, and when I heard that they rescheduled this race, Kevin (Rumley) texted me, and I was all about it. Glad I could get here.”

Larson struggled to find his comfort zone early in the night, but he eventually figured out a style that worked best for him on the quarter-mile bullring.

“I was texting (driver) Brandon Overton after the heat race because I didn’t feel good at all then, and he’s really good everywhere really, but especially on this kind of surface,” Larson said. “He told me to take care of my tires when I got some laps in, but I just ran hard the whole time. I didn’t want to try and slow down and get caught trying to save too much.

“I feel like a lot of times in Late Models I always qualify good, win heats and start up front and start to take care of my stuff and just go backwards, so I just tried to run hard the whole time. I don’t know if benefitted me or not, but when the lanes got cleaned off I could get grip, and sometimes I’d miss it a little bit but my car felt good enough that I could stay up front … and I got real lucky with the cautions too.”

The first of the race’s seven cautions flew on lap six when Tyler Carpenter stopped with nose damage in turn four. Larson and Sheppard narrowly escaped involvement in a turn-four incident on lap 14 that involved Daulton Wilson, Freddie Carpenter, Jacob Hawkins and Spencer Hughes, while seventh- and eighth-place runners Boom Briggs and Kyle Thomas ended up stopped in turn one on lap 15.

Additional slowdowns were displayed for Thomas slowing in turn four on lap 45; Tyler Erb’s flat tire on lap 53; Freddie Carpenter slowing on lap 74; and Wilson falling off the pace on lap 93.

Notes: Larson’s three previous Late Model victories this season came on April 26 at Eldora Speedway in Rossburg, Ohio (Castrol FloRacing Night in America), May 12 at The Dirt Track at Charlotte in Concord, N.C. (XR Super Series) and July 29 at Fairbury (PDC prelim). His two previous Lucas Oil Series wins came on Aug. 29, 2020, at Port Royal and Jan. 23, 2021, at All-Tech Raceway in Ellisville, Fla. … Larson became the 35th different winner in the 51 runnings of the Hillbilly 100, which was cancelled in both 2020 and ’21. … McCreadie led the first seven laps of the second heat race before losing a right-rear tire entering turn three on the final lap and limping across the finish line in second place; Boom Briggs snuck by him for the victory. ... Ricky Thornton Jr. slapped the turn-three wall in the fourth heat but recovered to earn the final transfer position. ... Three-time Hillbilly 100 victor Scott Bloomquist planned to compete Thursday but ran into trouble during the afternoon when his trailer slipped into a ditch several miles from the track. It took several hours for adequate tow truck to reach him; he arrived late to the track and never turned a lap. … Jared Hawkins saw his plans to enter the event were scrapped due to his car owner Tim Logan’s illness.