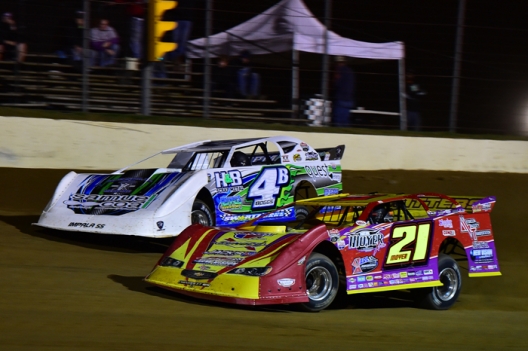 “It’s pretty good,” Carrier said after Friday’s redraw. “It seems like we struggle here sometimes at Portsmouth. We made a few changes on the car while we was off and felt pretty good in the heat. We got a little bad at the end, but I think that was a tire. We’re hoping for a good 100-lapper tomorrow. It don’t really matter where you start, it matters where you finish.”

Moyer, winner of the 1996 DTWC, nabbed a victory in Friday’s second heat race after an early battle with polesitter Jackie Boggs of Grayson, Ky. He’ll lineup outside the front row in Saturday’s DTWC.

“We started there on the front and got into second there off the bat,” Moyer said of his heat race. “Jackie (Boggs) is hard to beat here at Portsmouth, so I knew I had my work cut out. But the car was pretty good. We was just able to run a little bit lower than him and got by and then just kind of tried to keep the tires on.”

While he admits he has his work cut out for him, Moyer said he likes the position he’s in going into Saturday’s main event.

“We’re in the right spot for sure,” Moyer said. “But 100 laps is a lot around here. We’ll just try to make the right decisions and get the job done hopefully.”

Jimmy Owens of Newport, Tenn., took the lead on the second lap of the fifth heat race and led the remaining distance to pick up a win over fellow Lucas Oil Series contender John Blankenship of Williamson, W.Va. He drew the third starting spot for Saturday’s feature.

“I had a good car,” Owens said after Friday’s heat race. “Qualified good, probably should of qualified a little better than we did … missed the track a little bit. I was able to get the lead in the heat there and hold them off.”

The top three cars from each heat race transferred to Saturday’s 100-lapper. Consolation races will be contested Saturday to set the lineup for the remainder of the field.

In a redraw among Friday's six heat race winners, Eddie Carrier Jr. pulled the pole for Saturday's 100-lap main event. Billy Moyer will start alongside Carrier, while Jimmy Owens and Scott Bloomquist are scheduled to roll off from the second row. Jonathan Davenport and Don O'Neal redrew the fifth- and sixth-place positions, respectively.

Outside polesitter Jimmy Owens charged past fellow front-row starter Devin Moran on the second lap, topping runner-up finisher John Blankenship in the 20-lap race. Blankenship took the second-place spot from Moran on the seventh lap and held it the rest of the way. Doug Drown nabbed the third-place spot at the checkers after a late-race challenge from fourth-place finisher Scott James. Moran slowed with a flat on the 12th lap while running and rejoined the race at the tail of the field after a trip to the hot pit. Bobby Pierce pulled his smoking No. 32 machine pit side on the lap-12 restart. Steve Shaver drew a caution on lap 16 when he got into the front stretch wall.

Seventh-starting Don O’Neal overtook outside polesitter Brandon Overton with a highside rally on the seventh lap and led the remaining distance in the caution-plagued fourth heat. Polesitter Jason Feger held on to finish second, with fifth-starting Frank Heckenast Jr. grabbing the final transfer spot. Overton finished fourth, while Jared Landers, who ran as high as second, rounded out the top five. Chris Combs drew a caution on lap four when he slowed on the front straightaway and retired. A second yellow flew when Ben Adkins spun in turn four collecting Chad Hollenbeck. The race was slowed by another caution on lap 12 for a tangle involving Adkins, Hollenbeck, Rick Mardis and Casey Noonan. Maris spun for another yellow on lap 13.

Polesitter Scott Bloomquist dominated all 20 laps comfortablyl beating runner-up finisher Josh Richards to the checkers. Last year’s DTWC winner Brandon Sheppard finished third, with Dale McDowell running in the fourth-place spot. Lucas Oil Series Rookie of the Year contender Jason Papich rounded out the top five. Mike Marlar got into the wall while racing for fourth on the third lap and retired to the pits. Kenneth Howell spun on the first lap ending his night early.

Front row starters Billy Moyer and Jackie Boggs battled side-by-side for the first five laps, with Moyer eventually pulling away to dominate the second heat. Daniel Williams spun for the first caution on lap seven and sixth-starting Steve Francis charged to the second-place spot on the ensuing restart. Boggs went back by Francis on the ninth lap following a caution for debris on the racetrack. Third-running Francis slowed on the racetrack to draw a caution on lap 17. Boggs and Mason Zeigler made contact on the restart, with Boggs slipping to fifth. Another yellow flew with two laps remaining when Duane Chamberlain and Michael Smith tangled in turn one, bringing the field together once again. Zeigler finished in the runner-up spot with track regular Rod Conley finishing third to transfer to Saturday’s feature. Boggs finished fourth while Tim McCreadie rounding out the top five.

Third-starting Jonathan Davenport slid by polesitter R.J. Conley on the second lap and led the remaining distance. Sixth-starting Gregg Satterlee nabbed the runner-up spot on the final lap, with Conley holding on to finish third, taking the final transfer spot. Outside polesitter Jimmy Mars slipped to fourth on the initial start and finished fifth. Shannon Thornsberry got into the wall on the first lap and was the first retiree. The first caution flew on lap five for Larry Farrell and Victor Lee when they tangled in turns three and four. A second yellow flew when Rick Bond, Kevin Wagner and Zack Dohm piled up in turns one and two. Lee and Dohm drew another caution on lap 14 when they tangled in turn two.

The Late Model portion of the event will get under way tonight. Friday’s preliminary action will include time trials and heat races that will set a portion of the field for Saturday’s $50,000-to-win 100-lapper. With 89 cars on hand, there will be six heat races with the top three cars transfering to the main event.

Late Model teams began filling the pits late Thursday evening as the modified program rolled on. … The 2015 National Dirt Late Model Hall of Fame class will be announced prior to Saturday’s racing action. The induction ceremony will take place at the North-South 100 in August. … Last year’s DTWC winner Brandon Sheppard of New Berlin, Ill., will be piloting a second Rocket Chassis house car as a teammate to Josh Richards of Shinnston, W.Va., who is making his second start of the 2014 season after being sidelined with nerve damage to his hands. … Scott Bloomquist of Mooresburg, Tenn., and local favorite Jackie Boggs of Grayson, Ky., were winners of the Lucas Oil Series events held at PRP earlier this year. … Jimmy Owens of Newport, Tenn., was the winner of the 2012 DTWC in its inaugural year at PRP. … Don O’Neal of Martinsville, Ind., enters the weekend with a 75-point advantage over Owens in the Lucas Oil standings. … Ben Adkins of West Portsmouth, Ohio, is PRP’s 2014 track champion with three victories at the racetrack this season. … Delmas Conley and R.J. Conley of Wheelersburg, Ohio, are among other 2014 feature winners at PRP expected to be on hand for this weekend’s event. … Doug Drown of Wooster, Ohio, and Victor Lee of Danville, Ky., are among drivers pulling double duty in Late Models and modifieds. ... Steve Shaver of Vienna, W.Va., is driving a Brad Malcuit-owned Rocket machine that was just purchased from Davey Johnson of Latrobe, Pa., and still sports Johnson's colors and sponsors. The only change is an 'S' covering the 'J' after Shaver's No. 1. … The 89-car field is 10 better than last year's turnout but five less than the 94 entries that were on hand for the first DTWC at Portsmouth in 2012. … Jared Landers's car sports a pink No. 777 and accents in recognition of Breast Cancer Awareness Month, while John Blankenship has added a red, white and blue color scheme to his bodywork for the weekend. … Tyler Carpenter of Parkersburg, W.Va., is driving his father Freddie's No. c4.