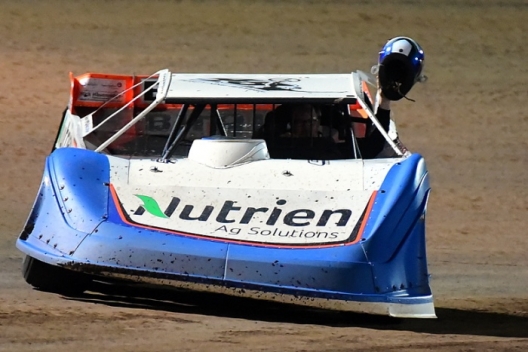 The 38-year-old Blairsville, Ga., polesitter ended up making all the right moves in the 35th USA Nationals, turning back challenges from runner-up Chris Madden of Gray Court, S.C., and third-finishing Tyler Erb of New Waverly, Texas, to officially lead all 100 laps and collect the $50,000 payday and event’s Eagle Trophy for the the third time and second straight season.

“I don't know if I did everything he said,” Davenport said, thanking Durham for his backstretch hand signals in the World of Outlaws Case Late Model Series event. “But he was definitely helping me out there. He was helping me out a whole lot there.”

The instruction-following Davenport notched his fifth victory of the season paying at least $50,000, his fourth of the season with the World of Outlaws and the 14th of his career on the national circuit.

While Erb briefly slipped by a few times, and Madden nearly did the same, Davenport was officially scored a 100-lap leader in taking the checkers 0.877 of a second ahead of Madden, his fellow front-row starter whose late bid to overtake the winner was stymied by traffic.

Erb won a late-race duel with Ricky Weiss of Headingley, Manitoba, for the third position while four-time WoO champion Brandon Sheppard of New Berlin, Ill., rounded out the top five.

Mike Marlar of Winfield, Tenn., rallied from his 20th starting spot to finish sixth, ending his lengthy streak of top-five finishes stretching back to mid-June, while WoO points leader Dennis Erb Jr. of Carpentersville, Ill., took a provisional starting spot and rallied from 25th to eighth.

Davenport, who became the third driver behind Hall of Famers Billy Moyer and Scott Bloomquist to win Cedar Lake’s marquee event three times, led comfortably for stretches, but had his hands full with Madden and Erb several times in the 100-lapper.

Erb’s most serious challenges came with slide jobs that carried him into the lead on back-to-back laps with fewer than 40 laps remaining, but each time Davenport made a crossover move before a caution quelled the challenge.

Madden’s most serious challenge made in the final laps when he made a bit on the outside that drew within three-tenths of a second of Davenport, but lapped traffic helped the leader turn back Madden’s bid.

“What a great race car. We unloaded and we set quick time, but I just wasn't comfortable with it. It was good (that) we had speed — I just had to get get comfortable with it,” Davenport said, thanking his crew. “We kept working on it and kept working on it. Vinny (Guliani) made some good calls on shocks. Jason made some good calls on spring combinations. Tyler (Bragg) done an excellent job on the tires; they never gave up.”

Davenport not only beat a 28-car field, he also beat the weather on a day when rain deluged the track early before daunting weather forecasts for the evening gave way, though the race began with mist falling from the sky.

"I can't believe we got it in,” Davenport said. “You know, the forecast was awful all day. So thanks for World of Outlaws for sticking it through and pushing through and the track crew here at Cedar Lake did an excellent job.”

Madden’s designs on overtaking Davenport in the final laps fell by the wayside when the frontrunners approached slower cars that spoiled his charge.

While Davenport watched signals from his crew chief, Madden saw them too — and knew how effective they were.

“He’s gotta give Jason half the check,” a smiling Madden said of his rival. “He moved him everywhere he needed to be every lap, so he’s going to have to pay (Durham) good this week. But you know, congratulations to them guys. We've been 1-2 all year long, flopping back and forth. And Terbo got in the mix there. I think we put on a heck of a show for the fans. … We gave it all we had.”

Erb bemoaned the caution that kept him from continuing his slide-job assault on Davenport, and when he tried to reel in the leader with fewer than 20 laps remaining, the leader’s groove change helped him maintain command.

"I don't know how many (laps) it was to go there when I kind of got close to J.D. and they just moved him up just enough to mess me up,” the driver for Ohio-based Best Performance Motorsports said. “We had to race a little bit with Chris and Ricky. When Ricky crowded me, we hit the back straightaway wall and I was able to get back by him. All in all, it was good. I love coming here and this is a good two weeks for us. We're kind of turning things around. … So just trying to keep building on this and finally get us a big win.”

Other cautions: Jake Timm spun on lap 76; Ashton Winger’s flat on lap 73; Brandon Overton spun on lap 64; seventh-running Kyle Strickler jumped the cushion and stopped on lap 60; Cade Dillard spun on lap 53; Ryan Gustin slowed on lap 51; Chad Mahder got into the wall on lap 36; and shortly after the ensuing restart, Bruening and Jason Feger had a frontstretch tangle that left both cars facing the wrong direction (Feger retired).

Notes: Davenport led 12 laps in his 2021 victory at Cedar Lake and 78 in his 2015 victory.  … Bobby Pierce of Oakwood, Ill., ran as high as third but retired during a lap-60 caution with a hole in his radiator. … Garrett Smith of Eatonton, Ga., started 17th and ran as high as sixth before falling from contention midrace.

After Pat Doar took the checkered flag first in the 40-lap Cedar Lake Late Model feature — track management moved the race up to precede the USA Nationals finale — WoO officials blew the 10-minute horn at about 7:40 p.m. CDT to call the 100-lap feature field to the staging area. With a light mist falling as track-prep work was being completed, officials plan a shorter version of Cedar Lake’s traditional driver introductions before sending the 28 starters off to chase the $50,000 top prize.

With the weather continuing to hold out — and the chance of rain dropping — hot laps for the B-main starters hit the track right on schedule at 5 p.m. CT. The track surface was quickly run in and practice for the WoO and Cedar Lake Late Models was completed for opening ceremonies to begin at 5:20 p.m.

The first of two WoO B-mains rolled onto the track just before 5:30 p.m. — minus, however, scheduled pole starter Jimmy Mars of Menomonie, Wis., a two-time USA Nationals champion who has scratched from Saturday’s competition.

A Saturday that appeared to be headed toward a total washout — one early-morning forecast briefly predicted 3-5 inches of rain for the New Richmond area — has trended in a positive direction through the afternoon. Rain did fall in the morning but ceased shortly after noon, and the chance of precipitation continues to fall in the latest forecasts.

The possibility of rain remains through the night, though, so Cedar Lake and WoO officials are sticking with the earlier start time of 5 p.m. CT for hot laps and released an updated schedule of events to provide the best opportunity of completing the WoO-sanctioned USA Nationals on Saturday. The order has been altered with the 15-lap WoO consolations running first after opening ceremonies, followed by heats for the Cedar Lake Late Models; the 15-lap WoO last-chance race; track prep; and the 100-lap feature. The consolations and 40-lap feature for the Cedar Lake Late Models will close out the program.

Fourth-starter Chris Madden finished 1.963 seconds behind Davenport in second place, putting him on the outside pole for a race he won in 2019.

Brandon Sheppard made the biggest advance forward, hustling from eighth to a fifth-place finish.

Teenager Garrett Smith scored a wire-to-wire victory in the 12-lap FANS Fund Dash, beating Jason Feger to the finish line by 0.590 of a second. He earned $3,000 from the over $30,000 in travel bonus money that was divided among the 11 drivers who were invited to the USA Nationals through the fan-backed program. Each driver was guaranteed a minimum of $2,400.

Before the draw for position among drivers in the Pole Dash, Cedar Lake Speedway officials announced a slight update to Saturday’s schedule of events in light of rain in the forecast. Officials are tentatively eyeing a 5 p.m. CDT start for hot laps, an hour-and-a-half earlier than previously posted.

Officials noted that fans and competitors should keep a close eye on social media on Saturday morning for further updates. Track and WoO officials plan to have a conference call at 10:15 a.m. to discuss the forecast and determine if the start time should be moved up even earlier in hopes of completing the entire program.

Those eight drivers will compete in this evening’s Pole Dash. The finishing order of the sprint will determine the starting lineup for the first four rows of Saturday’s 100-lap, $50,000-to-win USA Nationals feature.

Tyler Erb’s Heat 3 victory from the sixth starting spot earned him 125 passing points, putting him atop the standings after the first round of prelims.

Sunny and hot (a high topping 90 degrees) prevail for Friday’s USA Nationals qualifying program, which features two rounds of five 12-lap heats. The prelims were aligned by random draw (first set) and inversion (second set) and combined passing points will be used to determine the 16 drivers who move on to Saturday’s 100-lap, $50,000-to-win finale. … The top eight drivers in passing points tally will run a dash this evening; the finish will determine the lineup for the first four rows of the USA Nationals headliner. … Friday’s 46-car field includes former event winner Jimmy Owens of Newport, Tenn., who didn’t compete in Thursday’s World of Outlaws Cade Late Model Series show won by Mike Marlar of Winfield, Tenn. … With Saturday’s weather forecast trending in an unfavorable direction — a strong chance of showers and thunderstorms beginning in early afternoon — WoO officials said during Friday’s drivers’ meeting that they will closely watch the updates and look to adjust Saturday’s schedule to take advantage of the best window in the weather. … Chris Madden of Gray Court, S.C., debuted a new Rocket car on Thursday, but after bending up its sheet metal in a feature fracas he’s opted to enter his older, proven machine in Friday’s action. … Ricky Weiss of Headingley, Manitoba, will pull double-duty, adding competition in Cedar Lake’s Late Model division behind the wheel of a brand-new Sniper Chassis. … Ryan Gustin of Marshalltown, Iowa, has some extra incentive to perform well on Friday: the grounds are crawling with people wearing shirts of his sponsor, Tri-Star Transmissions, which is entertaining a contingent of its employees in Cedar Lake’s hospitality area. … Kyle Strickler of Mooresville, N.C., dropped out of Thursday’s feature after breaking the rod on his car’s left-rear bottom bar. … Australian Kye Blight appeared headed to a transfer spot in a Thursday heat when a broken oil pump knocked him from the race. He has pulled out his second car, the machine that his car owner, Paul Stubber, ran throughout the recent DIRTcar Summer Nationals. ... Steve Francis and his wife, Amanda, arrived at Cedar Lake on Friday to start their new roles working with the WoO tour. Steve is serving as Director of Competition while Amanda will work with the series's fan engagement team.