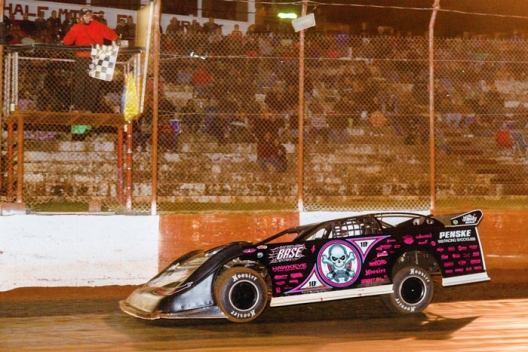 Racing one day after spinning out of the lead at Rome’s sister track, Dixie Speedway in Woodstock, Ga., Bloomquist dominated Sunday evening’s action, completely sweeping the Rome Showdown program — fast time, heat and 50-lap feature — to ring up his seventh victory of the season on the Lucas Oil Late Model Dirt Series.

With his convincing flag-to-flag score, Bloomquist, 50, of Mooresburg, Tenn., also snapped a tie with Jimmy Owens of Newport, Tenn., atop the national tour’s alltime win. He earned $10,000 for his 53rd career Lucas Oil Series triumph, providing additional satisfaction to a memorable rebound performance.

“Last night was pretty disappointing,” Bloomquist said of his twirl in Saturday night’s Dixie Shootout that knocked him from the lead on lap 15 of the 50-lap A-Main. “We ended up somehow our three-wheel brake switch got flipped on us, and when I got in (lapped) traffic there and had to get on the brakes harder than what I was racing I just turned the car around.

“We felt like we gave one away,” he added. “We knew we had a fast car … it was just one of those things. That’s the first time that’s ever happened.”

Bloomquist had no such trouble at Rome. Taking advantage of a pole position starting spot, he kept his Sweet-Bloomquist machine comfortably out front through a series of eight caution flags to reach the checkered flag with a hefty margin over Brandon Overton of Appling, Ga., and Dixie Shootout winner Chris Madden of Gray Court, S.C., who combined to give Bloomquist-designed cars a sweep of the race’s podium.

Don O’Neal of Martinsville, Ind., improved one position to finish sixth, pushing his Lucas Oil Series points lead to 75 markers over Owens with only the Oct. 17-18 Dirt Track World Championship at Portsmouth (Ohio) Raceway Park left on the circuit’s 2014 schedule. Owens, who is bidding for a fourth straight championship, finished ninth after rallying from a broken shock that forced him pitside for repairs on lap 33 as he ran in second place.

Bloomquist’s biggest obstacle during the headliner was finding a way to carefully negotiate the half-mile track’s rough corners.

“I tried a lot of different ways through it, but it stayed wetter down there and that’s where (the clay) was still red so you really needed to stay down there as much as possible,” Bloomquist said. “I finally got where I could enter a little bit higher to stay out of the real nasty stuff with my front end.”

Moving higher on the oval, of course, was never really an option for Bloomquist, who didn’t want to risk becoming one of the drivers who slowed with a flat tire late in the distance.

“That’s one of the reasons I never got way up high,” Bloomquist said of his strategy. “That’s kind of a thing about this place — sometimes it might be faster to run right up there where there’s still a little bit of red, but there’s always all these really sharp rocks laying there and usually you’ll get a flat. So we try to focus on setting up to run low even if it’s rough.”

Crossing the finish line in front of two cars from his chassis-building business put a fine cherry on top of his night.

Bloomquist pointed out that Overton’s Troy Baird-owned machine is one of his older designs — not the new-style mounts he and Madden ran at Rome — but “it can still get it done too.”

Indeed, the car carried the rising Overton, 23, to a solid runner-up finish, matching his career-best on the Lucas Oil Series. He previously finished second on June 20 at Cherokee Speedway in Gaffney, S.C.

Overton started on the outside pole and quietly chased Bloomquist for the entire distance. He had thoughts of making a go-for-broke bid for the win but he thought better of it.

“I was trying not to do nothing stupid,” said Overton, “but I wanted to (challenge Bloomquist).”

“We tightened up a little bit too much for the feature,” Madden said. “We couldn’t turn getting in the corner.”

Notes: The caution-plagued event ran event until after 11 p.m. ... After pitting on lap 33, Owens borrowed a shock from the car of early-retiree and long-time friend Mike Marlar of Winfield, Tenn., allowing him to rally back to finish ninth. He had topped his championship rival O’Neal head-to-head in the night’s second heat. ... Dale McDowell of Chickamauga, Ga., who finished second at Dixie, broke an oil line on the fifth lap. ... John Blankenship of Williamson, W.Va., brought out the race’s first caution on the second lap. ... Shane Clanton, Clint Smith (driving one of Clanton’s cars for the second consecutive night), Randy Weaver and Jason Hughes were other early retirees. ... Hughes’s 19th-place finish allowed 10th-place finisher Jason Papich of Nipomo, Calif., to close with 35 points of Hughes in the battle for the Lucas Oil Series Rookie of the Year award. … Last year's Lucas Oil Series race at Rome was rained out.