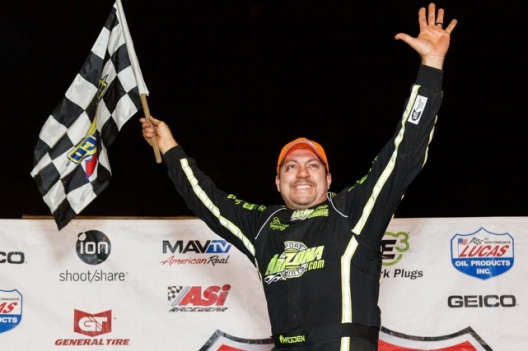 Given life after his chassis builder, Scott Bloomquist of Mooresburg, Tenn., spun out of the lead on lap 15 while negotiating lapped traffic, Madden turned up the wick to pass Dale McDowell of Chickamauga, Ga., for the top spot on lap 33 and marched on to capture the Lucas Oil Late Model Dirt Series event for the second consecutive year.

Madden, 39, earned $10,000 for his second Lucas Oil Series triumph of 2014 and the seventh of his career. He beat McDowell of the finish line by nearly a full straightaway after gliding away from the pack following the race’s third and final caution flag on lap 43.

Madden, who started fourth, wore a big smile after reaching the checkered flag first but acknowledged that the 50-year-old Bloomquist would have been tough to beat.

“I hate that for Scott,” Madden said of Bloomquist, who started from the pole position after finish 11th after his spin forced him to restart at the rear of the field. “He’s been really good all year. He just got in lapped traffic there and I think a lapped car got into him and spun him around.

“Hat’s off to him for what he’s done for me and my racing career. He built me a new ride (Sweet-Bloomquist Race Car) to race with here at the end of the year. It’s been awesome. It feels like driving a Cadillac now. This thing is really unbelievable. I’m excited about getting to race the rest of the year in it and start off next year.

“We had a very good race car,” he added. “I don’t think we could’ve been much better.”

Racing in front of one of the largest crowds ever to witness the Dixie Shootout, Madden made his winning move by ducking inside of McDowell on the 33rd lap.

“We had a good race with Dale there for a while,” Madden said, “and he left the door open enough on the bottom heading into turn one and I was able to get the lead.”

“I can’t get that third one out of my mind,” said Madden, who lost a possible win in the 2012 Shootout to mechanical trouble. “We let that third one get away coming off of four there. We broke a center out of a wheel or it would’ve been three in a row … that would’ve really been awesome.”

McDowell, 48, fell short of his third career Dixie Shootout victory. Bloomquist’s departure had given him hope, but his Team Dillon Warrior Race Car wasn’t quite strong enough to outrun Madden.

“I thought it was gonna be my day … I thought I was getting a gift,” McDowell said of his mindset after he inherited the lead from Bloomquist. “But we got looser as the night went on. We’ve been struggling just a little bit in these conditions on hard tires, so we threw some stuff at the car tonight and made some gains but just got a little bit loose there.

“I think we missed it just a little bit, and as good as these guys cars … Chris had the best car. I may have held him off on open racetrack, but I wasn’t maneuverable in traffic like I needed to be.”

The 50-year-old O’Neal, meanwhile, recorded a podium finish that could prove critical in his bid for a first-ever Lucas Oil Series championship. Recovering from a disappointing qualifying effort that left him ninth on the starting grid, the driver of the Clint Bowyer Racing Barry Wright machine surged from sixth to third on a lap-33 restart and stayed there to the finish.

Among the drivers O’Neal passed on that key restart was Owens, who got together momentarily off turn four with Lucas Oil Series rookie Jason Papich of Arroyo Grande, Calif., and slipped high, opening the door for O’Neal to charge underneath down the homestretch.

“We got a break tonight,” said O’Neal. “I don’t know how I slipped by those cars. They were wrecking everywhere. I seen ‘em bunch up there and just lucky I wasn’t caught up in it.

Notes: Madden was triumphant for the eighth time overall this season, but it was his first $10,000-plus win since mid-March. He scored four five-figure checkered flags during the season’s first six weeks, including a Feb. 7 Lucas Oil Series win at Golden Isles Speedway in Brunswick, Ga. … Papich ran as high as fourth before settling for a career-best Lucas Oil Series finish of sixth. With two events remaining on the ’14 schedule — Oct. 5 at Rome (Ga.) Speedway and Oct. 17-18 at Portsmouth (Ohio) Raceway Park — he trails Jason Hughes of Watts, Okla., by just 80 points in the battle for the circuit’s Rookie of the Year honors. ... Clint Smith of Senoia, Ga., piloted one of fellow Georgian Shane Clanton’s backup cars to a 20th-place finish. ... Billy Ogle Jr. of Knoxville, Tenn., steered a Stacy Boles-owned Rocket Chassis after his recent departure from Blount Motorsports but failed to qualify.