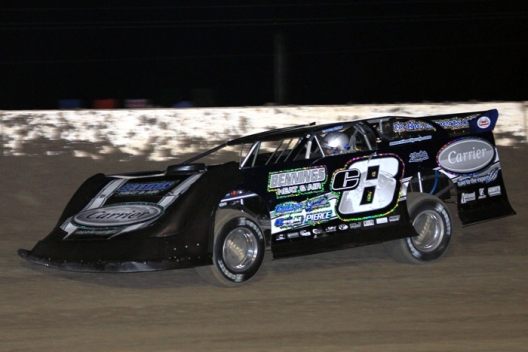 GREENVILLE, Miss. (Oct. 4) — Timothy Culp of West Monroe, La., didn’t merely score the richest victory of his young career in Saturday night’s eighth annual Gumbo Nationals at Greenville Speedway. It just might have been the most hard-fought race he’s captured as well.

Culp, 24, led from lap 48 to the finish, but he swapped the top spot six times with McCool before that and had to withstand a furious late-race bid from Baggett to reach the checkered flag first at a track that holds a special place in his heart.

“I won my first-ever Super Late Model race here in 2011,” said Culp, whose milestone victory came in a P&W Sales Southern United Professional Racing Series event on May 7, 2011. “This place has always been good to me. I’ve always had a fast car (at Greenville), I’ve just had to break in this race and other races.

“I lost a race to Bub McCool earlier this year here (also), so yeah, it’s awesome to win here — especially (for) 10-grand. It’s the biggest race I ever won.”

Culp spent more than half the race’s distance locked in a tight battle for the lead with the 37-year-old McCool, who was gunning for his fourth straight and fifth overall Gumbo Nationals win. They continually traded slide-jobs, with Culp leading laps 1-7, 18-20 and 30-40 and McCool pacing laps 8-17, 21-29 and 41-47 before Culp finally took over for good on a restart.

McCool kept his machine, which sported a special Halloween-themed wrap, hot on the rear bumper of Culp’s Bob Pierce Race Car until slowing to bring out a caution flag on lap 59. A broken j-bar and driveshaft doomed McCool, apparently the result of his hop over the turn-four cushion on lap 54 as he chased Culp.

“I’m tickled to get it … and I’m just happy to beat Bub McCool finally at Greenville Speedway,” Culp said while wearing a big smile after the race. “I had a little more straight-line traction than him, but he could get through the cushion a little bit better than me.

“I knew if I could just keep getting him on them restarts (each time Culp passed McCool for the lead was on a restart) I could kind of get in his head a little bit, and if I could ever catch lapped traffic in the lead I figured we’d have it. It just played into my hand there.”

Culp never had an opportunity to rest, however, even after McCool’s departure.

“It was pretty tough out there,” Culp said. “The track was real demanding.”

Baggett, 30, kept Culp honest right to the finish. He came on late in the distance, reaching second place and catching Culp but falling 0.463 of a second short at the finish.

“I almost got a little bit too lazy there (thought),” he continued. “I slipped back to fourth, fifth, sixth … we had a caution with about 15 or 16 (laps) to go and I knew it was time to go then. I feel like we got on the wheel and went forward, and I feel like a lap or two we was there.

“But Timmy drove a good race. He knew the top was where you to be and he got the win, so we’ll take second place tonight.”

Chad Thrash of Meridian, Miss., made a steady advance from the 14th starting spot to finish third. He climbed as high as the runner-up spot but couldn’t hold it.

“I hate racing like that (because) there’s no way you can really pass on stuff like that other than doing slide jobs and I hate doing that,” Thrash said, “but we was able to be patient there for a while and come on up through. I really felt like I should’ve run second, but I overcharged the corner on that last restart and Neil got by me.”

Thrash noted that he spent much of the race as a fan behind the wheel while watching Culp and McCool battle for the lead.

“(Culp) and Bub were putting on a heck of a race while I was running third,” Thrash said. “I was laughing at ‘em, just slide-jobbing each other back and forth. I was like, ‘Man, I’ve got the best seat in the house.’”

Thrash also had a perfect view of McCool’s losing run-in with the track’s ample cushion on lap 54.

“That cushion in four right there was so huge,” Thrash said of McCool. “He hit it, and when he hit it the whole car picked up. I guess it broke his j-bar because the rearend was out from under the car and they said his driveshaft come out.

“But’s very good at this place on this type of stuff, so for me to be able to stay on the same straightaway with him and Culp for a little bit felt pretty good.”

Tyler Erb of Magnolia, Texas, finished fourth and World of Outlaws Late Model Series regular Morgan Bagley of Tyler, Texas, was fifth at the checkered flag. Kyle Beard of Trumann, Ark., came from 22nd starting spot to place sixth after contending for a podium placing late in the distance.

Notes: Culp’s previous wins this season came in the Pelican 100 on March 14 at ArkLaTex Speedway in Vivian, La., and a Comp Cams Super Dirt Series event on April 12 at Northeast Arkansas Speedway in Harrisburg, Ark. … The feature was slowed by nine cautions. ... Only 12 drivers completed all 75 laps. ... Drivers joining McCool as early retirees included Ronnie Johnson, Brian Rickman, Jon Mitchell and Ray Moore. ... Time trials and heat races were completed Friday. ... Tommy Surrett and Trey Beene were involved in a hard crash in the sixth heat; Beene indicated that he might've suffered a broken hand. ... Several tributes and bonuses honored Greg Camponovo, the father of driver Ross Camponovo who was killed last week in a farming accident. … After a heat-race accident Friday required him to take a provisional to start the race, David Breazeale of Four Corners, Miss., salvaged a ninth-place finish and unofficially clinched his third career MSCCS championship.