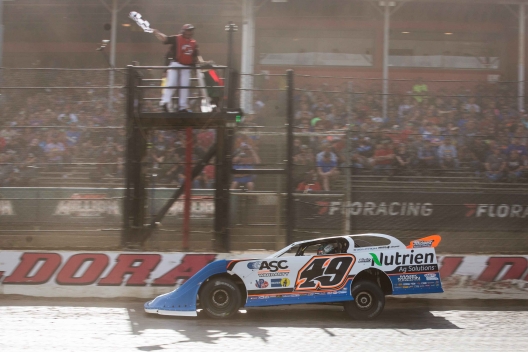 ROSSBURG, Ohio — Jonathan Davenport wasn't interested in an overly enthusiastic victory lane celebration Thursday afternoon at Eldora Speedway. He was glad to collect a $12,000 victory in a 25-lapper before the evening's Eldora Million, but his focus is on the seven-figure payday that's just hours away.

The 38-year-old Blairsville, Ga., driver who was already a favorite heading into the Eldora Million cemented that status in the prelims that were postponed by Wednesday rain as he slipped past Gregg Satterlee on a lap-eight restart and led the rest of the way.

Indiana, Pa.'s Satterlee, who started outside the front row and led the first seven laps, held onto the second spot until slowing with two laps to go, then falling from contention with a shredded tire as Ricky Thornton Jr. of Chandler, Ariz., overcame problems in time trials to finish second, 3.193 seconds behind Davenport.

With pole-starting Josh Rice of Verona, Ky., fading quickly, Satterlee took command at the outset and had a comfortable lead until the race's lone caution appeared on the seventh lap for a slowing Ryan Gustin, who pulled to the infield.

On the restart Davenport went around Satterlee and set sail, never challenged the rest of the way in driving the car his Double L Motorsports team saves for Eldora events.

"We've been rolling pretty good here this last couple of months and (I'm) just trying to do my job there," Davenport said. "I didn't want to get too close to the outside wall, but I felt like when I moved up through (turns) one and two, that helped me a little bit, just get a little bit more momentum going.

"I got a good restart there on Satterlee. He picked the right lane — I'd have picked the bottom, too — I just rolled just a little bit, just kept enough speed with him, and as he was picking up the pace, I was too. We just got a good start and didn't spin the tires getting into turn one."

Famously focused on major races at Eldora, where he's a four-time World 100 winner including last year, Davenport says he's "pretty calm" just hours ahead of just the second seven-figure payday in the history of the sport.

"Normally, this time of year, my wife and (crew chief) Jason (Durham) and everybody knows, I get pretty hectic and pretty much an asshole," he said. "But I don't know. I've seemed to have come to a peace with it and it is what it is, you know? If you don't win this race coming up, it really don't matter about the rest of it. So it's just all about winning. I've got the best piece I think I could have, got the best crew, I've got the best owner and best sponsors and I'm gonna try to do the best job I can to bring some big payday back home with us."

Thornton didn't have a chance of tracking down Davenport, but he was glad to end up on the podium after qualifying in the lower half of his qualifying group, a full second off quick time. In time trials he bent his car's right-front suspension, decking and quarterpanel among other things.

"I about killed our weekend there in qualifying. so I gotta give a big shoutout to my crew, and (Shane Clanton's crew) helped us get it back together for the heat race," Thornton said. "Congrats to J.D. He had a really good car, so we got a little bit we need to work (on), but should be good for here later."

Pierce tussled with his fellow Illinois racers and others and was glad he performed well in the prelims that began many hours earlier than he's used to racing.

"I'm not normally a morning person, so pretty glad with how we've run," he said. "I thought I was going to be a little tired this morning with how early we started, but all in all a great day and just see if we can keep it up. We got a lot lot to go so we're excited. We're motivated."

Notes: Davenport's victory was his sixth overall of the season. He earned $50,000 six days earlier in Lucas Oil Late Model Dirt Series competition at West Virginia Motor Speedway. ... In his previous starts at Eldora this season, Davenport finished second in Castrol FloRacing Night in America action and 14th in the Johnny Appleseed Classic in track conditions that were far rougher than Thursday's surface. ... After Davenport's victory, overall top preliminary points earner Mike Marlar of Winfield, Tenn., spun a zero on the inversion wheel, meaning Thursday night's heat races for the Eldora Million will start straight-up according to drivers' accrued points in the preliminary program. ... Davenport is scheduled to start on the pole of the fifth heat; a victory would give him a front-row starting spot in the 101-lap Eldora Million.

The first heat brought a major development when a jam-up off turn four between front-row starters John Henderson and Carson Ferguson created a chain-reaction that resulted in Group B fast-timer Spencer Hughes and Chris Simpson tangling on the homestretch and getting overrun by Brandon Overton. While Hughes and Simpson were eliminated, Overton, who started 11th after qualifying only 41st fastest, raced on to a sixth-place finish after pitting to make hasty repairs to the right-side damage on his Longhorn Chassis that he drove to two Dream victories and one World 100 triumph last year. … Hudson O’Neal, whose father Don led the first 25 laps of the 2001 Eldora Million, went on to capture the first heat. … Pre-race Million favorite Jonathan Davenport was dominant in winning the second heat on an afternoon surface that he was smooth and “super slick.” … Scott Bloomquist was scheduled to start 12th in the third heat but was required to drop three spots further back after he reported late to the racetrack. He managed only a 10th-place finish. … Gregg Satterlee, who won a preliminary feature during last year’s Dream and World 100 weekends, cruised to victory in the third heat by 2.494 seconds over 2001 Million A-main starter Darrell Lanigan. … Josh Rice, who memorably cooked an engine in a giant cloud of smoke during last year’s Dream activities, won the fourth heat. He indicated that he noticed the track surface beginning to take rubber around the bottom while outrunning Ricky Thornton Jr. by 1.801 seconds.

After heavy rain postponed Wednesday’s Eldora Million preliminary program to a Thursday morning start, teams are racing under partly skies with temperatures in the 70s. … The 124-car field assembled for the Million is just over half the 235 cars that were signed in for the original event in 2001, but it’s one of the largest turnouts for an Eldora crown jewel in more than 10 years. The last time the World 100 drew more entries was in 2010 (134 cars) while the Dream last exceeded today’s roster in 2007 (146 cars). What’s more, the last 100-plus crown jewel fields at Eldora came in 2018 (World 100 with 104 cars) and 2010 (Dream with 104 cars). … The hefty field has Eldora’s overflow upper pit area teeming with haulers. With the track’s helicopter pad surrounded by rigs, the chopper landing and taking off certainly is noticeable. “Stuff (in pit stalls) flies everywhere,” joked upstate New Yorker Dale "Scratch" Munn, a longtime supporter of Watertown, N.Y.’s Tim McCreadie. … Scott Bloomquist of Mooresburg, Tenn., the most prolific crown jewel winner in Eldora history and fast-timer and third-place finisher in 2001’s Million, wasn’t yet at the track when Wednesday’s postponement was announced. He arrived shortly thereafter in order to register, draw his qualifying pill and have his car inspected as mandated by officials. … Bloomquist is fielding a second car for open-wheel modified ace Zane DeVilbliss of Farmington, N.M., who has had Bloomquist drive one of his modifieds in special events. … Chub Frank of Bear Lake, Pa., who was the second fastest qualifier in 2001’s Million and finished 24th in the feature, is making his first Eldora crown jewel start in several years. He’s filling in as his cousin Boom Briggs’s teammate with Josh Richards of Shinnston, W.Va., sidelined by the shattered nose he suffered May 29 when a mud clod smashed into his helmet during Eldora’s Johnny Appleseed Classic, but Frank has opted to run his own No. 1* rather than one of Richards’s cars. … The Barry Wright Race Cars house car — fielded by All-Star Concrete’s Benji Cranford — is back in action with modified star Nick Hoffman of Mooresville, N.C., behind the wheel. … Hall of Famer Billy Moyer of Batesville, Ark., is continuing his recent return from semi-retirement by entering the weekend’s action as a teammate to Illinois veteran Tim Lance. Moyer, who has made four starts for Lance over the past two weeks, has his familiar No. 21 on his machine this week. … World of Outlaws Sprint Car star Donny Schatz of Fargo, N.D., is making his first attempt at a Dirt Late Model crown jewel at Eldora. … Bobby Pierce of Oakwood, Ill., has his car sporting a wrap design resembling a machine the fictitious Ricky Bobby drove in the movie Talladega Nights. His crew also is wearing T-shirts resembling those won by Bobby’s team in the comedy flick.