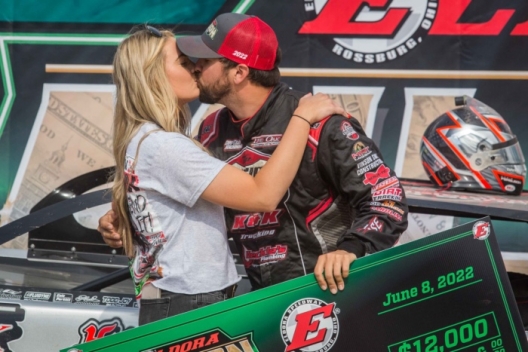 ROSSBURG, Ohio — On a historic day of racing with plenty of dramatics expected, Chris Ferguson made sure there wasn't any drama in Thursday afternoon's opening Eldora Million prelim.

The Mount Holly, N.C., driver cruised to victory from his pole position at Eldora Speedway, dominating all 25 laps and deftly handling lapped traffic en route to a $12,000 payday that should put him in solid position to contend for Thursday evening's $1,002,022 payday, the richest Dirt Late Model purse in history.

"This is that moment, you know, this is where you win at the biggest track there is in the world," Ferguson said in victory lane. "We might might not be the best every week but right now we're standing up here and just I can't believe it. This year has been awesome."

In a caution-free affair, Ferguson took command early and raced to his second straight victory, following his $50,000 Show-Me 100 triumph on May 28 at Lucas Oil Speedway in Wheatland, Mo.

"I'm so freaking happy," Ferguson said in victory lane. "My dad, my brother, Tadpole, all the crew guys, my girlfriend, my mom, the whole family. A lot of people put a lot into this program and I'm just a lucky guy, the guy to drive today. I'm just blessed. God's great and it feels good to finally get one here."

Dusty conditions made it difficult for some drivers to see signals from crew members, but Ferguson's brother,  Brandon Conard, was able to let Ferguson know he had a comfortable margin over Madden.

"I struggled a little bit in (traffic) — we were just a little free in dirty air — but I this is just amazing. Thanks to all my sponsors, man. I'm just so happy to be here and looking forward to racing for a million dollars later on."

Does he think he can come back a few hours later for a seven-figure paycheck? "We have a shot at it," Ferguson said. "We just gotta go out there and race a clean race and be there at the end."

The daytime track surface that was super-slick during heat and consolation races got a little work before the 25-lapper, but Madden elected not to make changes on his Rocket Chassis.

Madden struggled seeing in the dusty conditions, but "got a good start and got to second there behind Chris. Chris, you know, he's got a really good car right now. They've definitely picked up their pace and congratulations to him and his guys.

"But we had a great race car. We didn't do what I thought we needed to do, I didn't do it (with suspension changes). I told my guys, I said, 'We'll just go like we are and see where we're at.' We missed our balance just a little bit, but we'll be great in the Million tonight."

Maddne is looking forward to battling with Ferguson and others in the 101-lap main event.

"I love this place," Madden said. "It's my favorite place to race at. You know, what a way to to bounce back from all the ifs and should-haves and all that you know to win this Million here."

Notes: Ferguson notched his third overall victory of 2022; his other two wins paid $50,000 at the Show-Me 100 and in XR Super Series action at a dirt-covered Bristol (Tenn.) Motor Speedway. ... Seventeen of 24 starters completed 25 laps. ... The only two dropouts: Hall of Famer Billy Moyer, who pulled to the infield after 16 laps, and Ross Robinson, who parked after eight laps.

Overall fast-timer Mike Marlar flexed his muscle in the first heat, advancing from the fourth starting spot to emerge victorious. … Eldora Million pre-race favorite Dale McDowell saw his weekend get off to a rough start in the first heat when rear-end failure — perhaps the result of a blow to the back of his car from an unknown pursuer — caused him to limp into the pits while running fourth with one lap remaining. … Carolina drivers Chris Madden and Chris Ferguson — two drivers who enter the Million carrying plenty of momentum from recent rich triumphs — both raced to convincing heat wins. Ferguson unofficially earned the pole position for the preliminary feature. … Ross Bailes’s Billy Hicks-owned car was left with right-rear bodywork damage after a scrape with Kyle Hammer while battling for third sent him spinning into the backstretch’s inside wall on the first lap of the fourth heat. … Seeking his family’s first Eldora checkered flag since his father Donnie won the inaugural Eldora Million in 2001, Devin Moran ran away with the fourth heat. The 27-year-old crossed the finish line ahead of Daulton Wilson, who grabbed second on a late restart from 64-year-old Billy Moyer, one of 14 drivers in today’s field who competed in the 2001 Million.

After heavy rain postponed Wednesday’s Eldora Million preliminary program to a Thursday morning start, teams are racing under partly skies with temperatures in the 70s. … The 124-car field assembled for the Million is just over half the 235 cars that were signed in for the original event in 2001, but it’s one of the largest turnouts for an Eldora crown jewel in more than 10 years. The last time the World 100 drew more entries was in 2010 (134 cars) while the Dream last exceeded today’s roster in 2007 (146 cars). What’s more, the last 100-plus crown jewel fields at Eldora came in 2018 (World 100 with 104 cars) and 2010 (Dream with 104 cars). … The hefty field has Eldora’s overflow upper pit area teeming with haulers. With the track’s helicopter pad surrounded by rigs, the chopper landing and taking off certainly is noticeable. “Stuff (in pit stalls) flies everywhere,” joked upstate New Yorker Dale "Scratch" Munn, a longtime supporter of Watertown, N.Y.’s Tim McCreadie. … Scott Bloomquist of Mooresburg, Tenn., the most prolific crown jewel winner in Eldora history and fast-timer and third-place finisher in 2001’s Million, wasn’t yet at the track when Wednesday’s postponement was announced. He arrived shortly thereafter in order to register, draw his qualifying pill and have his car inspected as mandated by officials. … Bloomquist is fielding a second car for open-wheel modified ace Zane DeVilbliss of Farmington, N.M., who has had Bloomquist drive one of his modifieds in special events. … Chub Frank of Bear Lake, Pa., who was the second fastest qualifier in 2001’s Million and finished 24th in the feature, is making his first Eldora crown jewel start in several years. He’s filling in as his cousin Boom Briggs’s teammate with Josh Richards of Shinnston, W.Va., sidelined by the shattered nose he suffered May 29 when a mud clod smashed into his helmet during Eldora’s Johnny Appleseed Classic, but Frank has opted to run his own No. 1* rather than one of Richards’s cars. … The Barry Wright Race Cars house car — fielded by All-Star Concrete’s Benji Cranford — is back in action with modified star Nick Hoffman of Mooresville, N.C., behind the wheel. … Hall of Famer Billy Moyer of Batesville, Ark., is continuing his recent return from semi-retirement by entering the weekend’s action as a teammate to Illinois veteran Tim Lance. Moyer, who has made four starts for Lance over the past two weeks, has his familiar No. 21 on his machine this week. … World of Outlaws Sprint Car star Donny Schatz of Fargo, N.D., is making his first attempt at a Dirt Late Model crown jewel at Eldora. … Bobby Pierce of Oakwood, Ill., has his car sporting a wrap design resembling a machine the fictitious Ricky Bobby drove in the movie Talladega Nights. His crew also is wearing T-shirts resembling those won by Bobby’s team in the comedy flick.