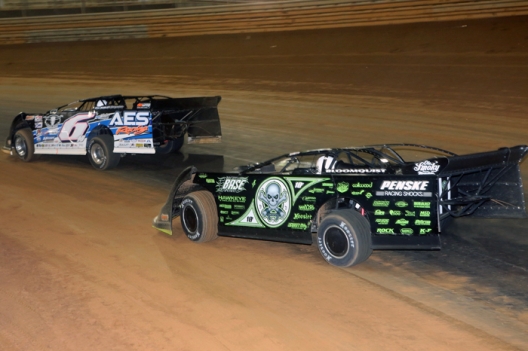 JAMAICA, Va. (April 12) – Jonathan Davenport proved something to himself on Saturday night at Virginia Motor Speedway.

After turning back a pair of Dirt Late Model legends — first Billy Moyer, then Scott Bloomquist — to capture the National Dirt Racing League-sanctioned Aaron’s King of the Commonwealth event, the 30-year-old driver from Blairsville, Ga., made it clear that he’s ready for prime time.

“I ran the Lucas (Oil Late Model Dirt) Series all year a couple years ago and never did get a win and never did set fast time,” said Davenport, whose single season with NASCAR star Clint Bowyer’s team ended after he completed the 2012 Lucas Oil schedule. “That was disappointing, but I just knew that with the right surroundings, the right crew chief around me, I could come out here on a national level and get it done like we did tonight.”

Davenport has seemingly found that comfort zone this season with his return to the venerable K&L Rumley operation. He’s already driven the team’s Longhorn Chassis car to six wins in 13 starts — none bigger than Saturday’s 60-lap A-Main, which was worth $20,000 and represented his first-ever triumph on the fledgling NDRL tour.

“I don’t know if it’s my biggest win ever, but it’s definitely big for my career and the Rumleys,” said Davenport, who ranked his 2011 victories in the Cotton Pickin’ 100 and National 100 at the top of his career list. “The Rumleys always run good here, so I definitely had big shoes to fill tonight. And getting my first NDRL win and closing in on that points lead is a big deal for us.”

Davenport never relinquished the lead after gaining control on lap 17 from race-long pacesetter Billy Moyer Jr. of Batesville, Ark., but he didn’t cruise to the checkered flag. The elder Moyer, also of Batesville, Ark., passed his son for second place on lap 21 and threatened Davenport throughout the race’s middle stages, and Mooresburg, Tenn.’s Bloomquist pressured Davenport during the final circuits after overtaking Billy Moyer for second on a lap-46 restart that followed the event’s lone caution flag.

Bloomquist settled for runner-up money in his self-designed car, crossing the finish line 0.476 of a second behind Davenport. Billy Moyer held on to finish third in his Moyer Xtreme by Longhorn machine, Don O’Neal of Martinsville, Ind., advanced from the seventh starting spot to place fourth in the Clint Bowyer Racing Barry Wright Race Car and Gregg Satterlee of Indiana, Pa., completed the top five in his Rocket mount.

Moyer Jr. slipped to sixth at the finish after starting from the pole position and leading laps 1-16. Chris Madden of Gray Court, S.C., who entered the evening leading the NDRL points standings, finished seventh and left the half-mile oval tied with Davenport for the top spot.

Davenport started fourth but immediately vaulted to second on the opening. He then patiently chased Moyer Jr. until diving to the inside of the track to grab the lead on lap 17.

“We’re (Longhorn) teammates so I knew what tires he was on,” Davenport said of Moyer Jr. “He was a little bit softer right-rear than I was, and I knew when we caught that lapped traffic we’d start running through a little grit so I figured that was when I had to make my move. He tried to stay around the top and the other lapped cars were blowing grit up there, so I knew I could move to the bottom and hopefully get around him.”

After disposing of Moyer Jr., Davenport soon had to deal with the elder Moyer — and, perhaps even more importantly, slower traffic. At the halfway mark he was in position to lap Brian Birkhofer of Muscatine, Iowa, but decided that attempting a pass could cost him the race.

“I ran down Birkhofer and never could get by him,” said Davenport. “It’s like we all equaled out once the rubber came over there in (turns) one and two. I knew if I couldn’t pass him, those guys weren’t gonna be able to get by me unless I made a mistake.

“I just tried to manage my tire and hang on, not make a mistake.”

The caution flag on lap 46, for Bub McCool of Vicksburg, Miss., slowing with a broken driveshaft, was welcomed by Davenport.

“I’d say that probably helped us out,” said Davenport, who previously won at VMS in a 2010 Lucas Oil Series event. “They (Moyer and Bloomquist) could’ve gained up on me and tried to make a run on the outside if it stayed under green with those lapped cars.”

Moyer, 56, saw an opportunity in those slower machines ahead of Davenport when the caution flag flew.

“When we was in all them lapped cars I didn’t need that yellow,” said Moyer, who started third. “I maybe could’ve done something with (Davenport). In clear track he was clearly faster than us, but in the dirty air there when we were all kind of slicing and dicing around the lapped cars, I was searching around trying to get (Davenport) set up when he was behind Brian (Birkhofer), but it just never happened.”

Bloomquist, 50, used the caution flag to pass Moyer for second with a hard charge to the outside of the track on the restart. He closed up to Davenport’s rear bumper on lap 57 but needed help to complete his run forward from the eighth starting spot.

“It was gonna be difficult because I’d already tried the outside in (turns) three and four enough times – and I might gain a little bit out there, but you just couldn’t gain enough (to overtake Davenport),” said Bloomquist. “Once he decided to get right to the bottom and protect it, he would’ve had to really slip up. He’s raced in the south enough to know that sometimes you can slow down and protect the groove and not have any worries.

“The black (groove) started getting traction in it and just made it get narrower….and the black got clean enough that it actually was about ready for a harder tire. I’m not sure what he ran, but we used ours hard getting there. If we wouldn’t have had to use it so much to get there I think we could’ve kept the car straight and drove off.”

Notes: Bloomquist’s lap of 16.509 seconds in Group B time trials established a new track record, eclipsing Madden’s 2010 standard of 16.773 seconds. Group A fast-timer Davenport (17.745) also surpassed Madden’s old record…. John Blankenship of Williamson, Va., switched to a backup car for the B-Main and used a provisional to start the feature. He picked up 10 spots to finish 14th. ... Kent Robinson of Bloomington, Ind., also gained 10 spots in the A-Main, finishing 13th after using a provisional. He fell from third to fifth in the points standings. … Jason Covert of York, Haven, Pa., pulled off one of the memorable passes of the night when he cranked his car hard to the inside off turn four on the final lap of the first heat to nip J.T. Spence of Winchester, Va., for the last transfer spot (fourth place). … Earl Pearson Jr. of Jacksonville, Fla., was running just outside the top 10 when he pulled off the track on lap 57. … Non-qualifiers included Dan Stone of Thompson, Pa., Dale Hollidge of Mechanicsville, Md., Kenny Moreland of Waldord, Md., and Walker Arthur of Forest, Va.