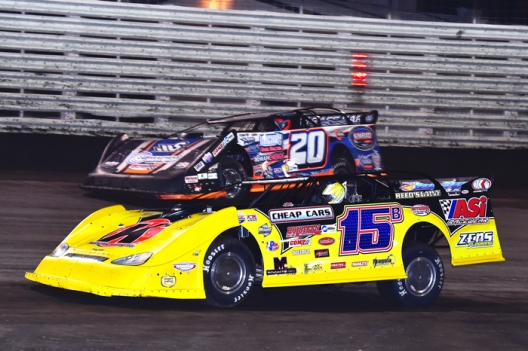 KNOXVILLE, Iowa (Sept. 26) — If the 11th annual Lucas Oil Knoxville Late Model Nationals ends up being Brian Birkhofer’s final weekend as a race car driver, he’s sure making the most of it.

On the heels of publicly revealing that he’s seriously considering walking away from the sport, the 42-year-old star from Muscatine, Iowa, thrilled his home-state fans with a triumphant performance in Friday night’s caution-free 25-lap preliminary feature at Knoxville Raceway.

Birkhofer moved forward from the fourth starting spot to pass race-long pacesetter Rodney Sanders of Happy, Texas, for the lead on lap 14 and roll on to a $7,000 victory. The champion of the inaugural Knoxville Late Model Nationals in 2004 kept fellow event winner Billy Moyer of Batesville, Ark., at bay over the final circuits to preserve his position at the front of the pack.

Birkhofer’s victory gave him the highest single-night points total for the two preliminary programs, putting him on the pole position for Saturday night’s 100-lap finale that boasts a $40,000 top prize. With the event potentially being his last competitive start, he’s well positioned to go out with a bang.

“Honestly, my gut tells me I’m gonna quit,” said Birkhofer, who announced on Thursday that he plans to sell his racing inventory and is contemplating whether he wants to take an early retirement from driving or accept a ride offer to compete for the Brian Rowland-owned team that currently employs Jason Hughes of Westville, Okla. “I can’t really explain what I’m feeling. I will say I promised pretty much everybody that (Saturday) they’ll know whether I’m gonna race or not. I’m gonna either commit to a group of people and race, or I’m gonna hang ‘er up.

“I just gotta figure it out (Saturday) — and if I decide to quit, I’ll try to get a good finish (Saturday) night and walk away doing something good I guess.”

Birkhofer stamped himself as a favorite for Nationals glory after steering his Vic Hill-powered Rocket machine past Sanders, an open-wheel modified specialist who has made just a half-dozen Dirt Late Model starts this season. Sanders, who turns 25 on Oct. 3, started from the outside pole and built a half-straightaway lead early in the race but by lap 10 had Birkhofer on his back bumper.

“He was getting tight and he ran over the cushion a couple times so I just said, ‘I’ll stay on the bottom’ and we got by him,” Birkhofer said of Sanders. “Then we got to lapped traffic and I couldn’t lap cars, and that really showed me exactly what my car was like. You get behind cars here, you’re going so fast, the dirty air starts really effecting you. You gotta have a really good, balanced car to make sure that you can steer here at the end of the straightaways.”

Birkhofer didn’t have a flawless vehicle, but it worked well enough for him to hang on the to lead when Moyer mounted a late bid.

“I think I found more on the gas pedal a couple times, on the cushion, to try to keep those guys behind me,” Birkhofer said.

Moyer drew close to Birkhofer in the final laps but refrained from attempting any desperate moves, preferring to take second place after experiencing a very short outing the previous night because a broken engine left him sidelined after time trials.

“We caught him (shortly after reaching second place),” Moyer said. “He was being careful with the lapped cars, I could see that — and I needed to do the same thing. Definitely the last five laps, with the night we had last night, I was trying to figure (event) points in my head a little bit to where I’m not completely buried for the big race. I just thought, I don’t need to do anything stupid.”

Birkhofer will lead the Knoxville Nationals field to the green flag, but he knows the speed he showed while winning on Friday won’t be sufficient to bag the big money.

“We gotta be better,” said Birkhofer, who finished third in Thursday night’s preliminary feature. “Honestly, I could probably run top five-ish (Saturday), but I don’t think I got a car to win right now.

“That’s the problem with this place, though — your car is gonna do three or four different things over a 100-lap race. I think last night I was too tight, tonight I was tight-loose in different ways … so I’ll get up (Saturday) and work on it a little bit in the morning, watch the (University of) Iowa game, and then come back and hopefully make the right decisions in hot laps and tune from there.

“If I can just stay in that top five, stay in the same straightaway as the leaders, I think we got a shot."

The call to line up the 25-lap feature was made at approximately 9:55 p.m. CT. … The A-Main’s front-row starters — Shannon Babb and Rodney Sanders — didn’t qualify for Thursday night’s headliner. … Lucas Oil Series points leaders Don O’Neal and Jimmy Owens missed the cut for the feature, which does not offer tour points. Only Saturday night’s 100-lapper is a points race. … Jimmy Mars grabbed the sixth and final transfer spot in the B-Main by a slight margin over Wendell Wallace.

Rodney Sanders was unbeatable in the final qualifier, marching forward from the fifth starting spot to score a convincing victory. Terry Phillips crossed the finish line second and Morgan Bagley — a Texan like Sanders — placed third.

In the most competitive prelim of the night, third-starter Jonathan Davenport wrestled the lead from Brady Smith on lap seven and marched on to victory. Brian Birkhofer also overtook Smith late in the distance and finished second, about 10 car lengths behind Davenport. Scott Bloomquist claimed third with a last-lap move on Smith that sent the Wisconsin high and shuffled him to fifth place. The race’s lone caution flag flew on lap three when Denny Eckrich slowed due to a broken driveline.

Frank Heckenast Jr. was flawless, rolling off the pole position to lead the entire distance. He beat Billy Moyer to the finish line by a half-straightaway to become the third Illinois driver to win a heat. Dale McDowell placed third from the eighth starting spot after Matt Furman relinquished the spot on the final lap.

Fifth-starter Steve Francis cruised to victory, outdistancing Jason Feger and Will Vaught. Jimmy Owens, who flipped in his heat on Thursday night, finished a quiet fifth in the non-stop race.

Brian Shirley became the second UMP DIRTcar Summernationals regular to win a heat as he bested A.J. Diemel by a couple car lengths. Earl Pearson Jr. was third at the checkered flag. Mason Zeigler was running fourth on lap 10 when he slowed to bring out the race’s only caution flag.

Brandon Sheppard proved his run from 22nd to fifth in Thursday night’s feature was no fluke as he romped to victory in the first qualifier over Shannon Babb. Mark Dotson started and finished third, taking the final transfer spot over Jimmy Mars. Fast-timer Darrell Lanigan missed the cut, finishing fifth.

Defending Knoxville Nationals champion Darrell Lanigan of Union, Ky., was quickest overall in Friday night’s split qualifying session, turning a lap of 17.865 seconds during Group 1. The accomplishment will give Lanigan the maximum qualifying points total but an eighth-place starting spot in his heat thanks to the 8-car invert.

Dale McDowell of Chickamauga, Ga., who was the overall fastest qualifier on Thursday night, was the fastest in Group 2 with a lap of 18.121 seconds. He will also start eighth in a heat race.

Friday night’s field numbers 74 cars. Drivers who are not entered after competing on Thursday night are Donny Schatz (off to run World of Outlaws Sprint Car races), Andy Eckrich, Curt Schroeder, Al Humphery and Junior Coover. … Hot laps began at 6:30 p.m. CT. … Joining Thursday-night feature winner Jonathan Davenport tonight is his team co-owner and crew chief Kevin Rumley, who flew in this afternoon after work commitments at home in North Carolina kept him from attending last night’s action. … Davenport has been asked one question quite often while at Knoxville: what’s up with the shiner on your left eye? His black eye was on full display to the cameras when he posed for pictures in victory lane last night. Davenport said it was the result of some, uh, rough-housing with “an old friend” last week. … Billy Moyer is ready for action after replacing the broken engine that sidelined him during time trials Thursday night.

Tonight’s racing card is identical to Thursday’s with a complete program of time trials, six heat races, D-main, C-main, B-main and 25-lap A-Main paying $7,000-to-win. Drivers accrue points based on performances each time they hit the track that will help set the lineup for Saturday's action.

Drivers will use their better points night — not combined points — to see where they stand for Saturday’s alphabet soup of features, which are topped by the 100-lap A-Man paying $40,000 to win. The top 24 drivers in the “best night” points rankings after Friday’s action will transfer directly to Saturday night’s headliner and start straight-up.

For full details of the weekend’s format, refer to our Fast Facts page.