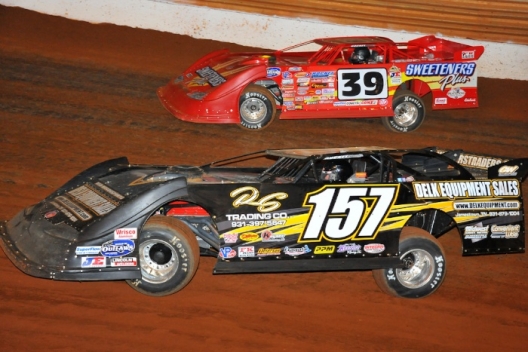 The Scion of Knoxville 50 made Marlar the tour’s seventh winner in seven series races as he held off Shane Clanton of Zebulon, Ga., and Rick Eckert of York, Pa., at the high-banked quarter-mile oval. Series points leader Darrell Lanigan of Union, Ky., and Eric Wells of Hazard, Ky., rounded out the top five.

"We actually scaled back on racing this year and I think we're going to have one of our best years yet,” said Marlar, who had a near mishap with the lapped car of Mark Gant. "My steering is bent, my arms are tired, but with all the help from my family and friends, Ronnie Delk (car owner), all of the work they put in, we're going stay in there and drive it all we can.”

McCreadie and Marlar brought the field of 24 to life for the start of the 50-lapper with McCreadie jumping to the high side and the early lead. Marlar tucked under T-Mac for second with Lanigan moving from his eighth spot to the fifth position by the second circuit. By the sixth lap, sixth-starting Clanton and his Capital Race Cars entry passed Eckert for the third spot.

"We're good, just need a little lady luck to start up front and maybe we can win one," said runner-up Clanton of Zebulon, Ga.

Eckert of York, Pa., held on to a third place-finish and said tire choice was the key.

"He was a little bit softer on the left rear tire, that one restart he took the bottom off two and snuck by me and I just couldn't get him back cleared,” the third-place finisher said.

Jack Sullivan slowed in turn three for a flat tire on lap 31 to bring out the next yellow flag. The lap-39 caution flag would be for Chub Frank's right-rear flat. Jeff Wolfenbarger would slow for the final yellow with two laps to go with a flat tire.

Notes: Marlar also won Thursday's Old Man's Garage Spring Nationals event at Tri-County Racetrack in Brasstown, N.C., picking up $4,000. ... Chase Junghans of Manhattan, Kan., was the highest-finishing rookie contender in seventh. ... All 24 entrants started the feature which was slowed by eight cautions and took just over 34 minutes to complete. ... Clint Smith of Senoia, Ga., switched to his back-up car after experiencing engine issues in his primary No. 44. ... Friday's WoO event at Duck River Raceway Park in Wheel, Tenn., was rained out and rescheduled for May 18.