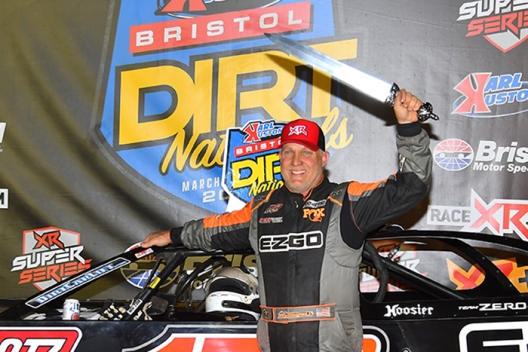 But the 55-year-old Chickamauga, Ga., driver, the first-ever Dirt Late Model winner at Bristol, proved a gray-headed veteran can still get it done at the high-speed track that's typically home to NASCAR's best.

"This was for the old guys. And we still got hope, we've still got it," a jubilant McDowell said after leading the final 21 laps Saturday for a $50,000 payday in the miniseries finale. "You know, these young guys make it tough, but it's awesome. It's awesome to be back here, you know, 22 years later."

After overtaking race-long leader Ricky Weiss on the 30th lap, McDowell cruised the rest of the way to his richest victory in eight seasons as he took the checkers 3.707 seconds ahead of miniseries champion Chris Madden of Gray Court, S.C., a two-time miniseries winner who collected $100,000 for his single-track title.

McDowell charged from his ninth starting spot and Madden rallied from 12th for the top two podium spots while Chris Ferguson of Mount Holly, N.C., was third in a race where half the 24-car field completed 50 laps. Scott Bloomquist of Mooresburg, Tenn., improved nine positions to finish fourth and 17th-starting Jimmy Owens of Newport, Tenn., rounded out the top five finishers.

Weiss, the Headingley, Manitoba, driver who was in position to capture the miniseries title over Madden while leading the first 29 laps, slipped back and fell from contention with a flat left-rear tire on the 36th lap. He finished 10th.

McDowell's lucrative victory was his third of a comeback season after missing the end of 2021 because of prostate cancer surgery. He won his last start of 2021 and his first start of 2022 as the National Dirt Late Model Hall of Famer has barely missed a beat with one of the best starts to the season in his career.

"Oh man, it's an unbelievable," McDowell said. "We've had a really good year. I can't thank the guys for working as hard as I did on this E-Z-Go hot rod. It made my job easier tonight."

While McDowell started ninth, he broke into the top five on the first lap, moved into third on the third lap and was up to second behind a cruising Weiss after nine circuits. He caught Weiss before the halfway point, then dove under the leader entering turn three on the 30th lap and never looked back.

McDowell, who had posted finishes of second, seventh and seventh in the first three XR Super Series events, had to scramble before the finale.

"Tonight we got in a mad rush and Chris Ferguson's crew jumped in and we changed a rack-and-pinion (steering) while the B-main was going on, so thanks to Brian and all of Chris's guys," McDowell said. "Just very appreciative of everybody on this car, all the race fans, the good Lord above. If it wasn't for him, I wouldn't be through the cancer deal and through all the process and be able to do this today. So the most important part is to thank him for letting this all be possible, and all of us be here and enjoy what we love."

McDowell struggled to explain how quickly the Shane McDowell Racing program rebounded from his health-caused hiatus.

"You know, we started out in Florida, just completely unexpected how good we was out of the box," McDowell said. "And you know, it says (a lot about) my brother (Shane). My little brother works his ass off and he made sure everything's good and worked while we were down for a little bit. I asked him, when I got sick, I asked him, I told him to put somebody (else in the car) for three or four months, and you know, he wouldn't do it. He just worked on stuff, and so very thankful, very grateful to be here."

Madden's apparent victory in the fourth heat race put him in an ideal position to hold onto his miniseries points lead in the finale, but he was docked two positions after the prelim when his car's deck height didn't meet specifications. The South Carolinian was glad he "had a car to get another win" but clearly frustrated that he had to rally from the sixth row to get into contention.

"It says a lot for my team and who we are and what we do." he said, adding that "we had a couple of restarts that went our way out there and that was definitely big for us. But, you know, our car was good enough to put us in the position when (the restarts) happened to be able to pick those spots up. Hat's off again to my guys for not giving up on me, and I never give up on them. It's just great for our team and says a lot for us and my sponsors and all my family and friends that support me."

Ferguson, who started seventh, saw McDowell's early prowess and knew he was going to be difficult to beat.

"We went from having a shot, I think, to win the race to completely having to scrap just to get back to third, and I really didn't think I was gonna get third if it wasn't for Ricky having a flat and then (Kyle) Strickler (broke). We probably wouldn't have gotten there," Ferguson said. "But yeah, just dirty air and clean air, it's a whole different factor here. And it showed. Dale was out front checked out, and I could run to Chris, but once I realized I wasn't gonna pass him I just started riding the last five laps."

Four cautions slowed the action, the first on the third lap when Brandon Overton appeared to lose power and three more yellows appeared between laps 32-38.

Notes: McDowell's previous richest victory came with a $100,000 payday in Eldora Speedway's Dream in 2014. ... McDowell struggled a bit in reeling off the Shane McDowell Racing sponsors. "I know I'm forgetting people," he said in victory lane. "I need to practice this stuff more." ... Jonathan Davenport retired his smoking machine during the lap-33 caution. ... A broken fuel pedal forced NASCAR Cup champion Kyle Larson out in the early laps. ... Ashton Winger just missed out on earning a fast-time provisional starting spot. Making his first Bristol appearance this week alongside his driver Earl Pearson Jr., Californian Jason Papich, who was 5/100ths of a second faster in time trials, got the spot and started on the tail. ... Mike Marlar of Winfield, Tenn., was leading the fourth heat when he smashed the wall in turns three and four (near the same spot he crashed the previous night). His heavily damaged car was towed off between two wreckers, and he later received a fast time provisional to start the feature in his backup but was an early retiree. ... The XR Super Series returns to action April 22-23 at All-Tech Raceway in Ellisville, Fla., with $25,000- and $50,000-to-win events.