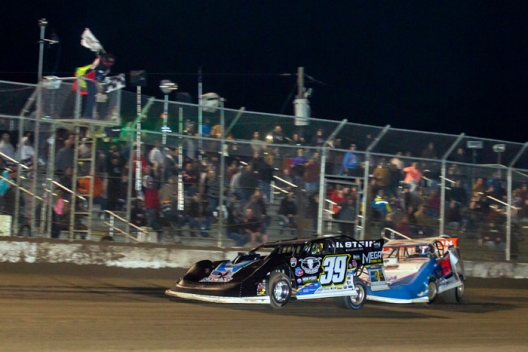 OCALA, Fla. (Jan. 31) — Devin Moran required nearly 40 complete laps Monday to wrestle the lead from Tim McCreadie at Bubba Raceway Park. It took him just a half-lap to lose it.

In a wild finish on the opening night of the K&N Filters Winternationals presented by Optima Batteries, the high-flying Moran and hub-hugging McCreadie came together with a bang exiting turn four on the final lap with McCreadie nipping Moran at the checkers by two-tenths of a second for a $10,000 Lucas Oil Late Model Dirt Series victory.

Dresden, Ohio’s Moran, 2022’s early points leader on the national tour, slid past the reigning series champion in turn two on the final circuit and extended his lead heading into turn three. But when Moran got too high in turn four with his car nearly getting sideways, Watertown, N.Y.’s McCreadie exited the corner underneath Moran and the Longhorn Chassis drivers found themselves fighting for the same real estate in a dramatic, contact-filled finish.

McCreadie, the right door of his Paylor Motorsports caved in, ended up atop the podium while Moran settled for second, his car skittering into the infield after the checkers.

Polesitter Brandon Sheppard of New Berlin, Ill., fell back on an early restart and recovered to finish third in the Georgia-Florida Speedweeks event while Mark Whitener of Middleburg, Fla., was fourth for the hometown Big Frog Motorsports team. Ricky Thornton Jr. of Chandler, Ariz., a Lucas Oil winner last year at the track co-owned by Bubba Clem, rounded out the top five.

With the exception of outside-lane cars struggling to keep up on restarts, the race up front was mostly uneventful until the final lap as McCreadie, who started outside the front row, kept the fourth-starting Moran in check at the D-shaped track.

But when Moran started rolling on the high side in the final laps to close in on McCreadie, it set up a last lap that turned out to be a doozy.

McCreadie thought he’d be settling for second after Moran’s turn-two slide job carried him into the lead, but Moran’s turn-four miscue gave McCreadie an opening.

“I mean, out of (turn) four. I didn’t know he stopped by the wall,” McCreadie said. “I was trying not to clip the infield there and when I looked up he was there. It’s like, I lifted, but I couldn’t slow it down. What are you gonna do? I lifted (in turn two) because it might have been the same if I didn’t get out of the way over there. ... It’s the way it goes. We got a win.”

McCreadie chalked up the finish to “hard racing” in his victory lane interview, but he took exception to Moran’s turn-two move.

“That’s what they always tell me when it happens to me, it’s good hard racing,” the 47-year-old McCreadie said. “I don’t like racing like that, but also, at the end of the race, I was searching. I should’ve probably moved (grooves), and he did a helluva job moving around.

The 27-year-old Moran declared he “just freakin’ gave away another race” in settling for a third consecutive Lucas Oil runner-up finish after capturing Thursday’s tour opener at Golden Isles Speedway near Brunswick, Ga.

“I did what I could to get by Timmy. I knew they were telling him to move to the top and he was going (high) in the wrong end,” Moran said. “So I took advantage of it and then I just … I should’ve just hit the bottom on the last lap. I gave him the chance to blast me and he did — but he did we had to do to win.

“We’ll just fix everything up, and we got a really really fast Tye Twarog Racing Longhorn. So we’ll just straighten out the body and make sure nothing’s bent, and hopefully Bubba can provide a track like this again tomorrow night, because this is about the best you can do here, and that was pretty badass.”

Sheppard called the finish “pretty crazy” and felt like he should’ve been part of the battle, but he couldn’t quite overcome slipping to fifth from second on a lap-seven restart as he became one of many drivers fading after restarting in the outside lane.

“We took off pretty good there and I felt like we were maintaining with McCreadie in the bottom there pretty good,” Sheppard said. “And then the restart I just chose the wrong line and that was pretty much the end of my race. I had to fight really hard to get back up through there (he was scored as far back as sixth on laps 25-27).

“Luckily we were able to get back up through there a little bit and Bubba had the track really good tonight,” the Rocket Chassis house car driver added. “I just can’t say enough about my team. They gave me a fast car all night long, and you know, I made one bad decision picking my line on a restart and it put me out of contention there at the end of the race.”

The feature was slowed by six cautions, none for serious incidents but three of them over a three-lap stretch just past halfway.

A quick trio of cautions appeared for Brian Shirley’s turn-two spin (lap 23), a slowing Josh Richards (lap 25) and a stalled Max Blair (lap 26), whose car was towed away.

The sixth and final slowdown came with nine laps remaining when Daulton Wilson’s smoking car rolled to a stop in turn four.

After taking Sunday off, the Lucas Oil Late Model Dirt Series is at Bubba Raceway Park Park near Ocala, Fla., on Monday. Sunshine and temperatures in the low-70s greeted drivers and fans who made the 170-mile trip south, a welcome change from the blustery, 30-degree temps on the final night at Golden Isles. … With a soggy surface to start the evening (four-time series champ Earl Pearson Jr. was overheard joking that they “tried to rain it out” with the water truck) drivers were given two rounds of hot laps before time trials, which got underway around 7:15 p.m. …  Monday’s 46 entrants tied for second-most ever for a Lucas Oil Series-sanctioned Winter Nationals race at Bubba Raceway, joining the 46 cars on hand for the second night last season. The series record, 49, was set on Feb. 1, 2021, the opening night of the two-race stint. The most ever, 51, was accomplished twice in 2012 on back-to-back nights of World of Outlaws action. … Both of last year’s winners, Ricky Thornton Jr. of Chandler, Ariz., and Shane Clanton of Zebulon, Ga., are in attendance. Clanton’s victory last year ended a 16-month drought on the Lucas Oil Series. Asked what it would take to get back to victory lane here, Clanton replied, “A lot of luck. The right kind of luck.” … Both Cody Overton of Evans, Ga., and car owner Jeff Mathews of Apollo Beach, Fla., had engine trouble at Golden Isles. Mathews shifted to a backup car for Monday, while the team purchased an engine from Mike Marlar for Overton to use. They finished installing the powerplant Monday. … Six drivers — Todd Cooney, Joseph Joiner, Austin Kirkpatrick, Ryan Markham, Brenden Smith and Drake Troutman — are entering their first 2022 Georgia-Florida Speedweeks action. They are joined by five others — Max Blair, Tyler Clem, Tanner English, Deshawn Gingerich and Kyle Hammer — in entering their first Lucas Oil Series event of the season as well. … Brandon Overton of Evans, Ga., winner of the last two series races, is among drivers taking Monday off.