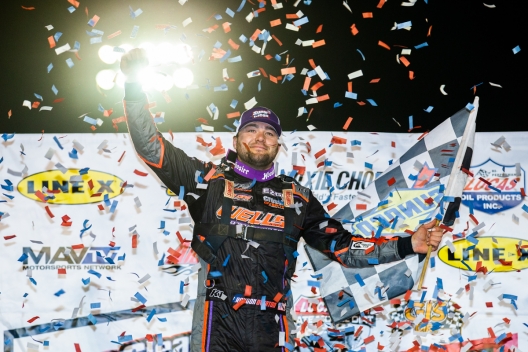 BRUNSWICK, Ga. (Jan. 28) — Brandon Overton made good on a promise to his boss on Friday night at Golden Isles Speedway.

After failing to qualify for the previous evening’s Super Clean Super Bowl of Racing presented by eBay Motors opener largely due to a post-qualifying penalty for a droop-rule infraction, the superstar from Evans, Ga., rebounded in a big way to capture Friday’s 50-lap feature at the 4/10-mile oval.

Commented Overton: “I told my car owner (David Wells) last night, I said, ‘Man, I’m sorry. I probably cost us that one. I’ll make it up to you tomorrow.’”

Overton, 30, erased memories of his Thursday frustration — his fleet qualifying time was wiped out because his car didn’t meet the proper deck height measurement (or “droop” rule) and he was unable to recover to transfer after starting at the rear of his heat — with a run to a $12,000 victory that bore plenty of resemblance to so many of his triumphs during his 2021 Driver of the Year campaign. He glided past race-long pacesetter Devin Moran of Dresden, Ohio, for the lead on lap 27 and kept Thursday’s opening-night winner at bay the remainder of the distance for his first checkered flag of the season.

With the A-main running caution-free from lap 12 to the finish, Overton maintained a short-but-steady edge over Moran throughout the race’s second half in his Longhorn Race Car. His final margin over over Moran was 0.622 of a second.

Hudson O’Neal of Martinsville, Ind., finished third after his outside charge rounding turns three and four on the final lap fell a mere 0.173 of a second short of Moran. Earl Pearson Jr. of Jacksonville, Fla., who also had his Thursday effort set back by a droop-rule penalty following time trials, placed fourth after running second for laps 13-21 and 13th-starter Tyler Bruening of Decorah, Iowa, completed the top five after reaching fifth on lap 44.

Overton accepted full blame for his disappointing Thursday outing, which saw him miss the feature field by one spot in a B-main.

“I have to thank the crew,” Overton said after his 11th career win on the Lucas Oil Series. “They bust their butts on this thing and I kind of screwed ‘em up yesterday. Nothing intentional … so much stuff changes, and I’m trying to get the car right and it just slipped my mind with the (new-for-2022 droop-rule) deal there. It is what it is …not like it mattered much.”

Indeed, Overton combined his impeccable patience with a speedy machine to emerge triumphant. He shot from the fourth starting spot to second at the initial green flag, ceded second to Pearson on a lap-12 restart and then regained the position on lap 22 before going underneath Moran down the backstretch to assume command on the 27th circuit.

“Devin’s one of my good buddies,” Overton said of Moran. “He’s a heck of a race car driver, and I didn’t really know what to do on that (lap-12) start, but I knew I didn’t need to abuse my stuff. So Earl took his shot at (Moran) and kind of chased him down for a little bit and I just got to sit there and wait on ‘em to start slipping. I just kept my cool and drove back by ‘em.”

Overton said he wish he “could’ve got to race last night” in the feature, but his quick return to the spotlight gave him confidence that “we’re just kind of carrying over” the team’s momentum from a 2022 season in which he earned nearly $1 million.

Moran, 27, had to settle for second after coming off the pole to lead the race’s first 26 laps in his Tye Twarog-owned Longhorn car.

“I just could not maneuver through lapped traffic,” Moran said. “I messed up, and Brandon just did what he always does. He’s just really good. I’m glad he didn’t race last night too I guess.”

Moran felt fortunate to hang on for a runner-up finish in the face of the late-charging O’Neal, who poured on the speed on the last circuit after reaching third on lap 32.

“Our tires were pretty much bald,” Moran said. “I think Huddy was a little bit harder than us on tires.”

The 21-year-old O’Neal noted that his bid in Roger Sellers’s XR1 Rocket car was “just a lap or two too late.”

“We just got behind there early,” O’Neal said. “We didn’t fire quite as good as we needed and I think that hampered us quite a bit. I think we fell back to seventh or eighth, so we had to kind of slowly work our way back up. Then the lapped traffic didn’t help any, but we have a great race car. We improved from last night so that’s the main thing.”

Just two caution flags slowed the event, both on lap 12. The first came when Mark Whitener spun while just outside the top 10 and on the restart Stormy Scott twirled in the second corner.

Notes: Overton’s eighth career Georgia-Florida Speedweeks victory gave him at least win during the early-season stretch of racing for the sixth consecutive year. He previous won a Super Bowl of Racing event at Golden Isles in 2017. … Pearson raced on the eve of his 50th birthday. … Twenty-three drivers were on the lead lap at the finish with two others (Garrett Alberson and Daulton Wilson) one lap down. … NASCAR Cup Series champion Kyle Larson was one of the two early retirees from the feature. He headed to the pits during the first lap-12 caution period after left-front nosepiece damage caused him to slip backwards from the 12th starting spot in the K&L Rumley No. 6.

For the second night in a row, track and series officials have shuffled the posted running order in an effort to avoid impending chilly weather. Lucas Oil Late Model Dirt Series teams will have a quick turnaround as they will qualify immediately following the 602 Late Model hot lap/qualifying. Following 604 hot lap/time trials and the night’s opening ceremonies, the Lucas Oil Series will run through its full program of heats, consolations and the 50-lap feature before the Crate Late Models return to complete their respective programs. … It was 52 degrees and cloudy with a slight wind when hot laps began. … With Saturday’s forecast calling for even colder weather, Crate Late Models will be on the track at 1 p.m. to start their program. The Lucas Oil Series drivers will hot lap at 4:30 p.m. and run through a complete program, while the Crate Late Models will run their respective features last. … Jimmy Owens of Newport, Tenn., is hoping for a better start after a rough night Thursday when the four-time series champion smacked the wall during practice, took a provisional to start the feature and raced from 23rd to 10th in the main event. “We just crashed. We’ve done it before,” said Owens with a wry smile. “I think we may have broke a ball joint. I’m not sure, but a ball joint was broke out of the casing. It could have been a product of (rough track conditions) at Volusia County, I don’t know.” … Don O’Neal of Matinsville, Ind., was roaming around the Golden Isles pit area chatting up friends when he wasn’t lending a hand to son Hudson O’Neal, but the 2014 series champion was no fish out of water. O’Neal insisted that Georgia-Florida Speedweeks did not bring about any racer’s itch since last driving full time in 2019. “Not at all. It might be a different story if (Hudson) wasn’t my fix.” … After a 23rd-place finish in Thursday’s opener, Kyle Strickler of Mooresville, N.C., hopes Friday will be better. “(Thursday) was my first time here in a Late Model. I hate wheelspin and it seems like this place you get a lot of wheelspin before you get going,” Strickler said. “We had the Fox (shock) guys over, so hopefully we’ll be a little better.” … A few drivers, including Stormy Scott and Ashton Winger brought cars back to the Lucas Oil Late Model Dirt Series trailer for additional measurements Friday afternoon. Las Cruces, N.M.’s Scott just wanted to double check the new droop rule. “We just wanted to get it checked again,” said Scott crewman Kyle Dailey. “They changed (the droop rule in December) to where both rear tires have to be off the ground. We just wanted to make sure it was (correct).” … Winger, of Hampton, Ga., had a new piece of artwork in his pit area Friday: hanging from the deck of his hauler was a flag with the painting of White Goodman — Ben Stiller’s character from the movie Dodgeball — wrestling a bull by the horns. “I like it,” said Winger with a smile. ... In anticipation of Saturday's cold snap, workers with the Jekyll Island Authority were busy covering plants and shrubbery on Friday afternoon so they wouldn't be damaged by frost and freezing temps overnight, a rarity indeed for southern Georgia.