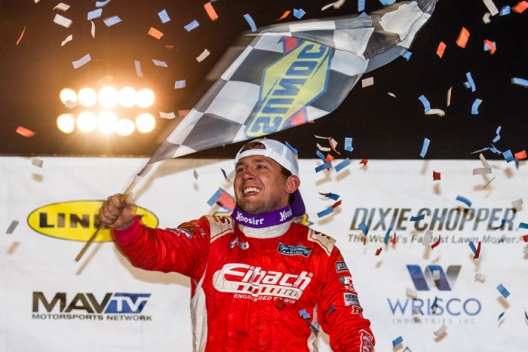 BRUNSWICK, Ga. — Four drivers grabbed the lead in Thursday's Lucas Oil Late Model Dirt Series opener at Golden Isles Speedway and tried to keep it. Three of them failed, but Devin Moran got the job done.

The 27-year-old driver from Dresden, Ohio, raced under Brandon Sheppard in turns three and four on the 18th lap and led the rest of the 40-lap feature in the first of three rounds of action at the Super Clean Super Bowl of Racing presented by eBay Motors. Moran collected $10,000 for his third career victory on the national tour, which ran the first of 14 scheduled Georgia-Florida Speedweeks events.

"I mean, this is just awesome," Moran said in victory lane after taking the checkers 1.371 seconds ahead of Sheppard at the 4/10-mile oval. "I was so nervous before the race because I felt like we were good in our heat and I just didn't know what changes to make. But (we've) just been working our butts off and trying to get faster and faster and it's awesome to be out here right now."

Moran was complimentary of the track surface at the track purchased by Lucas Oil Series regular Kyle Bronson and his fiancee Amber Lloyd just seven weeks ago.

"This is probably the best I've ever seen this racetrack," Moran said. "I might be a little biased, but it was awesome. And I'm so glad that they're doing this and they're putting their neck out on the line, so hopefully these fans come out the next few nights and support 'em."

Sheppard, the driver of the Rocket Chassis house car searching for his first Golden Isles victory, saw his lead disappear almost as quickly as he grabbed it from Erb.

"The middle stage of race there, I got rolling in the middle of racetrack and was able to get to the lead there," said Sheppard, who was racing on his 29th birthday. "And then I got to where I couldn't steer coming off the corner late in the race, so that kind of left door open for Devin to get underneath me there. And obviously his car was really good, so congratulations to him, and Kyle and Tyler and everybody on a great race. There's a lot of fun out there and hopefully we can keep this thing up front all weekend."

After leading seven laps and losing the point to Erb, Larson slipped back to fifth on a lap-nine restart but finally recovered.

"I felt really good early and then I just didn't do a great job there in traffic and Tyler got by me and then I just, I suck on taking off on restarts and get ate up every time," the driver of the K&L Rumley Enterprises entry said. "There was a point where I thought maybe I'd run like 13th, and then about 10 laps (to go), I was like 'I might still have a shot to win this thing.' So it was interesting how for 40 laps, there was kind of a lot of comers and goers.

"Overall I was pleased with my FloRacing car there. It was good. I think we definitely are close; (we) just got to get a little bit better. Devin was was really strong there. Brandon was really strong in the middle portion, so (we'll) just keep working and try and get a win."

Three cautions slowed the action at the 4/10-mile oval. The first appeared on the ninth lap when 18th-running Brian Shirley shredded a left-rear tire and the yellow flew for the second time on the 20th lap for a slowing Ryan Gustin. The final caution appeared on the 30th lap when Steven Roberts slowed.

The Lucas Oil Series returns to action Friday with a $12,000-to-win event in the second round of Super Clean Super Bowl of Racing action.

Notes: Moran has three career Georgia-Florida Speedweeks victories including a WoO triumph last season at Volusia. ... His first Speedweeks victory came in 2013 Lucas Oil Series action at East Bay Raceway Park in Gibsonton, Fla. ... Jimmy Owens got into the fence in time trials and wasn't on the track until the feature while making repairs to his car. He rallied from 23rd to finish 10th. ... With nearly 90 cars between two undercard divisions of Crate Late Models, officials shuffled the announced running order and ran straight through with the Lucas Oil program after time trials were complete for the three divisions.

Both Brandon Overton of Evans, Ga., and Earl Pearson Jr. of Jacksonville, Fla., had their times negated after their Longhorn cars failed to meet the proper deck height measurement (droop rule) following time trials. Both drivers received loud cheers from the crowd after completing their respective laps, Overton for setting what was the overall fast time at 14.838 seconds during the first group’s session and Pearson, the local standout and fan favorite (GIS is about an hour from Jacksonville) who was third overall in the second group. Both drivers will have to tag the tail of their respective heat.

Welcome to the sunny — but chilly — 2022 Georgia-Florida Speedweeks. The Lucas Oil Late Model Dirt Series kicks off its season on a cool Thursday night at Golden Isles near Brunswick, Ga. Drivers and fans looking to dodge old man Winter were somewhat successful. Temperatures hovered around 50 degrees when hot laps got underway with the overnight low dipping into the low 40s. Friday’s weather is expected to be similar, while Saturday’s high is predicted at 45 degrees. … Forty-seven drivers signed in for the first Lucas Oil Series event of the season. … Series director Rick Schwallie said technical inspection — the tour’s first since agreeing to a unified set of rules with a number of other series, including the World of Outlaws, back in December — went relatively smooth. “We’re the second series to do this now. A lot of the guys have already gone through it before, so it wasn’t a very big deal for most,” said Schwallie, adding that series tech director Steve Francis attended the WoO opener at Volusia last week. … Ashton Winger of Hampton, Ga., is among drivers who had to tweak a few things on his car’s body to pass tech. Winger had to cover three small holes in the filler panel and move the right rear quarterpanel in slightly. “More or less just some little stuff. It wasn’t that big of a deal, just a pain in the a--.” … Josh Richards’s Boom Briggs-backed Rocket needed an adjustment or two also. “We had to knock this down a little right here (pointing to the top of the fender), move our flopper in a little and move the (right side) door in a little,” said a crew member for the Shinnston, W.Va., driver. … After winning the Wild West Shootout championship in Vado, N.M., earlier this month, Mike Marlar of Winfield, Tenn., is piloting a Jason Rauen-owned car this weekend. “Unless we have a major problem, we’d like to do all the Lucas Oil Series (speedweeks) races. They wanted to race and we weren’t quite ready. We’re still gathering parts up,” said Marlar. … Dennis Erb Jr. of Carpentersville, Ill., is Thursday’s first qualifier, a prospect Erb isn’t too keen on. “Well, I’m not dead,” quipped herb crew chief Heather Lyne, who drew the spot for Erb. “He wasn’t very happy.” … After showing a lot of speed during the Wild West Shootout at his home track Vado (N.M.) Speedway Park, Garrett Alberson is taking in Golden Isles for the first time as a driver. “I came here with Earl (Pearson Jr.) with the Lucas stuff. There’s definitely a little bit of a learning curve because we don’t really have tracks like this, this shape and this driving style. Hopefully I can catch on pretty quick.” … Rumors of Texan Allen Murray’s exit from the sport (again) may have been premature. Murray is among the 47 drivers on hand Thursday. … After spending the last week worrying more about soft drinks and hot dog buns, new track owner Kyle Bronson of Brandon, Fla., looked more at home behind the wheel of his orange and white No. 40B. ... Ross Bailes of Clover, S.C., said he intended to compete in only the Georgia portion of Georgia-Florida Speedweeks (Golden Isles and Screven).