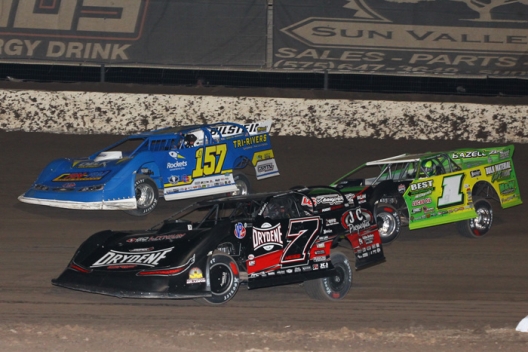 So after losing Wednesday's race to Alberson when Marlar tangled with Bobby Pierce on the final lap, Marlar wasn't interested in watching Alberson flash past again at Saturday's checkers. While Alberson closed in — drawing within 0.369 of a second at the line — Marlar held on for a caution-free, 40-lap victory worth $5,000 in the fifth round of the miniseries.

"It was really close," Marlar said in victory lane. "(Alberson) is a dang good driver. I was looking up on the (video) board and seen he was in there. It made me a little nervous because there at the end I was a little loose and he was coming. Good thing it wasn't a 50-lapper."

Marlar, the 2018 Wild West Shootout champion who regained the lead from fellow front-row starter Tyler Erb on the 12th lap, became the fourth 2022 miniseries winner with Alberson settling for second ahead of Earl Pearson Jr. of Jacksonville, Fla. Ricky Weiss of Headingley, Manitoba, was fourth and New Waverly, Texas driver Erb ended up fifth at the 3/8-mile oval.

At the outset, the third-starting Weiss nipped Marlar at the line to lead the opening lap, Marlar swept ahead on the outside and led until Erb's daring move amid traffic exiting turn two on the ninth lap. But Marlar stayed hot on Erb's heels and went back ahead on the 12th lap for a lead he'd never give up.

Marlar did have a few tense moments, including on the 19th lap when his car's nose was briefly hung up on the rear of the Terry Phillips entry, and again three laps later when Jeff Schildmeyer got sideways in front of the leader between turns three and four.

Alberson, who was in fifth with 12 laps remaining, charged late but Marlar had a big enough cushion to hold him off.

"I knew he was coming really good, but I have a good car. I've had a good car all week long," said Marlar, who has two career miniseries victories. "Just missed it a couple of times on setup and just, (Wednesday), I felt like I was in the wrong lane and Bobby (Pierce) and me had that (last-lap) crash. But anyway, yeah, it felt a little bit like it owed me one, you know. But I'm glad to get one. It'd be a good time to get on a roll here with 25-grand tomorrow (going to the winner).

Alberson, who started fourth but slipped back to eighth in Friday's main event, was glad to get back on track and post his third podium finish of the miniseries.

"It's good to get back going. Last night we had kind of a tough night, kind of underadjusted and let that track get in front of us there," he said. "So tonight we made some gutsy calls there at the end, right before we rolled out, and it seemed to pay off, you know. We felt like we were getting a little bit behind. All these other guys work so hard (to get faster), you can't rest. So we got back after it. Just really proud of my team. They put up with me making last-minute (changes) and they work their butts off, so this is for the team and this is for all the Las Cruces people that come out."

"We're tickled to death with that. That's 40 laps, as hard as you can run a damn race car right there. I'm sure the fans enjoyed that," Pearson said, adding thanks for fans watching him back home. "We're having a good time here out in New Mexico and hopefully we can something again tomorrow. You know, it's a 50-lap race tomorrow, so hopefully we can get it done. I wished it'd have been 50 laps tonight. It'd have been interesting."

Before the main event, the field paid tribute to Hall of Fame Chassis builder C.J. Rayburn, who died New Year's Day. The man who was previously a grand marshal of the Wild West Shootout was honored with Rusty Schlenk's Rayburn lookalike car out front as the 25-car field carried U.S. and other flags.

"I wanted to win one so bad for C.J.," Marlar said, his voice cracking in mentioning one of the biggest supporters of his career. "We missed his funeral and we got to win one for him ... he's been so good to all of us. It's cool to carry the flags and win one for him."

Saturday’s weather is considerably cooler than Friday’s near-record high of 68 — about 50 degrees as today’s hot laps began — but it’s hardly the worst it’s been this week. When the expected high winds during the day didn’t really materialize, it turned out to be a very agreeable afternoon. … Brandon Sheppard of New Berlin, Ill., a two-time WWS winner this season, is competing Saturday in a second modified fielded by Dereck Ramirez of Woodward, Okla. … Dustin Holmes of Murfreesboro, Ark., is the lone new entry among Saturday’s 31 competitors. … Johnny Scott of nearby Las Cruces, N.M., isn’t competing on Saturday as he’s attending a wedding. … Sprint car star Donny Schatz of Fargo, N.D., is not in action as he competes in the Chili Bowl in Tulsa, Okla. Schatz is expected to return for Sunday’s $25,000-to-win finale. … John David Duffie of White City, Ore., made repairs to his machine after a hard crash in Friday’s prelims left his bumper crumpled and returned to action Saturday. … After failing to qualify for a Wild West Shootout feature in five previous season’s of trying, Thomas Hunziker of Bend, Ore., has made the starting lineup for each of the first four events this season. … Ricky Weiss’s quick lap of 13.942 seconds during time trials is the fastest lap of the week, giving the Canadian an inside line on the $1,000 bonus given to the driver who turns the week’s fastest qualifying lap.