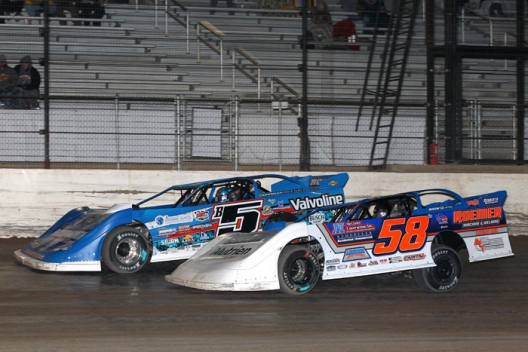 VADO, N.M. — In trying to avoid a slowing driver with a flat tire on the fifth lap, Brandon Sheppard nearly wrecked twice, his hopes for the Penske Racing Shocks $300,000 Paydirt Jackpot looking dim.

Twenty minutes later, the 28-year-old New Berlin, Ill., driver was standing in victory lane at Vado Speedway Park after a dramatic rally to outduel home-state hero Garrett Alberson and Texan Tyler Erb in the second round of the Wild West Shootout presented by O'Reilly Auto Parts.

"We didn't come here to run second," the 10th-starting Sheppard said after adding another $5,000 miniseries payday to go along with Saturday's victory.

The four-time World of Outlaws Morton Buildings Late Model Series champion is in position for a $300,000 bonus if he can sweep the final four races beginning Wednesday at the 3/8-mile oval, with hefty consolation prizes of $100,000 (for five victories) or $25,000 (for four victories) also in play in the bonus program.

If Sheppard collects bonus money, Sunday's victory might rank as the most unlikely as he was the fourth leader in a race where Alberson (laps 1-5, 12-38), Erb (laps 6-7) and Mike Marlar (laps 8-11) were official leaders in a 40-lap thriller with a dozen or more unofficial lead changes.

"Honestly I don't even remember half of it. It was definitely crazy," Sheppard said after his last-corner crossover move repelled Erb's last-ditch slide job. "It reminded me a lot of Fairbury (Speedway in Illinois) when it's really good and there's a lot of sliders going on. That was a heckuva fun race. Me and Terbo and Mikey and Alberson there. It was a good, hard, clean racing, and you can't ask for much more than that. I know we put on a good show for the fans tonight."

Sheppard's sixth career Wild West Shootout victory came by 0.189 of a second ahead of Erb, the New Waverly, Texas, driver who dove under the leader in turn three on the final lap to briefly edge ahead. The pole-starting Alberson, the Las Cruces, N.M., driver for Iowa-based Roberts Motorsports seeking his first miniseries victory, settled for third with Winfield, Tenn.'s Marlar and Jake Timm of Winona, Minn., rounding out the top five.

Alberson was in control with a two-second lead with 11 laps remaining, but he continually struggled on the high side in turns three and four as Sheppard closed in, pulling alongside exiting turn two with four laps remaining. Alberson edged back ahead, but when he bobbled and was forced to drop low exiting turn four on lap 38, it allow Sheppard to go by and nip Alberson at the line at the white flag.

On the final lap, Erb grabbed second from Alberson and took his best shot at Sheppard in the final corners, but it wasn't enough.

"As long as (Sheppard) entered on the top there, he was probably going to be able to cross me back. I definitely had to give it hell," Erb said. "We're going to make Shepp work for it. We can't just give him the money. I think tonight he should split it with me for putting on a show."

Sheppard, who started outside the fifth row, would like to win without so much drama.

"We've gotta do better qualifying," said Sheppard, who has been in the top five in WWS competition for each of his last 16 starts. "We got behind qualifying there and started third in the heat race and that put me behind and made me have to work a lot harder than I wanted to, that's for sure. I'm sure that's fun for the fans, but that's definitely harder on my equipment than I want to be."

Alberson promised his fans that "we'll get one for you guys," but it was a disappointing defeat.

"I'm not going to lie. I'm really bummed out. I've tried so hard to win one of these things and man it hurts to see it taken away at the end like that," he said. "Good job to Brandon and Tyler. We had a good race right there. I just got so tight I just couldn't (hang on) anymore. That just bums me out really bad."

Six cautions slowed the action, none for serious incidents.

A caution flew for a tangle between Jeff Schildmeyer and Clayton Holland on the backstretch before the field could take the green. Holland retired. Schildmeyer drew the race's second on the second lap when he spun in turn four.

The third yellow dropped on the fifth lap when Ricky Weiss, who ran in the top-five early, slowed with a left-rear flat tire and nearly left Sheppard nowhere to go.

A fourth-running Rusty Schlenk drew the fourth caution when he slowed on the ninth lap with engine failure (just after Mason Oberkramer pulled to the infield with a wadded up left-front tire).

The fifth caution appeared just before halfway when Cade Dillard, who started outside the front row, slowed while running fifth with issues to the right front.

The sixth and final yellow flag dropped on lap 23 for a turn-three incident involving Terry Phillips, Jason Papich and Johnny Scott, who retired with damage.

Weather conditions have changed quite drastically for Night 2 of the Wild West Shootout. After Saturday’s bright sun and high temperatures in the mid-60s, Sunday has brought overcast skies with temps only climbing into the 50s and a stiff, steady breeze keeping attendees chilled. … The Super Late Model count has grown to 34 cars with three new additions: Javier Zapien Jr. of El Paso, Texas, John David Duffie of White City, Ore., and Dustin Knight of Central Point, Ore. … Knight, who missed Saturday’s action due to travel trouble (his trailer came unhitched on the highway near Phoenix and hit into the back of his toter), saw his trip become even worse during hot-lap/qualifying. His car bicycled into turn one, came down on all four wheels, hit the outside wall head-on and flipped onto its roof. He escaped uninjured but his car sustained heavy damage. … Las Cruces, N.M., native Garrett Alberson recorded the overall fastest qualifying lap of 14.214 seconds in his Roberts Motorsports machine. With Cade Dillard of Robeline, La., quickest in the second group, both fast-timers were driving Black Diamond Race Cars. … Bobby Pierce of Oakwood, Ill., will stick with his battle-tested machine that he drove to a runner-up finish in Saturday’s feature after his brand-new car was sidelined by mechanical trouble when it was fired up before Saturday’s hot-lap/qualifying. … Don Shaw of Ham Lake, Minn., said the brake problems that forced him to retire early from Saturday’s feature were related to his car’s brake rotors. He changed the rotors for Sunday’s action. … Jason Quirion, who has served as Texan Allen Murray’s chief mechanic for the past several seasons, is at Vado in his new position working full-time with Earl Pearson Jr. of Jacksonville, Fla., for Californian Jason Papich’s team. Quirion said Murray sold the contents of his Dirt Late Model program in late November to Pennsylvanian Mason Zeigler.