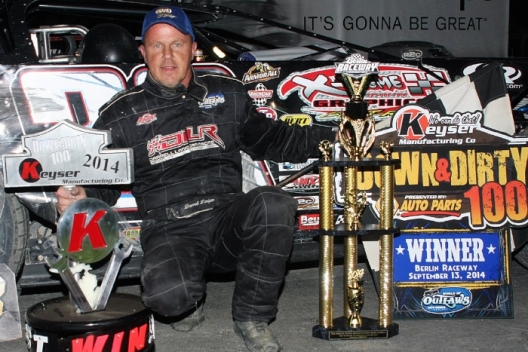 With his 16th World of Outlaws Late Model Series victory of the season, Lanigan, 44, of Union, Ky., broke his own single-season wins record on the national tour and ensured that the he needs only to enter the season-ending World of Outlaws World Finals Nov. 6-8 at The Dirt Track at Charlotte to clinch his third WoO championship.

"We broke a record and that's definitely something to be proud of," Lanigan, who broke the record he set in his championship-winning season in 2012, said. "And to be the only winner of this event is definitely special, too."

Advancing from the fourth starting spot, Lanigan battled back and forth with polesitter Jeep Van Wormer of Pinconning, Mich., for the lead early in the 65-lap race before taking command for good when Van Wormer ran into trouble as the two leaders raced through slower traffic on lap 13.

Slipping too high in turns three and four, Van Wormer tagged the wall and slowed directly in front of Lanigan's Club 29 Race Car, causing Lanigan to get into the back of Van Wormer's Rocket Chassis. The contact sent Van Wormer spinning as Lanigan continued running and assumed the lead.

"I have to apologize to Jeep," Lanigan said of his involvement in the lap-13 accident. "It looked like he got up in the wall and then he kind of came back down. We had a head of steam coming in there and got into him. It wasn't nothing on purpose."

Tim McCreadie of Watertown, N.Y., drove his Rocket Chassis from the 12th starting spot to briefly challenge Lanigan midway through the race before fading and settling for second at the finish. Shane Clanton of Zebulon, Ga., also pressured Lanigan through the race's middle stages before dropping to third at the finish in his Capital Race Car.

Rick Eckert of York, Pa., recovered from a lap-33 flat tire to finish fourth in the Rocket Chassis house car, while Scott Bloomquist of Mooresburg, Tenn., drove his Sweet-Bloomquist Race Car to a fifth-place finish in a race slowed by six cautions.

After taking second on a lap-41 restart, McCreadie appeared to have a car capable of challenging Lanigan for the victory. But Lanigan's car improved through the race's closing stages as McCreadie began to struggle with the handle on his own machine.

"I was having trouble steering from the center off," McCreadie said. "We're working on a lot of new things, trying to get better. I swear if we could just perfect it from the center out we'd have something special. I had to manhandle it a little bit and it's hard to be consistent like that."

Van Wormer was aiming to become the second home-state driver to win in three WoO events in Michigan this season, but his bid for his third-career series victory was denied by the lap-13 scrape with the wall that led to the tangle with Lanigan. Van Wormer remained in the race after the incident but eventually dropped out on lap 20 in finishing 19th.

While he acknowledged his own mistake spurred the accident, Van Wormer felt Lanigan could have avoid making contact.

"I got my right-rear into the loose stuff a little bit and I started to spin, but I could have saved it," Van Wormer said. "Lanigan just cleaned me up. I'm sure he could've hit his breaks, but whatever. Our car was really, really good. It's unfortunate because I didn't feel like he needed to punt me."

The first of the race's six cautions appeared for Van Wormer's misfortune. The second yellow waved when Kyle Borgman of Muskegon, Mich., got into the turn-four four on lap 14. Eckert's flat tire caused a lap-33 caution and he slowed again on lap 37 to bring out the fourth yellow. The fifth caution appeared when Chub Frank of Bear Lake, Pa., spun on lap 41, and the final caution was caused by a lap-58 spin by Frank Heckenast Jr. of Frankfort, Ill.