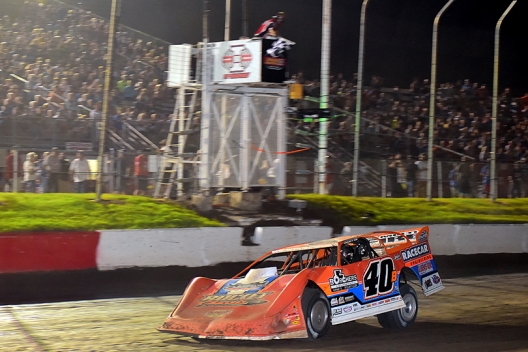 GREENWOOD, Neb. (July 24) — Kyle Bronson has been waiting impatiently for his turn to win a major event. On Saturday night at I-80 Speedway, that time finally arrived.

Taming the 4/10-mile oval’s outside line with aplomb, the 31-year-old driver from Brandon, Fla., earned the biggest victory of his burgeoning career, running away with the 80-lap Lucas Oil Late Model Dirt Series-sanctioned Imperial Tile Silver Dollar Nationals and a $53,000 paycheck.

Bronson overtook race-long pacesetter Chase Junghans of Manhattan, Kan., for the lead on lap 48 and never looked back. He perched his XR1 Rocket car on the track’s cushion and extended his edge seemingly at will over the remaining distance, ultimately beating 2017 Silver Dollar Nationals champion Tim McCreadie of Watertown, N.Y., to the finish line by a commanding margin of 10.492 seconds — roughly a half lap.

After letting loose with several post-race celebratory donuts in turn four, Bronson was hopeful that he had enjoyed his breakthrough triumph.

“McCreadie told me after you get the first one the rest of ‘em come easy,” Bronson said, “so I hope he’s right.”

McCreadie, 47, reached second place with a lap-66 pass of Junghans, but he was already over a straightaway behind Bronson. With the race running caution-free for its final 48 circuits, McCreadie never got his Paylor Motorsports Longhorn house car even within sight of Bronson before the checkered flag was displayed.

Earl Pearson Jr. of Jacksonville, Fla., who started 14th, grabbed third from Junghans on lap 72 and maintained the final podium spot to record a career-best SDN finish in the Black Diamond house car. Jimmy Owens of Newport, Tenn., the 2013 SDN winner, finished fourth in his Ramirez Motorsports XR1 Rocket while Junghans settled for a career-high SDN finish of fifth in his father Greg’s XR1 Rocket after leading laps 1-47.

Bronson started sixth but was up to second by lap 10 when he slid past Stormy Scott of Las Cruces, N.M. He proceeded to stalk Junghans, the outside polesitter who jumped out to the lead at the initial green flag.

Driving a car fielded by Wayne and Shirlene Hammond — his uncle and aunt — Bronson traded sliders at each end of the racetrack with Junghans several times before surging ahead on lap 48. Junghans appeared to be closing back in on Bronson about five circuits later, but then Bronson turned up the wick and ran away and hid from the field.

Bronson seemed to be running his machine to the limit as he slid around the speedway inches from the concrete wall and tore through lapped traffic, but he didn’t think he was pushing the issue too hard.

“I feel like we conserved it for about the first 40 laps until we took the lead, and then when we took the lead we were just rolling around that top,” said Bronson, who registered his first Lucas Oil Series victory of the 2021 season and the fifth of his career. “It’s pretty awesome to have that good a car and be able to set the pace and go as fast as I wanted to.

“The guys were telling me to go, go, go, get in the that clean air, and I was just like, my car was so dang good, I wasn’t getting in no hurry there. I knew I was gonna be able to be there at the end.”

Bronson spent the race’s final stages worried that his enormous advantage would be wiped out by a caution flag, but that never happened.

“What was going through my mind was, ‘This top’s pretty good here,’” Bronson related. “I knew I had a really good car, but I just knew there had to be two or three cautions with about 10 laps to go.

“But hey, it worked out my way. I guess it’s my time. I’m pretty pumped about it, pretty excited.”

McCreadie, who started fifth, gradually worked his way forward. He conceded that he was never quite as good as Bronson, however.

“Before the last yellow come out I was a little free (handling),” said McCreadie, the current Lucas Oil Series points leader. “We packed all that stuff down (in the inside groove) and the track came back a little bit and I could kind of maneuver there on the bottom and I could even roll the middle.

“But I was just so loose in that I just couldn’t run the outside (like Bronson). It’s such a long ways around that outside, and you gotta be be able to be stuck and be up in the air. I was sitting flat and turning right getting in, and when that happens, our car, it just takes me too long to go around the corner.

“There was a point when I thought maybe the track was dying up there and we got to all three of us racing, but once I put a little pressure on Kyle he moved his line a little bit into three and that changed the whole deal,” he added. “Watching him out there, he didn’t wing it (around the top). He was so under control. He looked like he probably had more in the tank if you’d got beside him.”

Pearson, 49, enjoyed his best finish of a frustrating 2021 campaign on the Lucas Oil Series. A change to his older Black Diamond car for Friday’s qualifying program seemed to energize him.

“The first two nights we had a new car out and it just didn’t like this racetrack or the tires, so we took Old Faithful out,” Pearson said. “Last night was pretty good and tonight we made some more adjustments and we hot-lapped good, and in the feature we could go in the corners there and just turn below ‘em and stick the right-rear and I had good traction.

“Late in the race there we got a little tight and couldn’t move around quite as good, but all in all, the way this year’s been … it’s been tough, but hopefully we can continue on from this.”

Two caution flags slowed the event. The first came on lap 22 when Jonathan Davenport of Blairsville, Ga., slowed with smoke trailing from his Double L Motorsports car and retired from further action with terminal mechanical trouble. Shortly thereafter, on lap 32, Shane Clanton of Zebulon, Ga., relinquished his spot in the top 10 due to engine woes that left a line of oil on the racing surface.

Notes: Bronson snapped a lengthy Lucas Oil Series victory drought dating back to his last win on May 20, 2020, at Golden Isles Speedway near Brunswick, Ga. … McCreadie entered the race with his lead in the Lucas Oil Series standings down to 45 points over Davenport, but his runner-up finish and Davenport’s 27th-place result pushed the difference back to 150 points. … Spencer Hughes of Meridian, Miss., spun into turn one after taking the checkered flag in ninth place. He lost control of his machine after making contact with another car exiting turn four. … Polesitter Stormy Scott ran in the top five throughout the race’s first half but slipped to eighth in the final rundown. … Ryan Gustin of Marshalltown, Iowa, used a provisional to start the feature but advanced to a 10th-place finish. … Fourth-starter Brian Shirley of Chatham, Ill., fell out of the top five following the lap-22 restart and continued fading over the remaining circuits to finish 16th. … Tyler Erb of New Waverly, Texas, and Brandon Overton of Evans, Ga. — the winners of features earlier in the five-night racing extravaganza at I-80 — were never factors in the finale. Overton finished 13th while Erb placed 15th. … During the post-race ceremonies, I-80 promoter Joe Kosiski announced that he will again present five straight nights of racing in July 2022 with the same format as this year: the three-day I-80 Nationals (two $7,000-to-win preliminaries and a $30,000-to-win finale) and the two-day Silver Dollar Nationals (double-heats on Friday, $53,000-to-win feature on Saturday). He said he’s adding two wrinkles — a $53,000 bonus if a driver can win all four features and a $20,000 bonus for capturing the two big-money shows.

Silver Dollar Nationals driver introductions — with each racer riding down the straightaway in the back of a pickup truck — began around 9:35 p.m. Following the ceremonies (during which track work was done) are the 25-lap modified feature and the 80-lap Lucas Oil Series-sanctioned headliner. … Polesitter Stormy Scott’s previous Silver Dollar Nationals finishes: 13th in 2019 and 18th in ’20. … Second-starter Chase Junghans’s best finish in four previous SDN feature starts is 15th in 2018. … Previous SDN winners in the field are Jimmy Owens (starting third), Tim McCreadie (fifth), Jonathan Davenport (seventh), Brandon Sheppard (12th) and Scott Bloomquist (15th). … The lone first-time Silver Dollar Nationals feature starter is Spencer Hughes, who starts 11th in the PCC Motorsports mount. … Making his first start of the year — and reuniting with former car owner Greg Junghans to drive Junghans’s son Chase’s second car —Omaha’s John Anderson finished third in a B-main to transfer. It’s his fourth career Silver Dollar Nationals A-main appearance but first since a 25th-place finish in 2014. … Ricky Thornton Jr. came from the back of the second B-main to earn a transfer spot with a fourth-place finish — but not without a late-race scare. With two laps remaining he lost fourth when Matt Cosner slid hard to the inside of turns three and four and made contact with Thornton, but Thornton returned the favor in turns one and two and Cosner went spinning into the outside wall.

Leading all the way from the outside pole, Boom Briggs of Bear Lake, Pa., captured the 20-lap S&S Showdown Non-Qualifiers' Race.

Briggs was never challenged in a 12-car event that was slowed by a single caution flag on lap eight when Allan Hopp smacked the turn-three wall. He beat Delaware's Ross Robinson to the finish line by a half-straightaway margin.

While Briggs had to option to start the feature, he decided to pocket the $5,300 first-place prize and drink some celebratory beers instead.