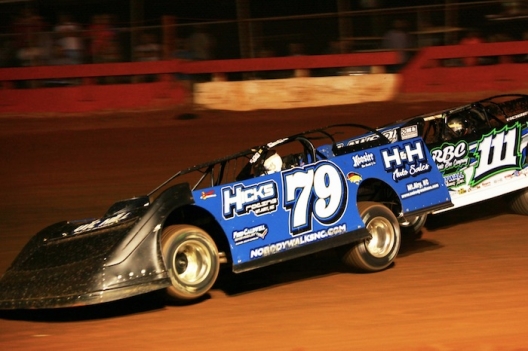 SYLVANIA, Ga. (July 24) — Ending his streak of bad luck on the Schaffer’s Southern Nationals in dominant fashion, Ross Bailes of Clover, S.C., led every lap of Saturday’s Rebel Yell main event to earn a $10,053 payday at Screven Motor Speedway. The pole-starting Bailes was never seriously challenged in racing to his second-career series victory and his first since also winning at Screven in 2019.

Bailes pulled his Billy Hicks-owned Longhorn Chassis to a lead of more than five seconds midway through the 53-lap race, but he ended up winning by a more modest 1.524 seconds after a mid-race caution erased his large advantage.

Steven Roberts of Jesup, Ga., ran second the entire distance, holding off seventh-starting Wil Herrington of Hawkinsville, Ga., for the runner-up finish. Kenny Collins of Colbert, Ga., finished where he started in the fourth spot and Cody Overton of Evans, Ga., moved up from ninth to round out the race’s top-five finishers.

The emphatic performance ended Bailes’s run of misfortune in Southern Nationals events that went back to last season, when while following the full series with Big Frog Motorsports, Bailes suffered a flat tire while leading or running among the top five in four series events. This year’s version of the tour started in the same fashion with Bailes suffering a flat while leading the series opener at Beckley (W.Va.) Motorsports Park on July 16.

Not surprisingly, Bailes was worried that the same bad luck was going to strike again as he headed toward the finish Saturday night at Screven.

“The whole time out there I thought I was feeling the right-rear go down. I was just worried the whole time. I was paranoid really,” said Bailes, who isn’t following the full series this season and at Screven made his first appearance on the tour since Beckley. “It was unheard of how many flat tires we had on this deal last year. It started off the exact same way at Beckley and I was like, ‘You have got to be kidding me!’ But it worked out for us tonight. I hope we’ve broke the curse.”

It shouldn’t come as a surprise that Bailes snapped his bad luck streak at Screven. The paper-clip-shaped quarter-mile has been good to him in the past with his 2019 Southern Nationals victory being one of many Late Model specials he’s won at he track.

“I love it,” Bailes said of the James “Redd” Griffin-owned racetrack. “It’s a different kind of track. It took me four or five trips here to kind of figure it out. There’s a couple ways you can approach it. I was kind of going in high and driving off kind of like a diamond almost. It took me a little while to get the hang of it, but now I love this track. You can race all over it. It’s fun.”

The race was slowed by just two cautions. The first, which erased Bailes’s massive lead, came with 18 laps compete when Brent Dixon of Elberton, Ga., slowed from the fourth position with a flat left-rear tire. The second caution came two laps later when a mid-pack tangle left seven cars piled up in turn one. None of the cars suffered significant damage.

Southern Nationals competitors head across Georgia on Sunday to wrap up the tour’s Peach State swing with a visit to Rome (Ga.) Speedway. The event pays $4.053 to the winner.

Notes: Eighteen cars were running at the finish with 12 on the lead lap. … Bailes became the fourth different winner in four Southern Nationals events this season; three series events have been rained out. … The victory marked Bailes’s fifth overall win of the season. It was also his first five-figure payday since he won a Lucas Oil Late Model Dirt Series event at Cherokee Speedway in Gaffney, S.C., on June 12, 2020.

Second-starting Ross Bailes got the jump on polesitter Brent Dixon in the first 10-lap heat race. Dixon pressured Bailes most of the distance before settling for second. … Cla Knight led every lap of heat two from the pole. Second-starting Wil Herrington took the lead on the initial start and led a full lap, but a tangle between Joshua Bishop and Ethan Wilson in turns one and two on the second lap led to a complete restart. The race was again slowed on lap two when Bishop lost a wheel. … Steve Roberts turned back mid-race challenges from Dalton Cook to win the third heat. Cook faded slightly late in the race and had to hold off Dale McDowell to finish second. … Kenny Collins led all the way in the fourth and final heat race. The race had a scary moment when Garrett Smith pounded the turn-one wall. He was OK, but his car suffered heavy damage to its rear.