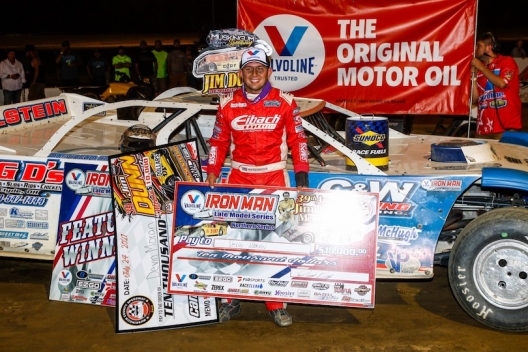 ZANESVILLE, Ohio (July 24) — If there’s a track in America that Devin Moran knows his way around, Muskingum County Speedway — a facility operated by the 26-year-old driver’s family — is it. But just because Moran has made lap after lap around the 3/8-mile oval doesn’t mean he’s perfect there. In fact, Moran was downright disappointed in his effort at his home track when the Lucas Oil Late Model Dirt Series came through town back on July 3.

After three cautions slowed the race in first three laps, only one yellow appeared in the final 37 circuits. Moran diced through lapped traffic midway through the feature, first pulling ahead of second-running R.J. Conley of Wheelersburg, W.Va., and then keeping runner-up Jacob Hawkins of Fairmont, W.Va., at bay. Moran finished 0.923 seconds ahead Hawkins for a $10,000 victory, his second of the weekend.

“Just so many people contribute to this team and I can't think all them guys. My Clements engine was a little hot, but it's running bad to the bone. To come out here in front of his hometown crowd and win like that is pretty sweet.”

Moran led all 90 laps of the two features he entered during the weekend as he also led the full distance in winning the unsanctioned 50-lap, $10,000-to-win Jeff Norris Memorial at Hilltop Speedway in Millersburg, Ohio, on Friday. The dominance continued Saturday at Muskingum County. Moran quickly pulled away from Jacob Hawkins on the start only to see a trio of early cautions erase the lead.

The first caution came on lap two when Zack Dohm, Dustin Nobbe, Todd Brennan and Michael Chilton were collected in a turn-two crash. A second caution flew for a two-car tangle on the restart. Despite series officials abandoning double-file restarts following the second caution, a third yellow appeared on lap three when Colton Burdette spun.

After that, however, Moran had 14 green-flag laps during which he could flex his muscle. Buzzing around the top of the track with ease, Moran was able to duck to the inside when he needed to get by slower machines. It was a fine scenario until his Tye Twarog-owned Longhorn began to get a little snug in the corners.

“Earlier in the race I really could (move around) and then later as the race went on I was kind of getting tight and then it would break free real bad,” said Moran. “So I was watching the (signal) sticks and I figured it was Jacob (Hawkins, closing in). I knew someone was close behind me. Luckily we just didn't mess up any. Like I said it's awesome to win here.

“I just got to thank my dad (Donnie Moran) and my grandpa (Ron Moran) and all these fans. We had an awesome crowd here. If it wasn't for these fans coming out last night and tonight we wouldn’t be able to race like we are, so I want to thank all them guys. Hopefully we can do it again here next year.”

Notes: It was Moran’s second career Iron-Man North Series win and seventh overall victory of 2021. His win at Hilltop on Friday was his first top-five finish in six events. … His previous victory on the first-year tour was May 8 at Atomic Speedway in Alma, Ohio. … Moran is the first repeat winner in nine series races this season. … Six of the 23 starters completed all 40 laps. … After winning his consolation race, Tyler Carpenter of Parkersburg, W.Va., suffered mechanical problems and was unable to make the call for the feature. … Muskingum hosted the Iron-Man Series for the first time.  … Michael Chilton of Salvisa, Ky., won Friday’s race at Ponderosa. … Saturday’s event was in memory of the late Dunn, the winner of the inaugural Dirt Track World Championship at Pennsboro (W.Va.) Speedway, who died in a racing accident at Paducah (Ky.) International Raceway on May 8, 1993. … A number of tracks have hosted Jim Dunn Memorials though the years, including Midway Speedway in Crooksville, Ohio and Ohio Valley Speedway in Washington, W.Va. … Devin Moran won the Jim Dunn Memorial at Midway on Oct. 6, 2018. … Moran’s father Donnie is a six-time Jim Dunn Memorial winner.