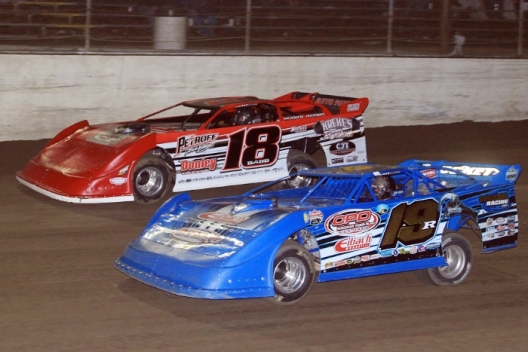 Babb, the 2014 Summernationals points champion, charged to an early lead at the drop of the green flag. Gustin cruised to the front of the field on a lap-13 restart, but was unable to hold on to the race lead, as Babb regained the point on lap 28 en route to his first victory at I-55 in two years.

“Ryan was really good tonight,” Babb said. “It looked like his car was turning good, doing everything right. The track was good. There was some obstacles out there, but that made for a good racetrack.

“I knew I had to do something there at the end. Little Bobby (Pierce) was really good. I figured that there was gonna be a lot of action happen there in one and two on the restart. Luckily, it turned out in my advantage.”

Gustin held of late-race challenges from Bobby Pierce and Billy Moyer to notch a runner-up finish. Pierce, of Oakwood, Ill., finished third, with seventh-starting Moyer taking the fourth-place spot. In what is expected to be his final start at I-55, retiring driver Randy Korte of Highlands, Ill., rounded out the top five.

“Shannon’s a good racer obviously,” Gustin said after the race. “It’s just a privilege for us to even run second to him as much as he’s been at these tracks and as long as he’s been doing it. I didn’t know it was only going to be 40 laps, or maybe would’ve tried a little harder right there.

“Went up top, kind of got it rolling better again, starting to reel him (Babb) in. Just kind of looking at the board, I figured it was 50 laps. I guess they shortened it. It is what it is. Good racetrack. A lot better than what we had last night. I’ll take that over racing the rubber. All in all a good night for us.”

Pierce advanced nine spots from the 12th starting position, finding himself right in the mix of the action in the race’s final laps.

“It sure was a mess,” Pierce said. “A lot of those guys just fighting for position. It was crazy out there … especially how rough it was … it gets tough to pass here when the track’s like that. You almost just got to be patient, wait for guys to make mistakes. And you can’t make a mistake. It was a crazy night. Just glad we picked up a podium.”

Trace Westling drew the race’s first caution when he spun on lap 13. Another yellow flew for Brian Shirley on lap 22 when he slowed on the racetrack. Jack Sullivan spun on lap 28 for the final caution.