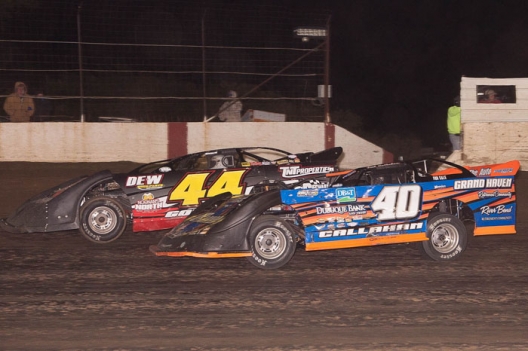 Callahan, the Dubuque, Iowa, driver who figured he turned 50 somewhere around lap 27, inherited the front spot when race-long leader Colby Springsteen cut his right rear tire on lap 74 and then led to the checkers in repeating as the big money Yankee winner.

“I think we step up our game for this race. There’s a lot of adrenaline pumping,” he said. “To me, this is the biggest race on the Deery schedule and not because of the pay but because it’s at my home track.

“The track was fast from top to bottom,” he added. “It didn’t matter where you were running.”

Richie Gustin of Gilman, Iowa, was second in the best showing of his brief Deery career. Denny Eckrich of Oxford, Iowa, was third and series points leader Justin Kay of Wheatland, Iowa, roared all the way back to fourth after exiting to fix a flat tire on lap 58 and restarting at the rear.

Hometown driver Jason Rauen drew the pole, but he quickly headed for the infield and it was Springsteen, of Wapello, Iowa, shooting into the lead from outside the front row.

After a flat tire for Ray Guss Jr. on lap 24 and an ensuing caution involving Guss and Nick Marolf, the race was stopped following a lap-30 mishap that collected Tyler Droste, Terry Neal and Jason Hahne, then stayed green for the next 28 circuits.

Springsteen looked to have the race in hand before the flat tire relegated him to 16th and Callahan took over.

“I focused on hitting my marks and keeping the car straight,” said Callahan, also winner of the $250 Sunoco Race Fuels feature qualifier drawing. “I knew if I did that we’d still have tires at the 75-lap mark. That was key.”