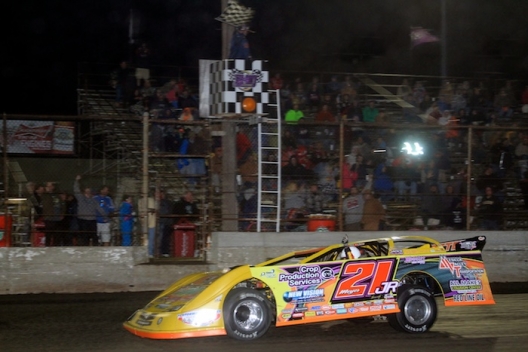 GRANITE CITY, Ill. (Sept. 12) — Billy Moyer Jr. of Batesville, Ark., went from third to first on a lap-22 restart, then fought off a serious challenge from eighth-starting Brian Birkhofer of Muscatine, Iowa, to grab his third $10,000 victory of the season.

Moyer took advantage of a slipup by polesitter Tim Manville of Troy, Ill., on the restart before the halfway point and led the rest of the way for a victory in the first half of the St. Louis Showdown.

Many of Tri-City’s competitors will head to Federated Auto Parts Raceway at I-55 in Pevely, Mo., on Saturday evening for the second of two $10,000-to-win events for non-touring UMP DIRTcar-sanctioned drivers.

“I think we’ve won three $10,000s, but this is by far the most difficult competition we’ve dealt with as far as being in victory lane,” the 26-year-old winner said. “My dad and (Shannon) Babb, Birkhofer, (Brian) Shirley, (Brandon) Sheppard, man, there are so many heavy hitters over here, (Jason) Feger, you can’t name 'em on. There’s 15 guys that can win here, and I’m just lucky enough to win. I’m just real thankful to be standing here right now, because tomorrow at Pevely, we could get lapped. So we’ll celebrate tonight and we’ll get to work tomorrow.”

Brian Birkhofer, who started outside the fourth row but took second from Moyer after a lap-19 restart, settled for a runner-up finish despite nearly taking command amid lapped traffic late in the race at the 3/8-mile oval.

Manville, who started on the pole, was third followed by Feger and the winner’s Hall of Fame father, Billy Moyer. Brian Shirley of Chatham, Ill., advanced four spots to finish sixth.

Manville took command from the outset with the younger Moyer giving chase before Scott Henseler’s lap-19 spin set up a restart that allowed Birkhofer to work the outside groove and grab second.

But a lap-22 scramble in turn one involving Jared Landers, Dewayne Kiefer and Brian Diveley reset the field, and Birkhofer’s attempt to use the outside groove again was nullified when Manville opened the door for the inside-running Moyer.

“It wasn’t the best,” Manville said of his restart. “We got into (turn) one and the car shoved a little bit. It just felt like the right front kind of skated right across the track. I tried to gather it back up coming off of two, but it didn’t the same thing in three. Billy, it was there for the taking, and he got underneath us.”

Moyer was quick to take advantage with Birkhofer briefly stuck behind Manville.

“Birkhofer got me on that one start, and I figured we weren’t going to get him back,” the winner said. “Then on that next start, Manville kind of went in there and got a little push, and I just shot that back. I got a good start on that frontstretch … we timed it pretty good and got lucky enough to get by him, and we had a good hot rod after that.”

While most competitors stuck with the lower groove, Birkhofer thought he’d give it another shot on the outside for the mid-race restart.

“I trucked up there and got to second, and I had to pick (a lane for the restart), and I thought 'I’m going to pick that again.' The only problem was, (Manville) made his (car) a little bit wider, which killed my momentum getting into (turn) one,” Birkhofer said. “Then he got into one and two and got into a push, and pushed up and gave Junior the free line to go and take the lead and go on.”

After a lap-23 caution involving Shannon Babb, Billy Laycock and Jack Sullivan on the backstretch, Moyer kept Birkhofer in check, although things got interesting late in the 50-lapper when the leader was briefly held up trying to put a lap on the slower Laycock.

“You’ve just gotta learn to be good in lapped traffic,” Moyer said. “I almost made a mistake and somehow I got through there. I knew Birkhofer was behind me and he runs me clean.”

Birkhofer watched it develop but getting alongside Moyer on the outside wasn’t enough.

“I’ve been in that position, and Billy was like, 'OK, I’ve gotta try to get underneath him.' … I had a good run, but I knew that getting into (turn) three where I was, I wasn’t going to get by him,” Birkhofer said.

“I was going to get out there and feel like I was on a gravel road off (turn) four, and that’s exactly what happened and Billy drove off. I just was trying to make it interesting … I got up there, and it felt like you were on jackstands off four there if you got out of the rubber. I had to take my shot to try to get him, and you know, he’s stout. He ran well.”