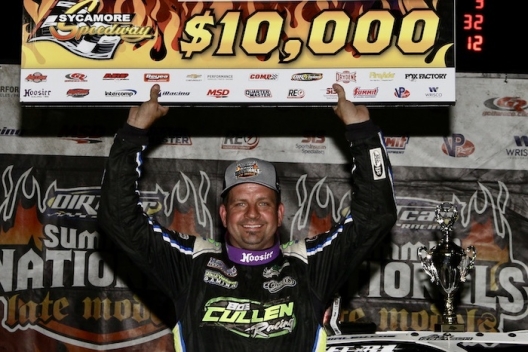 MAPLE PARK, Ill. (June 25) — Brian Shirley may be hitting his stride and that could be trouble for the rest of his DIRTcar Summer Nationals foes. After a lackluster opening week, the four-time and defending series champion from Chatham, Ill., has finally found his footing during the second week of the grueling two-month long chase.

Leading every lap from the pole at Sycamore Speedway on Friday, Shirley won his second straight DIRTcar Summer Nationals race, surviving a late challenge from Bobby Pierce of Oakwood, Ill., for his second series win of the season and 35th of his career. His first series win at Sycamore was worth $10,000 and helped the reigning champion chip into the points lead of Pierce, who finished a half second behind.

It was the second straight feature that Shirley led from start to finish. But while he dominated Wednesday’s tour stop at La Salle (Ill.) Speedway, Friday’s win was a bit more challenging, in part because of Pierce’s relentless pursuit and in part because of a heavy track that made making consistent laps a bit tricky.

“It was a little bit of both,” said Shirley. “I felt like I couldn’t shake (Pierce) there. I got away a little bit and then he would catch back up, so I was just trying to find something to see if I could get some distance on him. You know the 32 is good for a reason and we're just lucky that we was able to stay ahead of him.”

Shirley repeatedly banged his right rear tire off the thick cushion in turns three and four, upsetting his Durham-powered Rocket Chassis while allowing Pierce to close in. Meanwhile, Pierce, who grabbed the second position from Winger on the lap-13 restart, had trouble of his own.

Just four laps after looking to the inside of Shirley in turn two, a big push sent Pierce’s car up the track, allowing Shirley to gain a bit of breathing room. Pierce wasted no time trekking the leader back down but was never in position to complete a pass.

After the opening week of the series failed to produce a victory with Shirley managing just two podium finishes — including a disqualification at Kankakee for failing to go straight to the scales post-race — Shirley’s second week couldn’t have gotten off to a better start. Each of the second week’s venues are within a three-hour drive of Shirley’s shop, with Sunday’s race at Jacksonville less than an hour from home. The veteran driver realizes this is his best opportunity to make move in the tour standings.

“It's huge for my team and all my sponsors and (car owners) Bob and Lisa Cullen and my crew, just them, my wife, my dad, my kids …” said an emotional Shirley in victory lane. “Everybody, like, they just don't understand, you know, I'm going home tonight (and) I'm stopping and picking up one kid, going to get ‘em home. It’s just a lot of emotion, but we keep digging and maybe we'll get another win here or there.”

Notes: The race was slowed by three cautions, all in the first half of the 40-lapper. … The first caution waved on lap three when 13th-running Lyle Zankler of Rockford, Ill., got over the cushion and stopped in turn one. Joe Godsey pulled pit side during the lap-three yellow but returned to action. … The second yellow was on lap 18 when Sycamore’s T.J. Markham slowed on the front stretch. … The final caution came on the lap-18 restart, a result of Mike Spatola of Manhattan, Ill., getting out shape in turn three, collecting Rich Bell, Titus Sneed, Doug Tye and Godsey in the process. … Seventeen of the 22 starters finished the race, with 10 completing 40 laps. … This was the seventh event of the tour’s 36-race slate and the fifth time the series has stopped at Sycamore. … There hasn’t been a repeat winner at Sycamore as Summer Nationals stalwarts Billy Moyer (2017), Shannon Babb (’18), Bobby Pierce (’19), Brandon Sheppard (’20) and now Shirley each have a tour win at the track located about an hour west of Chicago.

Tim Lance Jr. had to be towed to the pit area in the first of three heat races after losing his left-rear wheel. … Bobby Pierce used the high side to move around Tanner English for second midway through the 10-lap prelim, but he couldn’t run down winner Ashton Winger. … Brian Shirley ran unchallenged in winning the second heat. … Rich Bell caused a lap-eight caution after contact with Ryan Unzicker while battling for third flattened Bell’s left-rear tire. … Jason Feger’s victory in heat three came after two lengthy red-flag periods. The first came when Greg Cantrell got into the back straightaway wall on lap five, and the second was for Toby Kuntzelman’s wild rollover wreck on lap eight. Both drivers appeared to be uninjured.