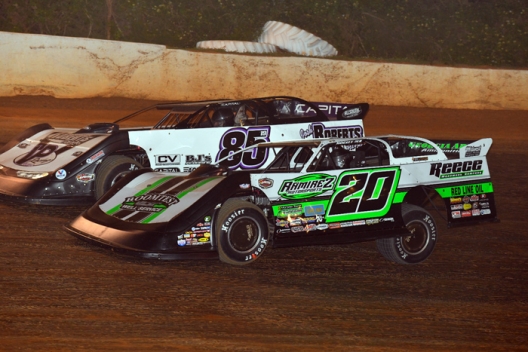 SEYMOUR, Tenn. — When Jimmy Owens tripped the clock at 15.320 seconds in Monday's time trials at 411 Motor Speedway, he was feeling pretty good about his chances in the ninth annual Scott Sexton Memorial.

But it caught his attention when fellow Tennessee driver Randy Weaver went 15.309 to set fast time at the 3/8-mile oval.

"I laid down a pretty good lap and I thought, 'Man, it's going to be hard to be that.' Then daggone if Randy didn't beat it," Owens said.

But when the big money was on the line in the feature race — the $10,052 prize signifying the No. 52 driven by late driver Scott Sexton — Owens got another crack at outrunning Weaver. The Newport, Tenn., driver made the most of it, going past his Crossville, Tenn., counterpart on the 26th of 52 laps and pulling away in the caution-free main event.

With his victory, he became the first repeat winner in the Sexton Memorial (he also won in 2019) and also became the lone repeat winner on the Schaeffer's Spring Nationals, which wrapped up with fourth-place finisher Dale McDowell of Chickamauga, Ga., securing the championship. (The race was co-sanctioned by the Valvoline Iron-Man Racing Series.).

Weaver, back to dabbling in Super Late Models after sitting out most of the last five seasons after suffering a concussion in a 2016 accident, finished 2.568 seconds behind Owens at the checkers while Ashton Winger of Hampton, Ga., was third. McDowell was fourth with Mike Marlar of Winfield, Tenn., rounding on the top five on a night when 40 Super Late Models crowded the pits on a beautiful Memorial Day.

Weaver got the jump from his pole position, but the third-starting Owens quickly gave chase and was able to work a little lower on the track as the race headed toward the halfway point. Weaver pulled alongside and then nosed ahead to lead lap 26 and edge away.

The winner's lone scare came with nine laps remaining when Owens found it a little dicey trying to put a lap on Jensen Ford. Dispensing of Ford, Owens cruised the rest of the way.

Heading back to Tennessee after an eighth-place finish at the Show-Me 100 in Wheatland, Mo., Owens was glad to grab the victory, saying his "car's been phenomenal and the crew's worked their tail off."

The handling on Weaver's car wasn't as good at the race's conclusion as it was at the beginning.

"Hat's off to Jimmy and his guys. They're good everywhere, but especially here," Weaver said. "We went a little different on tire combination ... we just held on as long as we could. We don't race all the time like these guys do, but we like coming out and running with 'em every once in a while. It was a super good car.

"We just missed it on our setup a little bit, and the driver's pretty rusty, too. ... It was a good night for us."

Winger, who started outside the front row, held the third spot all race long.

"I knew early there I wasn't going to be able, probably, to (compete) Randy and then when Jimmy got by me on the start, I figured I'd have to ride and take what I could get," He said. "But congrats to Randy and Jimmy. Man, that Jimmy knows how to get around here."

Notes: Owens remarked in victory lane about remembering Scott Sexton, a 10-time winner on the Southern All Star circuit. "I enjoyed watching him race through the years, and you know, all the big guys would come to town to race, and they'd have their work cut out for 'em." ... Owens lapped all but nine competitors. ... Among early retirees were Lucas Oil Late Model Dirt Series regulars Tyler Erb and Kyle Bronson. ... Dale McDowell's Spring Nationals title was in hand when Donald McIntosh struggled back in the pack and retired on lap 38.