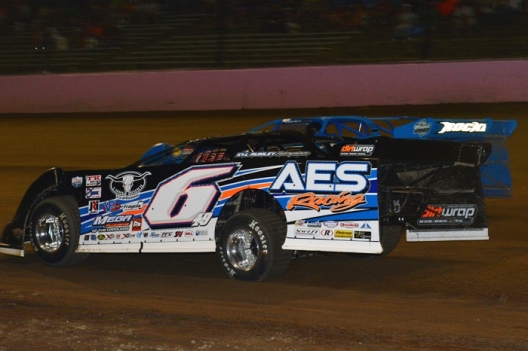 He turned things around in Friday’s opening feature. Blitzing the front-row starters by going from third to first on the opening lap, Davenport led all 25 laps for a $5,000 payday.

“We worked really hard trying to get us a win here,” Davenport said. “We’ve won a couple heat races. Me and Kevin, we made a big swing at it here. We did last night and it was the wrong way, but tonight I think was the right direction.”

Davenport built a straightaway lead after seven laps and turned back a mid-race challenge from sixth-starting Scott Bloomquist, then survived a late restart before taking the checkers.

Bloomquist drew within several lengths as the frontrunners entered traffic by lap 13, but over the next few laps, Davenport stepped up his aggressiveness to put a cushion of four lapped cars between his No. 6 and Bloomquist’s No. 0, drawing away before a lap-19 caution for Brian Shirley, who stopped at the end of the frontstretch.

With the field bunched with six laps remaining, Bloomquist started alongside Davenport, who immediately returned to the high side of the track to a high groove that was too much for everyone else as he pulled away to win by more than a half-straightaway.

Davenport, who was hampered by brake problems in last year’s World 100 and accepted the blame for a wreck that knocked him out of June’s $100,000-to-win Dream, gained some confidence heading into Saturday’s $47,000-to-win weekend finale.

“Now I know that you can actually pass at this place, and you don’t have to take everything you can get, when you get it,” Davenport said, “and just kind of pace myself and be there for the 100 laps.”