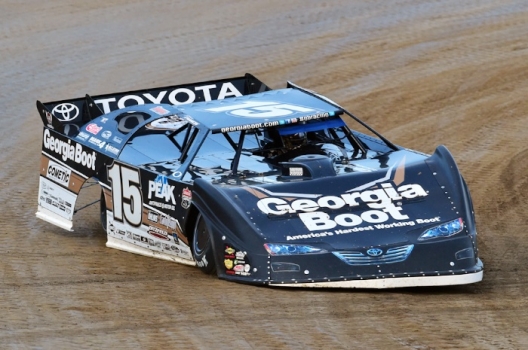 The 46-year-old driver from Ashland, Ky., was triumphant in the debut run of his latest Clint Bowyer Racing machine, winning the National Dirt Racing League’s PENNational 50 to register his first-ever checkered on the fledgling Dirt Late Model tour and first victory in nearly 18 years at PPMS.

Francis made his move on lap 19, diving to the inside of race-long pacesetter Jonathan Davenport of Blairsville, Ga., entering turn three and surging ahead to assume command for good. He turned back a late bid from Brian Birkhofer of Muscatine, Iowa, to secure the $10,000 winner’s check.

“Tommy (Grecco) and the guys really put a lot of effort into this race car,” Francis said of his chief mechanic and the rest of his CBR crew. “It feels like we were snakebit here the last three or four weeks — we’ve been good, but we’ve just had some things happen. It’s just kind of a confidence booster to get things back rolling with this new car.”

Birkhofer, 42, chased Francis for the final 30 laps but couldn’t summon the necessary speed in his three-race-old Rocket car to pull off a pass. He settled for second place, 1.242 seconds behind Francis at the finish.

The 30-year-old Davenport led laps 1-18 — after making a spectacular outside charge from the fourth starting spot to first on the opening circuit — but slipped to third at the finish in the K&L Rumley Longhorn car.

Kent Robinson of Bloomington, Ind., marched forward from the seventh starting spot to finish fourth in his Club 29 Race Car. He grabbed fourth in the final laps from first-time PPMS entrant Brandon Sheppard of New Berlin, Ill., who came from the 10th starting spot to complete the top five in the Rocket Chassis house car.

Francis started the A-Main from the pole position, but he was outgunned at the initial green flag by Davenport, who drifted out of line toward the top of the track as the field rolled through turn four and got a superb run down the homestretch. Davenport was in second place by turn two and vaulted by Francis through turns three and four.

“I thought, This could be a long race here,” Francis said when asked for his reaction to Davenport’s wholeshot. “But it’s like as soon as the racetrack lost a little bit of grip, he kind of come back to us. I felt like the slicker it got, the better our car got.”

Davenport agreed with Francis’s assessment. While he enjoyed his impeccable start, he wasn’t able to see it through to the checkered flag.

“Kevin (Rumley) come over and told me before we went out there that all them (open-wheel) modifieds were restarting up there on the top,” said Davenport. “We rolled around through there (on the pace laps) and it was still wet up there. I gassed up one time and had plenty of traction, so I said, ‘Might as well try it.’ I guess I timed it right and everything worked out good to get us in the lead.

“But we were still just a little too tight. We’re still just learning this thing in the slick, and we just didn’t free up enough. While there was a little moisture out there to hold us we were fine, but the slicker it got, the tighter the race car got.”

Francis had no such problem. Finding the right line around the fast, shiny half-mile oval wasn’t easy, however, with Birkhofer bearing down on him.

“It was a typical nighttime Pittsburgh, icy-slippery racetrack,” said Francis. “We just had to move around a lot tonight. The place just kept changing.

“(When) we got in all those lapped cars (running) two-wide right there at the end, I wasn’t sure where to go. I got myself in the middle of the racetrack and spun the tires a couple times.”

In a race slowed by just a single caution flag — on lap 24 when Jared Miley of South Park, Pa., fell off the pace on the homestretch — Birkhofer within a car length of Francis several times during the late stages. But before Birky could make a move, Francis’s crew chief provided some possibly race-saving signals from his position in the infield.

“Grecco stood down there in (turns) three and four and when I made some time up (on Francis) running the inside I saw him signaling to Steve,” said Birkhofer, who started third. “He had Steve down there on the bottom in the next corner. I think Steve probably needs to congratulate Grecco a little bit for helping him win the race

“But that’s what you need to do. Hell, I’m running second so I need to maneuver and take some shots at him. He’s leading and trying to make the fastest line he can — he’s not gonna move around if he doesn’t think he needs to.”

Notes: Francis’s only previous win at PPMS came in a STARS-sanctioned event on May 25, 1996. … Chris Madden, who entered the event leading the NDRL points standings, drove the car his chassis builder, Scott Bloomquist, used to win last year's $100,000-to-win Dream at Eldora Speedway. Madden, who destroyed his own primary machine in a crash April 5 at Smoky Mountain Speedway in Maryville, Tenn., picked the car up at Bloomquist’s shop Sunday and reskinned it with his No. 44 and sponsors. His eighth-place finish kept him atop the NDRL championship battle. … Bub McCool, who debuted a new Victory Circle car, won the first B-Main with a last-lap slide-job pass of Michael Davis through turns three and four. ... NDRL rookie William Thomas never made it to the track after his trip from Alabama was delayed by multiple flat tires on his hauler. … Non-qualifiers included Devin Moran, Mike Knight, Doug Drown, Walker Arthur and Chris Garnes. … Ryan Montgomery of Morgantown, W.Va., won the 20-lap RUSH Crate Late Model feature. ... With rain a possibility for Friday night’s NDRL show at Winchester (Va.) Speedway, NDRL officials announced that Winchester management has agreed to a Sunday raindate if wet weather would stop Friday’s action and Virginia Motor Speedway’s Saturday-night NDRL program is completed as scheduled. (VMS has the first option for a Sunday raindate).