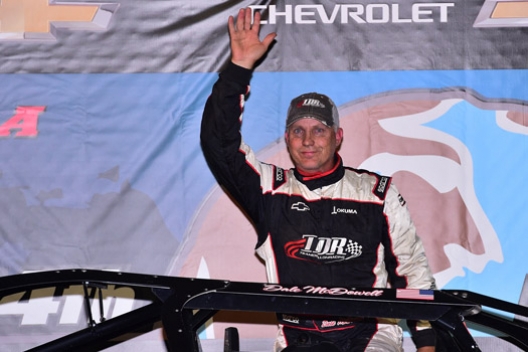 ROSSBURG, Ohio (Sept. 4) — With the World 100 on the horizon, Dale McDowell’s dreamy Eldora success is continuing.

Starting outside the front row, the 48-year-old driver from Chickamauga, Ga., led all 25 laps in the first of two preliminary features Thursday on the opening night of the 44th annual World 100 weekend. The victory is McDowell’s third in a row at Eldora going back to June’s $100,000 payday in Dream XX and a preliminary feature the night before that windfall.

While McDowell has a different Warrior Race Car than the piece that carried him to success three months ago, his No. 17m appeared to be just as fast as when he rallied from 22nd in the 100-lap Dream.

“I think the race car’s pretty good,” McDowell said. “It’s a different car than we had here for the Dream. We wrecked the other one up at Lernerville (Speedway) and didn’t have time to get it back together. But so far, so good.”

He knows three wins in his last three starts at Eldora means things have been falling into place for Team Dillon Racing.

“There’s a lot of good racers here, so there’s a lot of ingredients that has to go in to having a good night,” McDowell said. “All these guys here are professionals. It could be anybody’s night. We just hope that we put all the pieces together to make it ours.”

While McDowell led comfortably most of the way he stayed ahead of a late challenge from Randy Weaver of Crossville, Tenn., who started eighth and turned in his best career Eldora finish with a runner-up showing. Weaver was on the move early, taking second from polesitter Gregg Satterlee of Indiana, Pa., on ninth lap and trying to cut into McDowell’s half-straightaway advantage.

Weaver slowly edged a bit closer past the halfway point, then with six laps remaining began driving harder into turns one and three to close in on McDowell as the frontrunners approached lapped traffic.

But Weaver never got closer than five lengths as McDowell kept him at bay in running the high side all race long.

“I can’t say enough about my team. We’ve got really good equipment and we’re just finally getting to get out and hopefully show some of that,” Weaver said. “We took off pretty good and seemed like I used my tires up pretty early. I thought I could run Dale down, but we just kind of got to him and set about the same pace. But this is Eldora and this guy’s done proved he could win here.

“We feel good about our car. We qualified third tonight. So hopefully the rain will stay away tomorrow and we’ll get some more of it tomorrow. Anytime you can make laps at this place it’s very valuable. Hopefully the track will be about the same tomorrow … make a few little tweaks … and we might can be somewhere up toward the front.”

The race ran caution-free with all but one driver running at the finish.

Correction: Fixes that McDowell won his third straight feature at Eldora, not second.