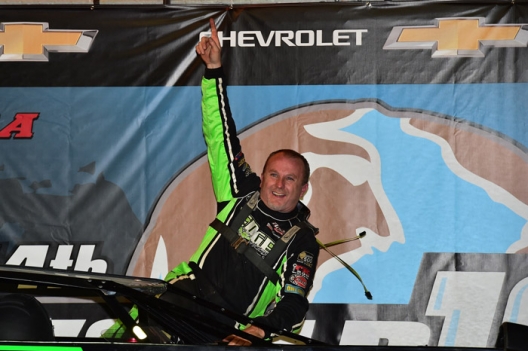 ROSSBURG, Ohio (Sept. 4) — What Jimmy Owens lacked early in the night at Eldora Speedway, he made up for it in the night’s closing 25-lap feature.

Roaring to the front from his 14th starting spot in the 24-car field, the Newport, Tenn., driver went from fourth to first over a four-lap stretch just past the race’s midpoint, overtaking polesitter Chris Madden of Gray Court, S.C., on the 15th lap and racing to victory.

“We qualified, and had some stuff go wrong qualifying, and was pretty good in our heat race, and had a couple of problems there. But we got all the bugs worked out and was able to move up through there,” said Owens, a two-time World 100 winner. “I didn’t expect to win it, but I knew we had a lot better car than what we did in our heats and qualifying.”

A pair of slower cars gave Owens a little trouble late in the race with fellow Club 29 Race Car driver Kent Robinson of Bloomington, Ind., threatening to track the leader down, but he broke through for breathing room in the final laps.

“Traffic here is always worrying, and I was worried we maybe had everybody out-tired, but maybe my tires were going to give up,” Owens said. “We was able to hold everybody off.”

Robinson, who started fourth but slipped back to sixth early, had an ill-handling race car after getting knocked around in his heat race earlier in the night.

“Yeah, we’re happy. Second, like I said, to run second to Jimmy, I’ll take it at Eldora,” Robinson said. “But we had that contact there in that heat with (Dustin) Linville, and I think it knocked the servo out of it and we didn’t change it. We knew what it was, but it didn’t fix it. It was a handful out there. It was shaking everywhere.

“I knew I needed to get to the bottom, but I thought maybe I could just hang on in the middle. When Jimmy passed me down there, I knew I had to get down there, but it shook way worse when I was down there, so I finally just manned up and got down there, and said, 'If I wreck, I wreck.' To come home second, we’re happy.”

Robinson, driving the new car he guided to victory Sunday in Sunoco American Late Model Series action at Eldora, is looking forward to Friday’s prelims and Saturday’s big show with $47,000 on the line.

“It’s a momentum builder. That’s why we’re here … the car’s really fast right now. That’s encouraging. The team’s working together well and I think we’ve got some momentum going into tomorrow and into Saturday.”

Jeff Babcock of Wayne, Ohio, started outside the front row and led the first five laps, but he slipped to an eighth-place finish in a race with a single caution flag.

The first start was called back when for the tail-starting Dustin Linville’s turn-two spin.