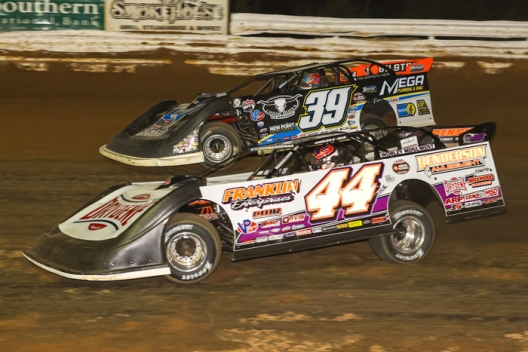 While the 47-year-old star from Watertown, N.Y., never relinquished the top spot after coming off the outside of the front row to surge ahead of polesitter Chris Madden of Gray Court, S.C., at the initial green flag, he might have watched Madden glide by him midway through the race if not for some savvy, well-timed instruction from his head wrench Philip Snellen.

“Chris was getting ready to maybe go around us there and I saw Phil on the backstretch change the way he was signaling,” McCreadie said after earning $10,000 for his first WoO triumph of 2021 in five A-main starts. “I thought, Man, I can’t believe there’s anything out there (on the outside). I moved up a little bit and carried some speed, and then once we caught lapped traffic it kind of locked down.”

McCreadie’s lane-shift stemmed Madden’s momentum enough so he was still firmly in front when the inside groove took rubber shortly thereafter. The Lucas Oil Late Model Dirt Series points leader — who entered Friday’s WoO program with his Donald and Gena Bradsher-owned Longhorn car only because rainy Midwest weather forced an early cancelation of the weekend’s Lucas Oil doubleheader in Illinois — controlled the final circuits to beat Madden by 1.164 seconds.

Scott James of Bright, Ind., finished third after his early outside charge — from the eighth starting spot to third in eight circuits — stalled at the show position. WoO travelers Ricky Weiss of Headingley, Manitoba, and Tyler Bruening of Decorah, Iowa, completed the top five.

Richmond’s track crew reconditioned the 3/8-mile oval for over an hour following uneventful qualifying races in hopes of improving the racing for the feature. The work brought the relatively flat speedway’s outside line back to life enough to work to McCreadie’s advantage.

“The track did a good job trying to give us something,” said McCreadie, who used the added moisture to ring the top and grab the lead from Madden as the first lap was scored.

Madden, 45, knew he was most likely in a tough position when he saw the racing surface’s condition for the start of the feature.

“They worked on the racetrack for us to at least give us an opportunity to race there,” Madden said. “T-Mac was definitely in the right line on the start there whenever they wet the racetrack. It definitely gave him a line up there, but congratulations to him.”

Madden drew closest to McCreadie on laps 22 and 23, inching up to the leader’s outside through the corners. But he couldn’t sneak by before McCreadie slid up to occupy his lane — and after McCreadie opened some space on Madden, the 2006 WoO champion moved back to the bottom when he reached slower traffic and stayed in the rubber to the finish, including after a final caution flag flew on lap 37.

“Sometimes you get complacent (with a lead),” said McCreadie, who registered his second win in as many weeks — he captured April 17’s Lucas Oil Series stop at Hagerstown (Md.) Speedway — and third overall victory of the season. “And once (Madden) started coming I probably stayed down longer than I should have. Then finally I saw Phil was kind of frantically (signaling), ‘Get up! Get up!’ And I thought, Boy, he must really be coming.

“It’s part of this racing. I probably would’ve been a sitting duck without the (crew) guys, but also I’ve been the other way. So we’ll take it.”

Madden wasn’t exactly satisfied with his runner-up finish after starting from the pole position in his Franklin Enterprises XR1 Rocket car, but it was nevertheless a profitable night for his WoO title chase. He pulled into a tie for second in the WoO points standings with Kyle Strickler of Mooresville, N.C., who finished 22nd after causing the lap-37 caution flag because his car’s hood flew up to block his vision, and closed within 46 points of leader Brandon Sheppard of New Berlin, Ill., who started and finished ninth.

“We had a good car tonight. We did all we could do,” Madden said. “It was a good points night for us, so we’ll head home and get ready for next week (the WoO-sanctioned Hawkeye 100 at Iowa’s Boone Speedway).

“We’ve never been here (and) we put ourself in contention to win tonight. It just didn’t roll our way there on the start.”

James was the race’s biggest mover in the Dolhun Racing XR1 Rocket, but all of his passes came in the first eight laps. He took advantage of the moisture put in the racetrack for the feature and rode it as far as he could.

“We’ve been here quite a bit, a lot of big shows, so when the they watered it I figured it was gonna rubber up — and it did about 20 laps in — so I had to make a move and get to the top (early) and it felt really good,” said James, who made his fifth start of the season. “Them (crew) guys (for McCreadie and Madden) do give good signals, I’ll give ‘em that, because when I got to Chris he moved back to the top.

“It’s really good to run with these guys and get to the podium. Right now the feel that I have in the race car is giving me a lot of confidence to come out and race with these guys.”

The race’s two caution flags were put out for minor incidents. Dustin Linville of Bryantsville, Ky., slowed on the first lap and pulled off the track and Strickler paused the race on lap 37 with his hood problem that left him with a 22nd-place finish.

Notes: McCreadie’s victory was the 33rd of his career on the WoO tour, tying him with Scott Bloomquist for seventh on the circuit’s all-time win list. … After splitting with Viper Motorsports while sitting eighth in the WoO points standings, Darrell Lanigan of Union, Ky., entered Friday’s show driving his buddy Boom Briggs’s second car. He finished 23rd after retiring just after the halfway mark. ... Tommy Bailey of Corbin, Ky., clocked the fastest lap in the second qualifying group, but he was disqualified because his car failed WoO technical inspection after time trials. ... WoO rookie contender Ryan Gustin of Marshalltown, Iowa, missed his first series event of 2021, but his absence was due to hauler trouble en route to the track so he received hardship points.