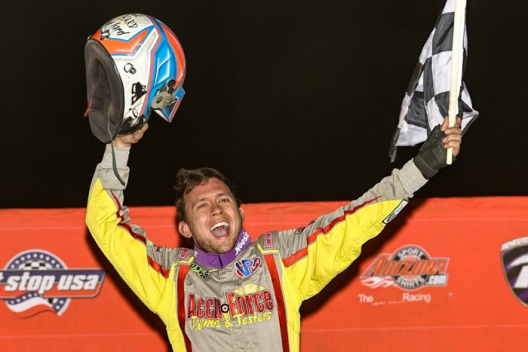 ALMA, Ohio — Devin Moran’s 2021 season just keeps getting better. Less than two weeks after claiming a $25,000 victory at Bristol Motor Speedway, the 26-year-old racer from Dresden, Ohio, collected another big payday in Thursday’s Fireball 50 at Atomic Speedway, earning $22,000 for his flag-to-flag performance in the Castrol FloRacing Night in America-sanctioned event.

The rich triumph didn’t come easy for Moran, however. Although he controlled the entire distance from the pole starting spot, Moran needed some help from a timely caution late in the race and then had to hold off the hard-charing duo of Jonathan Davenport of Blairsville, Ga., and Bobby Pierce of Oakwood, Ill., in the final laps to score his first victory at Atomic in nearly four years.

“It’s pretty freaking awesome to come down here and win,” said Moran, who considers the 3/8-mile oval located roughly two hours south of his hometown as one of his home tracks. “I haven’t won here in forever it feels like. This is one of, if not my favorite track, so to come here and win in front of the hometown crowd on a Thursday night, it’s pretty badass.”

Moran, who started the mid-week event by setting fast time among the race’s 28 entries and won the first heat race, jumped to the lead over second-starting Davenport on the start of the 50-lap race and cruised through the race’s first half. But Davenport began closing the gap to Moran as the race entered the closing stages and had just taken the lead on lap 39 with a turn-two slidejob before the race’s final caution appeared to negate the move before the lap was completed.

“I couldn’t see Wylie where we were at and I wasn’t running as hard as I should in three and four,” Moran said, referring to his brother Wylie Moran and the signal sticks he uses to signal his driver when a competitor is closing. “Luckily we got that caution. From then on out I was just going as hard as I could.”

Even driving his Tye Twarog Racing Longhorn as hard as he could, Moran still found himself in the crosshairs of Davenport and the late-charge Pierce. The two drivers pressured Moran after the race went back green with all the three cars riding the track’s high line as slower traffic came into play in the closing laps.

Catching the tail of the field with four laps remaining, Moran ducked low to attempt to pass a slower car entering turn three. The move almost cost him the lead as he failed to clear the slower machine and had to slide back in line on the front straightaway, allowing Davenport to close to his back bumper.

But Davenport didn’t have the momentum to attempt to pass Moran entering turn one, and Moran put the slower car between him and his pursuers with an aggressive slidejob the next time through turns three and four.

“I really messed up,” Moran said of his early move to the low groove in traffic. “I went to the bottom a lap early. That really made me nervous. I thought J.D. (Davenport) was gonna run off the top and cross me over. Thank goodness I had enough of a gap there. I got him the next corner and sailed from there.”

Moran took the checkers with a lead of 0.795 seconds over second-place Davenport. Pierce settled for third with eighth-starting Hudson O’Neal of Martinsville, Ind., fourth and seventh-starting Boom Briggs of Bear Lake, Pa., fifth.

Davenport, who was looking for his fourth victory of over $20,000 on the season, bided his time before making his charge to catch and pass Moran on lap 39. But it turned out that his move was a lap too late as the race’s final caution for Tyler Erb’s flat tire slowed the field before the lap was completed to make the pass official.

“I saved and saved and saved, and finally turned the wick up there and ran him down,” Davenport said of his charge to the lead. “Just ran him down there and thought it was a perfect opportunity. Sliding here, you almost have to play chess because you got to slide him in two corners before you really want to pass him because you lose so much momentum. I thought we had him there, but then the caution came out. I really killed my tire trying to get to him right there.”

After struggling to a fourth-place finish in his heat race and getting off to a slow start in the feature, Pierce surprised himself with his charge forward in the second half of the feature. He thought he had a shot at getting by Davenport and Moran, but his charge stalled in third.

“I didn’t expect that for sure,” Pierce said of his run forward. “We struggled in the heat big time. I was just loose up until the feature. We really had to tighten up the car more than normal. I wasn’t really sure what the deal was, but I wasn’t expecting a third-place finish.

“I was kind of just hanging on and cautions played in my favor and I got some spots. We got to third and J.D. and Devin were right there. I was like, ‘man, maybe we have something for them.’ But then I started getting looser off of two. Every time I’d catch them, they’d pull me off of two.”

The race was slowed by six cautions with the first appearing with seven laps complete when Tanner English of Benton, Ky., spun on the back straightaway. The second caution came on the ensuing restart when a scramble back in the pack led to a pileup the collected Jimmy Owens, Tyler Millwood, Mason Zeigler and Ryan King.

A flat left-front tire forced heat three winner Tim McCreadie of Watertown, N.Y., to slow from the sixth spot, causing the race’s third caution with 25 laps complete. The fourth yellow flag waved for debris on lap 30. Tyler Carpenter of Parkersburg, W.Va., slid into the back straightaway on lap 31, causing the race’s fifth caution, and the sixth and final caution on lap 38 was for Erb’s flat tire.

Notes: Thursday’s race was the second on the year for the first-year Castrol FloRacing Night in America tour. Davenport won the opener at Tyler County Speedway in Middlebourne, W.Va., on April 15. … Moran’s two previous victories on the season were both sanctioned by the World of Outlaws Motor Buildings Late Model Series; he won Feb. 11 at Volusia Speedway Park in Barberville, Fla., and at Bristol Motor Speedway on April 11. … Jimmy Owens of Newport, Tenn., failed to log a qualifying time due to frontend issue on his first timed lap. He recovered to win the consolation race before getting caught in an early wreck in the feature. He again recovered to climb as high as third before settling for seventh at the finish.