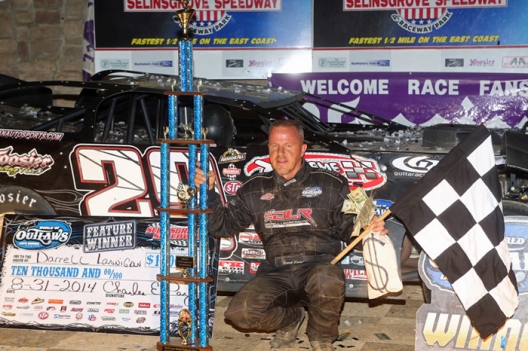 SELINSGROVE, Pa. (Aug. 31) — Darrell Lanigan made sure his stellar 2014 World of Outlaws Late Model Series campaign will be remembered as one of the best ever on the national tour with a dominating victory Sunday at Selinsgrove Speedway.

The two-time series champion and current points leader scored his 15th WoO victory of the season at the historic half-mile oval, tying his own single-season win record set during his championship-winning season in 2012. Lanigan paced every lap of Sunday's 50-lapper, earning $10,650 for his second straight victory in Selinsgrove's National Late Model Open.

"This definitely means a lot," Lanigan said of the record-tying performance that marked his series-leading 68th career WoO LMS victory. "We go every week to win a race so to get that many wins just shows how great a car we have and how hard we're working. That would be a helluva record to break."

Lanigan was never seriously challenged after starting from the pole in his Club 29 Race Car. He crossed the finish line 3.572 seconds ahead of Rocket Chassis house car driver Rick Eckert of York, Pa., who finished second to Lanigan in the National Late Model Open for the second straight year. Shane Clanton of Zebulon, Ga., was third in his Capital Race Car with Austin Hubbard of Seaford, Del., fourth in his MasterSbilt by Huey ride and 12th-starting Chub Frank of Bear Lake, Pa., fifth in his Rocket.

Lanigan's impressive victory came on the second night of Selinsgrove's two-race weekend. In Saturday's Showdown on Sand Hill, Lanigan set fast time and won his heat race but had to start 23rd in the main event after his car weighed in light at the scales following his heat race victory. He salvaged the night by charging through the field to finish fourth but felt that he had a car capable of winning the event.

"I definitely would've liked to have started up front last night because as awesome as this car is, I think we could have got another win," said Lanigan, who claimed the opening leg of the WoO weekend tripleheader Friday night at Lernerville Speedway in Sarver, Pa. "But it is what it is and things happen. I'm just glad they treat everybody fair.”

Lanigan's biggest challenge in Sunday's race was negotiating lapped traffic. That proved difficult on multiple occasions, especially as Lanigan attempted to lap hometown driver Jim Yoder during the race's closing laps. With Eckert steadily cutting into his lead, Lanigan struggled to find a way around Yoder and even made contact with the slower machine inside of five laps remaining. He finally got around Yoder on lap 47 and cruised the remaining distance.

"I was just trying to get away from him there," Lanigan said of his close call with Yoder. "There was a little bit of contact, but I didn't mean to get into him. I was trying to get through there and it was getting close."

Eckert again fell just short of ending his season-long winless streak in WoO action, but continued his streak of solid performances at Selinsgrove. In finishing runner-up to Lanigan for the second straight year, Eckert scored his fourth top-five finish in the four WoO races held over the last two years at the track where he began his Late Model career in the mid-1980s.

"It's always great to come back and race near home," said Eckert, who finished third in Saturday's Showdown on Sand Hill behind Tim McCreadie and Clanton. "Our car was really good. We probably missed a little bit on tire choice, but still we got a second. That's pretty good."

Clanton's third-place effort came in a backup car after his primary mount suffered mechanical issues during hot laps. His backup machine proved up to the challenge, however, as he bagged his second top-three finish in as many nights.

"We had to get Old Faithful here out," said Clanton, who has improved his performance since debuting a new Capital car in a near victory Aug. 22 at I-96 Speedway in Lake Odessa, Mich. "It's amazing what all we've went through during the year. To struggle as bad as we have and change some stuff on this car like the other car, this one's as good as the other one. At least we got two good pieces now."

Tim Fuller of Watertown, N.Y., charged from his 16th starting spot to finish sixth, while McCreadie, also of Watertown, finished seventh after running among the top five early in the race. Hometown driver Dylan Yoder turned in his second solid performance on the weekend with an eighth-place finish, while Selinsgrove veteran Jeff Rine of Danville, Pa., finished one position behind Yoder for the second straight night in ninth. Morgan Bagley of Longview, Texas, rounded out the race's top 10 finishers.

The race was slowed by two cautions. The first appeared on the first attempt to start the race when outside polesitter Coleby Frye of Dover, Pa., slid high entering the first corner and tagged the wall. He rolled to a stop on the backstretch and retired to the pit area when the yellow waved. The second caution appeared with 27 laps complete when Matt Cochran of Williamsport, Pa., slowed with a flat tire.