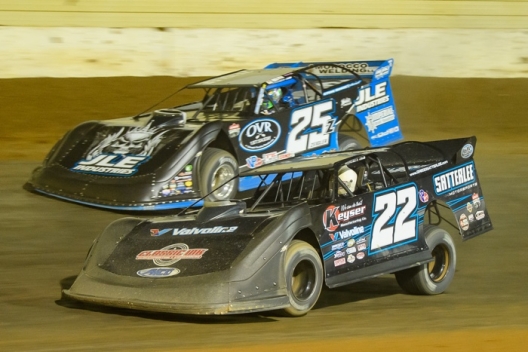 BEDFORD, Pa. (Oct. 24) — Gregg Satterlee had the right tire on his car for Bedford Speedway’s surface. But he also had the best car.

Mastering the half-mile oval during the second half of Saturday night’s third annual Keystone Classic, the 36-year-old driver from Indiana, Pa., overtook race-long pacesetter Mason Zeigler of Chalk Hill, Pa., for the lead on the 39th circuit of the 60-lap feature and then glided away to a convincing victory worth $20,000.

“We used to run here quite a bit and run really well,” said Satterlee, whose two previous wins at Bedford came in 2015 and ’19. “I won a race here last year, but really, ever since we got these new (XR1 Rocket) cars, we’ve haven’t been really good here. We kind of dug back in the notebook a little bit further from our old (Rocket) cars and kind of made some different adjustments from what we normally do here and it was pretty damn good.”

The triumph represented a career-high winner’s payout for Satterlee, whose three previous checks of 20-grand or more were for runner-up and third-place finishes. It also was his 10th overall win of 2020 — his first paying more than $4,000 — and came after he finished second in last year’s Keystone Cup.

Satterlee wasn’t challenged following a final restart on lap 47 en route to defeating Zeigler by a commanding margin of 4.460 seconds — about a full straightaway on the massive fairgrounds track. Both drivers used Hoosier 1450-compound tires rather than the harder 70-compound rubber that was utilized by third-place finisher Darrell Lanigan of Union, Ky., fourth-place Tim McCreadie of Watertown, N.Y., and fifth-place Michael Norris of Sarver, Pa.

Starting fourth, Satterlee quickly bolted to second place past the polesitting Lanigan on a lap-one restart. But he relinquished the spot back to Lanigan following a lap-six caution flag — a fall that altered his strategy slightly but didn’t cause him to overreact.

“I really screwed myself up on that (lap-six) restart,” Satterlee said. “I passed Darrell and got into second and I thought I wanted to pick the top (for the Delaware double-file restart), but I just got into second and I started on the bottom and that cost me a lot of time (after Lanigan made a pass). But I knew my car was good so I just had to be patient and let it all play out.

“There was plenty of time and plenty of laps to get up and pass the cars if your car was good,” he added, “and mine was.”

Satterlee settled into third, allowing Zeigler, who had outgunned Lanigan for the lead from the outside pole at the initial start, and Lanigan to race unchallenged in their positions throughout the race’s caution-plagued first half. He turned up the wick, however, after the crossed flags were displayed, ducking underneath Lanigan to grab second on lap 32 and duplicating the move to assume command from Zeigler on lap 39.

“I could keep right with those guys, and I just knew I had to be patient and follow them and just wait for them to make a mistake,” Satterlee related. “I don’t think either one of them really screwed up, but they were just losing a little bit of time in the corners and I could just stay underneath them and maintain.”

Satterlee caught Zeigler without four circuits of overtaking Lanigan. He needed only three more laps to move in front for good.

“(Zeigler) just got where he was getting on the brakes in the center because he couldn’t turn,” Satterlee analyzed. “I got a run on him and I was beside him going into (turn) one, and I just hung a left and slid him. I mean, that was the only option to pass.

“He had the same problem Darrell did,” he added. “He couldn’t run across the center.”

Negotiating the corners was no problem over the remaining distance for Satterlee, who raced unchallenged to the finish.

“I could roll through there pretty easily,” Satterlee said. “Just don’t get too excited with the gas pedal, don’t punch the brake pedal too hard. Just go in there and hang a left, pick the gas up nice and easy, and don’t slide or do anything.

“I was being pretty gentle — every straightaway, every corner entry.”

Zeigler, 28, conceded that Satterlee simply had a machine that was superior to his XR1 Rocket down the stretch.

“At the end of the day, we were just tight (handling),” said Zeigler, who won Sept. 4’s Labor Da 55 at Bedford. “That bottom just really latched up right around the hub, and I was good if we could momentum. If I could’ve just momentumed and kept ‘er straight, kept ‘er wide, we would’ve been fine, but it really latched up right around the bottom of three and four and I just couldn’t rotate.

“The tires were right. We were good on tires,” he added. “Gregg just was better in the end.”

The 50-year-old Lanigan mourned his decision to bolt a 70-compound tire on the right-rear corner of his Viper Motorsports-fielded Barry Wright Race Cars house car. He wasn’t able to get the rubber to fire to his liking and found himself racing close in the final laps with two other 70-shod racers: the Longhorn house car driven by the third-starting McCreadie and the Todd Cerenzia-owned XR1 Rocket piloted by Norris, who started and finish fifth but slipped back to seventh at one point.

“We put the 70 on for that race and it never did ever get going,” said Lanigan, who swept Friday’s qualifying program (fast time, semi-feature win, dash victory) to earn the pole position for the finale in his first Bedford appearance since 2009. “It was just on top of the ground the whole time.

“I knew (the tire choice was incorrect) on the initial start, but I figured (the surface) would clean up a little bit and get going. But they kept throwing that dirt up across there and it would never get going. You’re kind of stuck to one lane when it gets like that.

Eight caution flags slowed the race. None of the slowdowns were for serious incidents and all but one came during the event’s first 23 laps.

Notes: Rick Eckert never seriously threatened to defend his 2019 Keystone Cup victory, finishing 10th after climbing as high as seventh from his 13th starting spot. … Jeff Rine, the 2018 Keystone Cup winner, used his provisional for being this year’s Bedford champion to start the feature after fixing a broken rocker arm that knocked out his Elbin Racing No. 92 during a Friday semi-feature. He turned four laps and pulled off according to plan. … Jason Covert triggered the lap-15 caution because a deflating right-rear tire had caused a vibration in his Cameron-Mann Motorsports car. He slowed again on lap 22 due to left-rear tire problems and, with two new rear tires, ran the remainder of the distance without a problem and finished 13th. … Jim Yoder borrowed a car to collect his $1,000 start money after his own machine was sidelined by an apparent broken timing chain during Saturday’s hot laps. … Making his first career Super Late Model start, Tyler Ritchey escaped injury in a wild flip over the turn-four wall during Saturday’s consolation. He was battling for the final transfer spot on lap four when his car slid sideways in the fourth corner, snapped back to the right and was hit by Dylan Yoder, launching him into a series of rolls that saw him clear the guardrail before coming to rest.

Making his first Bedford start since finishing third in a 2009 World of Outlaws Morton Buildings Late Model Series event, Lanigan, 50, led every circuit of the semi-feature and the 6-lap dash in his Viper Motorsports-fielded Barry Wright Race Cars house. He duplicated the 2019 Keystone Cup opening-night effort of then BWRC house car driver Ross Bailes of Clover, S.C., who earned the pole starting spot for last year’s edition of the unsanctioned race with a sweep of the qualifying program.

Lanigan survived survived a late-race challenge from Michael Norris of Sarver, Pa., to emerge victorious in the second of the evening’s two semi-features. Norris pulled to Lanigan’s outside as the pacesetters raced through lapped cars down the homestretch on lap 14, but Lanigan preserved the top spot by sliding up the track in turn one.

In the Pole Dash that determined the top six starters in Saturday’s A-main, Lanigan outgunned Mason Zeigler of Chalk Hill, Pa., who started from the pole after winning the first 16-lap semi-feature, at the initial green flag and never looked back. He crossed the finish line 1.723 seconds ahead of Zeigler, who will share the front row with Lanigan in Saturday’s headliner.

Tim McCreadie of Watertown, N.Y., finished third in the dash. He was the runner-up in the first semi-feature, finishing just 0.452 of a second behind Zeigler after drawing within striking distance of the winner on the final circuit.

Taking positions 4-6 in the dash was Gregg Satterlee of Indiana, Pa., who finished second in last year’s Keystone Cup; Norris; and Matt Cosner of Ridgeley, W.Va.

Saturday’s hot laps are scheduled to begin at 5 p.m. Super Late Model B-main action as well as qualifying events for the modifieds and Late Model Sportsman is set for 5:30 p.m. with the 60-lap Keystone Cup feature scheduled as the first feature to hit the track following driver introductions at 6:30 p.m.