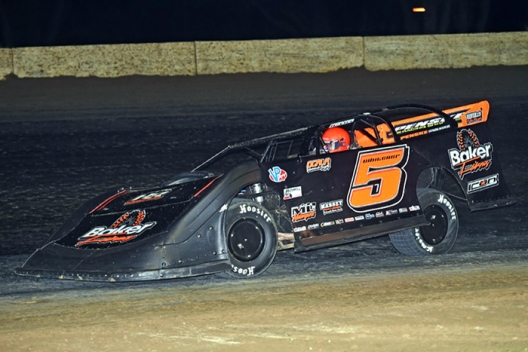 But don’t think the 40-year-old Middleburg, Fla., driver wasn’t going to do his best to win Sunday's race-record winner’s prize in the 67-lapper postponed 24 hours by rain.

Whitener indeed did just that, overtaking early leader Clay Harris on the 15th lap, then fighting off challenges from Cory Hedgecock and Michael Brown to earn $25,000 and the richest victory of his career in one of the season’s most lucrative Crate Late Model events.

“This is the biggest win of my career on top of being the Powell Family Memorial. This is bad-ass,” the sixth-starting Whitener said, his voice cracking in victory lane. “This ain’t just a race for me. Me and James became friends when I drove the 58 of Audie Burttram. I didn’t know (Powell) that well before then, I knew of him, but this is more than just $25,000-to-win.

“Yes, it’s more money than I’ve ever won, but this is the Powell. Family. Memorial. This is the biggest race in Florida. All these boys come from out of town … this race can’t be any bigger. It’s awesome. It can pay 50-grand next year and it doesn’t matter, it can’t get any bigger.”

Whitener, who lost the lead to Brown on the 50th lap but went right back ahead on the following circuit, pulled away late to win by more than four seconds over national touring driver Earl Pearson Jr. of Jacksonville, Fla., who made his first Powell Memorial appearance.

The pole-starting Brown, the Pageland, S.C., driver who slipped up entering turn three to allow Whitener back ahead on lap 51, was third. Michael Page of Douglasville, Ga., advanced eight positions in finishing fourth and Kyle Bronson of Brandon, Fla., who ran as high as second, ended up fifth. Harris, who led the first 14 laps, was sixth.

Cory Hedgecock of Loudon, Tenn., ran second most of the way, but he got into the outside wall exiting turn two trying to make an outside move on Whitener on a lap-48 restart and retired.

Whitener started the weekend with plans to drive the Dale Mosley-owned No. 38 entry with his brother David Whitener in his traditional No. 5. But after Whitener practiced in the No. 5 car, he reversed his plans with Mark climbing back into the No. 5 and David piloting Mosley’s car.

With Harris taking the early lead from outside the front row, Whitener made steady progress, grabbing the third spot on the third lap, moving into second on the 12th lap and taking command on lap 15.

Hedgecock put some heat on Whitener 10 laps later, and again on the lap-48 restart when he got alongside the leader at the flagstand. After surviving Hedgecock’s challenges, Brown went ahead on the next restart and briefly went ahead on lap 50.

“I got taken to school on a restart. I had to regroup and straighten the wheel out where I was beating on it because I lost the lead on a restart and that’s usually where I’m strong at,” Whitener said. “I knew I had a really good race car when I was behind (Brown). He was real good, but when he went off into the corner, I knew he went in too hard. When he missed with the rear, I knew I had to hit it. I hit it wide open and luckily it stuck. I didn’t get into him because I wanted to race him clean, but yeah, I was glad he missed the corner there.”

From that point one, he ran unchallenged. Pearson, the Black Diamond Chassis house car driver and four-time Lucas Oil Late Model Dirt Series champion, was 2.2 seconds behind when he moved into second on the 59th lap, but Whitener didn’t let him get any closer.

“I knew when the bottom was dominant, I knew Earl was coming,” Whitener said. “There’s no scoreboard here, but I knew he was going to be there. I didn’t know he got to second, but it doesn’t surprise me.”

Pearson competed in a rare non-Speedweeks home-state event, but he ran outside the top five until the final 18 laps.

“I don’t get to come around here and race with you guys very much, but I enjoyed it tonight,” Pearson said. “The track was a little bit different than what we had the last three nights there. We missed the setup a little bit, but them restarts were definitely helping me. Mark, he was the class of the field, there ain’t no doubt about that.”

The third-finishing Brown, the weekend’s fast qualifier, turned in a solid performance but wasn’t a match for Whitener or Pearson at the finish.

“Like we said, all the crew sat down before the race and said we had pretty much exceeded our expectations coming down here and racing with these guys,” said Brown, who established the track’s Crate Late Model record in Friday’s qualifying. “This is a lot different than Carolina clay, for sure. To run with ’em, I’m very blessed. I’m just really upset with myself that when I did get the lead, I did miss the bottom like I did, but congrats to Mark and Earl. It’s a privilege to be standing on the straightaway with these guys.”

The race was slowed by seven cautions, the only multi-car incident coming on the third lap when Johnny Collins, Ivedent Lloyd Jr., Bo Allen and Cody Overton were involved in a minor turn-four pileup.

Garrett Lloyd ended up facing the wrong way for a lap-17 yellow, a lap-23 caution appeared for debris and Patrick Williams slowed for a lap-35 yellow. The fifth yellow appeared when eighth-running Ross Bailes, who started 22nd, slowed on the backstretch; his Ocala, Fla.-based Big Frog Motorsports car was pushed off the track.

Hedgecock’s demise provided the sixth yellow and the seventh and final slowdown came when Jordy Nipper climbed the wall between turns three and four on lap 54.

Notes: Whitener’s sixth Powell Memorial victory broke a tie with former asphalt standout Wayne Anderson, who had five Powell Memorial victories on paved tracks. ... Trey Pearson was racing for the first time with his father Earl Pearson Jr.; he finished seventh. … Jeremy Faircloth was scheduled to start 24th after earning the final transfer spot in a Saturday consolation race, but he wasn’t able to return and Treveor McKinley got the spot.

Saturday's conclusion to the $25,000-to-win Powell Family Memorial has been reset for Sunday afternoon after thunderstorms interuppted Saturday's program at All-Tech Raceway. The storms moved over the half-mile track just after Saturday's consolation races for the Crate Late Model were completed.

Gates open at 3 p.m. on Sunday with a drivers meeting scheduled for 4:45. Racing is scheduled to begin at 5:30 with the Crate Late Model non-qualifiers race set to kick off the action. A modified feature will run second followed by the 67-lap Powell Family Memorial main event.