Information provided by: Kevin Kovac (last updated September 17, 9:03 am)
Sheppard pulls away for $15,000 Fairbury victory
One for the Road presented by I-Beam Sliding Doors 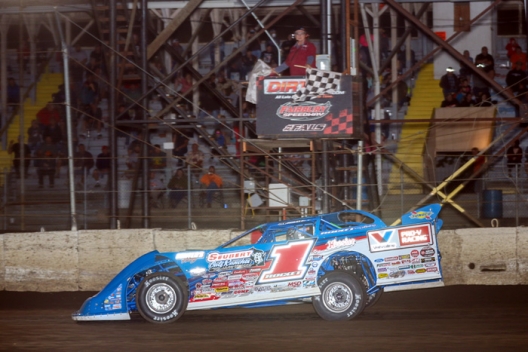 FAIRBURY, Ill. — There was no Prairie Dirt Classic this strangest of years at Fairbury (Ill.) Speedway. But Brandon Sheppard of New Berlin, Ill., didn’t let the season slip away without grabbing a big paycheck at the quarter-mile fairgrounds oval tucked among the town’s residential streets.

The Rocket Chassis house car driver, winner of the previous two Prairie Dirt Classics, became the fifth leader Tuesday by blowing around Shannon Babb on lap 36, becoming the fifth of five leaders in the One for the Road presented by I-Beam Sliding Doors and edged away for a $15,000 victory at a track he clearly loves.

Emerging from a mid-race free-for-all with a half-dozen drivers in contention, Sheppard expected nothing less than a race with five leaders with the checkers up for grabs most of the way.

“I’m not surprised one bit,” Sheppard said in victory lane. “That’s FALS for you, how about that fans?”

Sheppard took the checkered flag 1.616 seconds ahead of pole-starting Josh Richards of Shinnston, W.Va., who led 17 mid-race laps in his first trip to Fairbury in four years. Officials ruled that 17th-starting Bobby Pierce of Oakwood, Ill., nosed out 10th-starting Frank Heckenast Jr. of Frankfort, Ill., at the line for third after checking videotape of the photo finish while Shannon Babb of Moweaqua, Ill., who led laps 30-35 before giving up the top spot to Sheppard, rounded out the top five.

Two other leaders weren’t around at the finish. Outside front-row starter Brandon Overton led the first 12 laps, but quickly slipped back to fifth and retired after a turn-two spin on lap 38. New track record-holder Kyle Strickler of Mooresville, N.C., who stole the lead briefly from Richards on lap 24, stopped on the frontstretch with driveline problems on lap 35 while running fourth.

The 50-lapper was a race where plenty of drivers got their chance to shine out front, but none until Sheppard pulled far enough ahead to feel reasonably comfortable. Three drivers took turns leading during one seven-lap stretch from 24-30 — Strickler, Richards and Babb — with Sheppard starting to roll on the high side in going from fourth to first from lap 31-36.

“That’s awesome man. It’s such a privilege to be able to race here,” Sheppard said, quick to credit his crew. “During these hard times and everything, we’re glad to be racing period, but to be able to racing still this close to home and at this great of a racetrack, this place puts a lot of places to shame, if you ask me. …

“We’ve had kind of a rough couple of weeks here, and we’re definitely glad to be back in victory lane. We couldn’t do it without all the great supporters that we have,” he added. “It’s just so much fun to drive this thing, especially here. I didn’t know how good the race was going to be as fast as the (track) was, but it came through again.”

Richards fell back to third when Sheppard went by, but he recovered for a respectable runner-up finish behind the driver of No. 1 Rocket car he once drove. With Sheppard out front, Richards knew one thing for sure: “He's not going to mess up.”

But Richards, a former Prairie Dirt Classic winner, enjoyed his return to Fairbury.

“I had a blast out there. That top was pretty treacherous down there, and I let my guard down a little bit, because I knew Shannon (Babb) was running low, Strickler was kind of running low and I was moving around. I just should’ve just stayed up there and gouged it the whole time. But Sheppy did a good job.

“He showed me something different down in (turn) one, just to enter a little bit higher. Once we did that, we got a lot better. But a couple of times I lost the wheel and got by thumb stuck and got twisted around and didn’t know which way it was going. We gave it our all and just came up short. I just want to thank all the fans for coming out and we had a blast.”

Heckenast initially showed as the third-place finisher on the transponder scoring after battling side-by-side down the final straightaway with Pierce. But Pierce received the last podium spot after officials looked at the video and determined that the 23-year-old was slightly ahead of Heckenast on the inside of the track.

“Frankie pulled a slider there and I was barely hanging on,” Pierce said. “Luckily I got him back there at the line. I know I got him by a nose.

“Treacherous racetrack,” he continued. “I’m wore out. I asked Josh if he was wore out and he said he was. Coming from 17th … I was set up a little tight. We come back and got a good finish out of it so I’m happy."

Heckenast, meanwhile, was satisifed with his performance.

“We just can’t start back (in the field) with these kind of guys," Heckenast said. "Them guys up front are the best in the country, but I like to get a good finish here. Brandon’s a local Illinois boy, but I feel like we’re one of the locals here, and hopefully we put a good show for everybody.

“I know the front two were kind of gone there at the end, but I tried to make a little pass there at the end (sliding under Pierce through turns three and four) and make it interesting for everybody.”

Besides the yellow flags for Strickler and Overton, the only other caution came on the 41st lap when Kyle Bronson stopped at the top of the backstretch.

Notes: Sheppard notched his 27th victory of the season overall. … Six drivers completed 50 laps and eight were running at the finish. … Jeremiah Hurst and Myles Moos passed 14 cars apiece and split the $1,000 hard charge award posted by Steidinger Construction. … Dennis Erb Jr. was the first retiree of the main event, immediately pulling to the infield as the green flag flew. … Brian Shirley transferred to the main through a heat race, but engine problems forced him to load up early, giving Moos a spot in the main event. … Kyle Strickler’s 12.143-second lap broke the 9-year-old track record held by hometown driver Scott Bull.