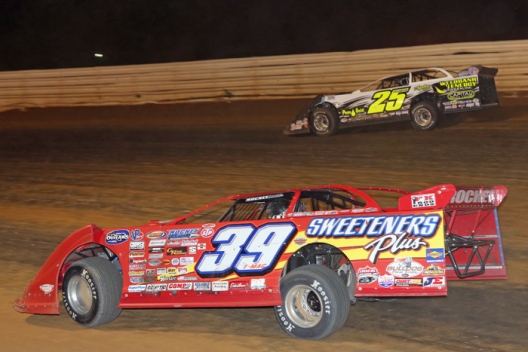 SELINSGROVE, Pa. – Aug. 30, 2014 – Tim McCreadie of Watertown, N.Y., charged forward from his sixth starting spot and overtook polesitter Shane Clanton of Zebulon, Ga., with five laps remaining in Saturday's Showdown on Sand Hill A-Main at Selinsgrove Speedway on his way to his third World of Outlaws Late Model Series victory of the season.

The 40-year-old McCreadie earned $8,650 in the first leg of the national tour's doubleheader at the historic central Pennsylvania dirt track.

McCreadie, the 2006 WoO LMS champion, pulled away through the final laps of the 40-lap race, crossing the finish line with an advantage of 2.121 seconds. His 28th career WoO LMS victory marked his first trip to victory lane at the sprawling half-mile oval.

"It took me a little while to get going, but once I did, I think being able to move around early starting where I did helped me later," said McCreadie, who chased down Clanton in his Sweeteners Plus Rocket Chassis as the two leaders raced through traffic during the race's closing laps. "I don't think Shane knew the track had changed that much, but it was a great night for Sweeteners and the whole program."

Clanton was denied his first WoO LMS victory of the season in settling for the runner-up finish ahead of 2011 series champion Rick Eckert of York, Pa., who was also looking to end a season-long winless streak on the series.

Two-time series champion and current points leader Darrell Lanigan of Union, Ky., roared through the field from the 23rd starting spot to finish fourth. Fresh off his 14th WoO LMS victory of the year during Friday's Working Man 50 at Lernerville Speedway in Sarver, Pa., Lanigan entered Saturday's race looking to tie his own WoO LMS single-season wins record. But he was dealt a setback when his Club 29 Race Car weighed in light at the scales following his heat race victory, forcing him to take a provisional starting spot for the A-Main.

Hometown driver Dylan Yoder started from the outside of the front row and challenged Clanton for the lead during the race's early stages. The 22-year-old local fan favorite faded slightly through the middle portions of the race, which ran caution free after one restart before a lap was completed. But he settled in during the closing laps and came home with a solid fifth-place finish.

After turning back Yoder during the race's opening laps, Clanton pulled to more than a straightaway advantage during the middle portions and appeared as though he may dominate the event. But McCreadie began cutting into Clanton's advantage after taking second on lap 19 and was assisted by Clanton's struggles in traffic.

McCreadie completely erased Clanton's lead by lap 30 and began looking to the low side of the high-running leader. Clanton switched his line to the low groove as he felt the pressure from McCreadie, but that wasn't enough to hold on to the point. With a strong run exiting turn two on lap 35, McCreadie pulled even with Clanton down the back straightaway, edged ahead at the line and completed the winning pass through turns one and two.

McCreadie easily pulled away in the closing laps, earning his 16th top-five finish in a season that's been solid but no quite up to his usual standards.

"It hasn't been a struggle because we've been running good, but I love winning," said McCreadie, who closed to 40 points behind Eckert in the battle for second in the WoO LMS championship standings. "This is a lot more fun. No matter what the paycheck is, it's always fun to be up front."

Clanton's runner-up effort in his Capital Race Car continued his recent improvement on the WoO LMS after a dismal first half of the season. He fell just short of a drought-ending victory, but gained ground in the WoO LMS points chase as he looks to catch Chub Frank and Eric Wells in the standings in hopes of salvaging at a fifth-place result in the season-long campaign.

Like McCreadie, Eckert charged toward the front during the second half of the race, especially in the final 10 laps as he made large cuts into the gap that separated him from the two leaders. But a slow start left his Rocket Chassis house car with too much ground to make up and a caution never appeared to reset the field.

"It looked like they were both dying and I was coming to 'em," Eckert said of his late charge. "I got such a terrible start. I got boxed in, started in that bottom and got myself pinched up and lost some spots. I got them back and got to looking at the score board. I see McCreadie up there and said 'Well, he's within distance.' I was like 'Ah man.' I just couldn't get them run down."

Matt Cochran of Williamsport, Pa., turned in another solid performance by a local racer with his sixth-place result, with Jeff Rine of Danville, Pa., in seventh. Morgan Bagley of Longview, Texas was eighth with Eric Wells of Hazard, Ky., and Dan Stone of Thompson, Pa., rounding out the top 10.