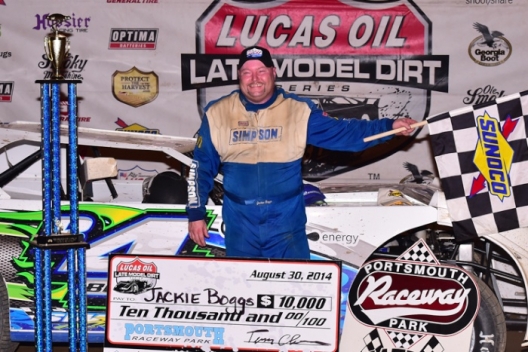 Third-running Boggs used a late-race restart to his advantage, charging to the front of the field on the high side with only 10 laps remaining for his third career Lucas Oil Series triumph. Third-starting Steve Francis of Ashland, Ky., finished second, with Jared Landers of Batesville, Ark., rounding out the podium in third. Eddie Carrier Jr. of Salt Rock, W.Va., finished fourth, while Bloomquist, who dominated most of the race, dropped back with fuel pressure issues to finish fifth.

“I didn’t know if I was going to get it going on or not,” Boggs said in victory lane. “We might have had our car cut a little wrong.  But I seen them start to skate a little bit and said, ‘Well, I’m going to move up a half a groove and let’s get it on.’ The car come in I was good.”

Boggs picked up a couple of wins at PRP earlier this year, and finished third in the Lucas Oil tour’s stop at the racetrack back in July.  His last series victory came at PRP in 2012 version of the same event. His experience at the racetrack worked to his advantage Saturday.

“We wasn’t really on the cushion, we was just in a groove above,” Boggs said after the race. “They wore the bottom plum out, Scott and Steve and them. Probably everybody else on it too. Once in a while, that track will bleed like that, right in the middle, and it’s fast.”

“I thought he had a right-rear going down because he run in there and kind of laid over and got it a big push,” Francis said of Bloomquist. “I actually thought he was going to push across the racetrack … that’s why I kept committing to the bottom and then I see Jackie out there and there was no way to get out there then.

“He picked the right lane and I picked the wrong lane, so I guess it was better to be running third than it was to be running second at that point. But congratulations to him. He took a chance on going to the top and it paid off for him.”

Landers advanced from the sixth starting spot to finish third. He said he was happy with his podium finish.

“It was a lot of fun out there,” Landers said after the race. “Jackie, he sure found a good line up there at the top … I believe he out-drove everybody out there tonight. I got behind him a couple times, and he couldn’t find it all the way up there and he’d get sideways, and I’d have to break check.

“I thought we was going to wreck the field, but he ended up winning the race. I’m just lucky to be in the third spot here. I don’t know if it’s a racy racetrack, but he showed me a line that made me pass a couple more racecars. You had to do it and you had to get all you could get.”