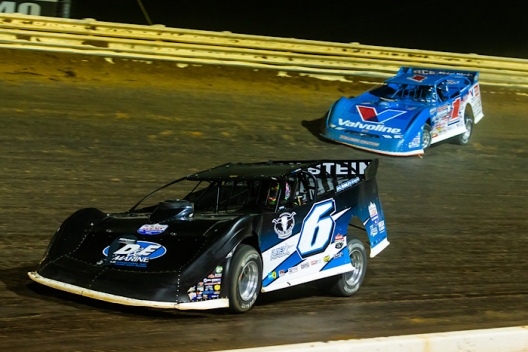 PORT ROYAL, Pa. — Kyle Larson’s learning curve in Late Models proved to be as short as his biggest fans expected.

Making his second career start in the full-fender division, the open-wheel superstar from Elk Grove, Calif., led all 50 laps Saturday at Port Royal Speedway for a $15,000 victory in the Rumble by the River finale on the Lucas Oil Late Model Dirt Series.

“This is probably one of my biggest wins ever of my career, just a lot better weekend than I thought,” the 28-year-old Larson said in victory lane after turning some celebratory donuts in his K&L Rumley Enterprises No. 6. “I thought we’d be OK, but I didn’t know, and I definitely wasn’t expecting to win a race. To climb into something that’s way different than I’ve ever been in, and to have success and be with a great team, it just means a lot.”

After finishing fifth Thursday at Port Royal in his Late Model debut, the front-row starting Larson on Saturday turned back restart challenges and a mid-race bid by Brandon Sheppard in adding yet another achievement to his resume of his success in NASCAR, sprint cars, midgets, Silver Crown cars and more.

“I love driving race cars, and I’m very, very fortunate, like I’ve said all weekend, just to get to race for awesome car owners,” Larson added. “Kevin Rumley, Lee Roy Rumley, I just can’t thank them enough for giving me the opportunity. All their sponsors and supporters, it’s a small team, and we got it done. It’s really cool.”

The pole-starting Sheppard, of New Berlin, Ill., finished 0.499 seconds behind Larson with Gregg Satterlee of Indiana, Pa., a four-time winner this season at Port Royal in third. Chris Ferguson of Mount Holly, N.C., rallied from his 16th starting spot to fourth and Thursday’s Port Royal winner Tim McCreadie of Watertown, N.Y., rounded out the top five.

Former series Rookie of the Year Hudson O’Neal of Martinsville, Ind., ran among the leaders early, including in second from laps  11-17, but he fell from contention with a lap-29 flat tire.

In battling on a slick surface from top to bottom — at a track where he captured sprint car victories earlier this season — Larson rode the high groove most of the way in fighting off any challengers.

"That was a tough race. I didn’t really know where to run,” Larson said. “Sheppard showed his nose that one time earlier in the race, and I wasn’t sure what to do. We got a caution and they told me to move up in (turns) three and four and I never saw anybody after that.

After mid-race restarts, “I would run hard for a couple of laps, and then try and back my pace and my wheelspin down just a little bit, to try and take care of my tries. I’m really new to this, obviously, and everything I hear about Late Models is every race is a tire game,” he added, “so I just tried to take care of my stuff and keep it out of the wall. The curb was getting really big in (turns) one and two.”

Sheppard turned up the heat on Larson near midway after regaining second from O’Neal, but lacking a long stretch of green-flag racing in the middle stages, he ended up falling behind by as much as three seconds with 15 laps remaining. He drew closer as the frontrunners entered traffic late in the race, but never close enough to again make a serious bid at the lead.

“I was good on the longer runs. I couldn’t really take off very good on the restarts, and we had a bunch of restarts there, so that was definitely not helping me,” Sheppard said. “Congratulations to Kyle. He did a really good job. He does a good job in everything he drives, obviously. We tried our best out there. There was a few things I would’ve done different if I could go back again, but all in all, definitely I can’t hang my head with second place.”

Satterlee briefly swapped the second spot with Sheppard with 20 laps remaining, but that helped Larson build a margin that was too much to overcome. He congratulated the winner “for beating everyone up here in the first weekend he’s ever raced a Late Model.

“We had a really good car. I survived the restarts, they got a little sketchy, and really when we got into lapped traffic there, we’d just caught ’em, and I thought all three of us got back to each other. I wished we could’ve gotten (into a) little more lapped traffic racing, but all in all, the car’s in one piece.”

The feature was slowed by five cautions, none for serious incidents and four near halfway. The first yellow appeared on the 10th lap when Colton Flinner came to a stop in turn four with right-rear damage.

Four yellow flags came out between laps 23-29 for driveline failures for Jonathan Davenport (lap 23) and Bobby Pierce (lap 23), making a guest appearance in Pancho Lawler’s car. Jason Covert slowed in turn three on the 27th lap and on lap 29 for O’Neal’s flat.

Notes: Larson entered the weekend with 34 open-wheel victories this season worth more than $400,000. … Packer’s Concessions added $1,000 to Larson’s earnings, a bonus offered only if he won. … Scheduled to start 12th, series points leader Jimmy Owens had to start on the tail because his deck height was too high in prerace inspection. He ended up seventh. … The track announced next season’s Rumble by the River will double the winner's share of the finale at $30,000 on the Lucas Oil circuit; the event is scheduled for Aug. 26-28, 2021.