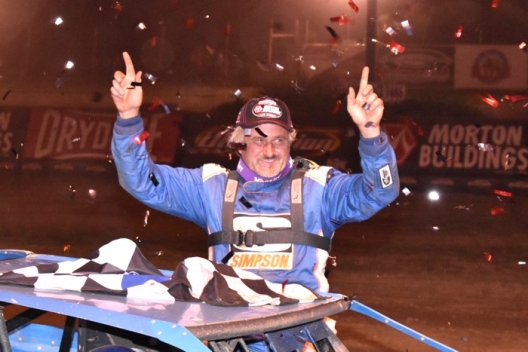 HAMMETT, Pa. (Aug. 22) — Dennis Erb Jr. of Carpentersville, Ill., ruined what might have been an epic party Saturday at Eriez Speedway.

But denying Boom Briggs of Bear Lake, Pa., a career-first World of Outlaws Morton Buildings Late Model Series victory on his home turf wasn’t a concern for Erb. He just breathed a sigh of relief over finally having a chance to enjoy his own lower-key celebration after capturing the tour’s 50-lap feature.

Just over six months after losing an apparent WoO victory Feb. 12 at Volusia Speedway Park in Barberville, Fla., because he was penalized to last place for failing to report to postrace technical inspection, Erb exorcised those demons in satisfying fashion. He outdueled the red-hot Brandon Sheppard of New Berlin, Ill., for second and then overtook Briggs, the race-long pacesetter, for the lead on lap 41 en route to a $10,000 triumph in his self-owned XR1 Rocket machine.

Erb, 47, snapped a nearly three-year and 82-race winless drought on the WoO tour, winning for the first time since he claimed the World Finals finale on Nov. 4, 2017, at The Dirt Track at Charlotte in Concord, N.C. It was his sixth career checkered on the national tour that he joined as a regular in ’19.

The 49-year-old Briggs crossed the finish line 3.081 seconds behind Erb after leading the race’s first 40 laps, settling for a runner-up finish that matched his career-best WoO run. He drove the XR1 Rocket car — still carrying the No. 1J rather than his familiar No. 99b — that he recently purchased from Jake Finnerty and debuted two nights earlier in the WoO stop at Lincoln Speedway in Abbottstown, Pa.

Sheppard, 27, finished third in the Rocket Chassis house car, snapping his two-race WoO win streak. The race’s fourth starter swapped second place with Erb on several mid-race restarts but was over 4 seconds behind the victor at the finish.

Completing the top five was WoO rookie Ashton Winger of Hampton, Ga., who earned hard-charger honors with his march from the 15th starting spot to a fourth-place finish, and Alex Ferree of Saxonburg, Pa., who recorded his first top-five result in WoO competition since 2006.

Erb started from the pole position but was outgunned for the lead at the initial green flag by Briggs, who shared the front row. Briggs proceeded to maintain firm control as Erb settled into a back-and-forth battle for second with Sheppard.

“To sit there battling two-wide there let (Briggs) get out front a little bit,” Erb said of his hard-fought tussle with Sheppard.

With Sheppard unable to keep his car stuck to the inside lane, Erb finally secured second place on lap 33. The veteran Midwesterner then turned up the heat on Briggs following the feature’s final restart on lap 34.

“The longer the race was going, the better I was,” Erb said. “I had a little harder tire on than them guys had on on the front, and I knew the longer that we were going the better the car steered and I could charge the corner harder.”

Erb began peaking to Briggs’s inside on lap 38. Two circuits later he found room underneath Briggs off turn two, filled the gap and was in front for good as lap 41 was scored.

“I could see he was just a little loose there,” said Erb, who tallied his seventh top-five and 16th top-10 finish in 32 WoO starts this season. “He left a lane open and I was able to capitalize on it.”

The remainder of the distance was a runaway for Erb, who built a full straightaway edge by the time the race concluded.

“The first time here, we had a good run,” said Erb, whose expected first-ever visit to Eriez last year was dashed by rain that washed out the scheduled WoO program. “Good racetrack to race on, you could race all over it. I’m looking forward to the next one.”

Briggs came ever-so-close to pulling off a career-first WoO triumph that would have no doubt electrified an Eriez crowd that included many of his family, friends and fans.

“I just got my left rear (tire) I think too cold there,” Briggs said. “Dennis had a harder right-front on and I just couldn’t steer that good. I got tight after that last caution.

“I seen Dennis underneath me (on lap 41). He had the line and he’s raced me clean all year … I wasn’t turning across his nose.”

Briggs paused, and then added of the famously hard-to-excite Erb, “Hat’s off to Dennis. It might actually get him to smile now.”

Finishing second certainly was a heartbreaker for Briggs, but he still had reason to smile. Briggs and his crew put in a full day of work in the shop after making the 5-hour haul overnight haul from Friday’s event at Williams Grove Speedway in Mechanicsburg, Pa., in order to ready his Rocket mount, which sustained significant damage in Thursday’s action at Lincoln.

“There was way too many damn cautions,” Briggs said of an A-main slowed by eight caution flags, all of which flew between laps 15 and 34. “But hell, at 9 o’clock this morning there wasn’t even a rear clip on this car.

“So hat’s off to my crew. Shane (Winans), he’s there with me every day and I couldn’t do it without him. Chub (Frank, Briggs’s cousin who finished ninth), my mom at home, my brother’s here tonight, my whole family. My wife didn’t come, but maybe she’s saving it for that win.”

Sheppard entered the finale of the three-race WoO swing through the Keystone State having led every lap of the features at Lincoln and Williams Grove, but he couldn’t duplicate that strength at Eriez.

“We’ll shake this one off and get back to work.”

Notes: Erb’s five previous WoO triumphs came in 2007 (Beaver Dam, Wis., and Brownstown, Ind.), ’14 (Volusia and Pevely, Mo.) and ’17 (Charlotte). … The only previous victory on Erb’s performance record this season came in July 26’s DIRTcar Summer Nationals feature at Clarksville (Tenn.) Speedway. … Ricky Weiss of Headingley, Manitoba, salvaged an eighth-place finish after starting 18th and finding himself involved in two caution-inducing incidents (turn-two spin on lap 17, tangle with John Volpe on lap 18). … The feature’s most significant accident came on lap 34 with sixth-place Darrell Lanigan of Union, Ky., slowed in turn three and was hit by eighth-place Dave Hess Jr. of Waterford, Pa. … Driving his own familiar No. 32, Bobby Pierce of Oakwood, Ill., slowed on lap 15 while running inside the top 10 and did not continue. … Scott Bloomquist of Mooresburg, Tenn., used a provisional and finished 19th in his first-ever Eriez start. … Max Blair of Centerville, Pa., had a short night at one of his home tracks, scratching from further action after retiring from his heat race with a broken driveshaft and transmission. … Other non-qualifiers: Michael Norris, John Lobb, Greg Oakes, Dave Lyon, Breyton Santee, Parker Martin, Bob Dorman, Khole Wanzer, Bump Hedman and Bryce Davis.