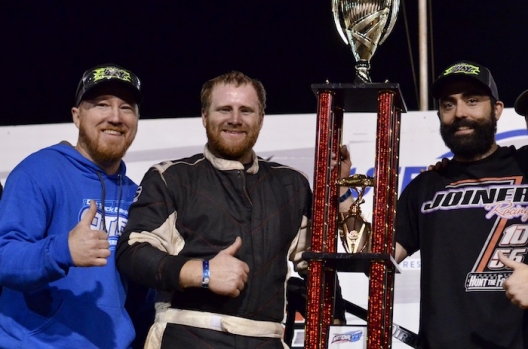 PHENIX CITY, Ala. (Nov. 8) — Joseph Joiner had just one thing on his mind when he saw leaders Jason Hiett and Parker Martin come together in front of him rounding the final turns in Sunday’s 46th National 100 at East Alabama Motor Speedway.

“Just try not to hit ‘em,” Joiner said with a hearty laugh.

The 27-year-old driver from Milton, Fla., did just that, ducking low off turn four as Oxford, Ala.’s Hiett spun to the top of the 3/8-mile and Milledgeville, Ga.’s Martin skidded high and surging ahead to beat the teenage Martin to the finish line for the $15,000 victory by a slight 0.791 of a second.

“I hate it for Jason and Parker there,” Joiner said on the winner’s stage while celebrating the most prestigious and richest triumph of his budding career. “They race hard, and (tangling) right there in the last corner ain’t no good, but we’ll certainly take it.”

The dramatic conclusion capped a marathon, caution-filled race that saw tires wear excessively on a hard, rubbered track surface. Pit road was a busy place throughout the distance with drivers stopping regularly for tire changes, including Joiner, who pulled in to replace his Hoosier 70-compound right-rear on lap 52 while running fifth.

Outside polesitter Dale McDowell of Chickamauga, Ga., a two-time National 100 winner, led the feature’s first 82 laps but began to fade late in the race as his Bloomquist Race Car’s right-rear tire gave up. He couldn’t repel the 16-year-old Martin, who after pitting several times midway through the century grind had the fresh rubber needed to sail by McDowell for the top spot on lap 83.

Seeking his first-ever Super Late Model win, Martin, the son of Cochran (Ga.) Motor Speedway promoter Chris Martin, drove off to a full straightaway edge before a caution flag flew on lap 93 for third-running Hiett’s flat right-rear tire. Another caution, on lap 98 for Steve Roberts of Jesup, Ga., slowing, set up a green-white-checkered finish with Hiett back up to third behind Martin and Joiner.

Hiett immediately overtook Joiner for second when the race restarted and caught Martin on the backstretch. When Martin slipped high in turn two on the final lap, Hiett cleanly shot by on the inside to make what appeared to be a winning pass.

Entering turn three, however, Martin made contact with Hiett’s left-rear corner, sending Hiett spinning out of contention. Martin lost traction and slid up the track in turn four, opening the door for Joiner to steal the race along the inside of the track.

Martin regained enough speed to cross the finish line second in his first-ever National 100 feature start, nipping Christin Hanger of Winchester, Tenn., but Martin was later disqualified for the contact with Hiett, moving Hanger into the runner-up spot in the final rundown. With Martin's disaqualification, Ahnna Parkhurst of Evans, Ga., and Rodney Martin of Parkersville, Ga., finished third and fourth, respectively, after also pitting for tires during the race.

McDowell, 54, settled for a fifth-place result after his fading tire dropped him to fifth before he pitted for a new shoe on lap 98. Hiett, who won the 44th National 100 in January 2019 after the ’18 edition was rescheduled and reduced in length and purse, was a heartbroken seventh-place finisher, the last driver on the lead lap in a race in which just 10 cars were running at the checkered flag.

Joiner’s victory came in his career-first National 100 feature appearance. He drove a smooth, steady race, advancing forward from the 17th starting spot during the race’s first half and quietly rallying from his mid-race pit stop.

When Joiner found himself sitting second in his family-owned Capital Race Car for the final restart on lap 98, he knew he at least had a chance at an upset win. He figured he would need a bit of help, though — and he got it.

“Parker, he’s kind of wild, and he was blistering his tire and I didn’t know how long it had been since he had pitted and got a tire,” said Joiner, who was felled by a broken driveshaft in a Saturday qualifying heat. “I know we went (52 laps) on our first one.

“I seen, what was it, nine to go or something, and I’m like, ‘Well, if we blow out from here, we’re gonna try to win this thing,’” he added. “We didn’t quite have the car to win I think. We were pretty good — good enough, I guess.”

Joiner was overjoyed by the turn of events that propelled him to a head-turning victory. It topped his previous high-water performance: a $9,000 sweep of the Labor Day Weekend 2019 Southern All Star Series doubleheader at his hometown’s Southern Raceway.

“I can’t put that into words,” Joiner said when asked to describe his emotions. “I’ll go ahead and tell you, there’s no way I can even try. This is unbelievable, and I got a lot of folks to thank for it, that’s for sure.”

Joiner viewed his breakthrough run as a sign of even better days ahead for him and his team.

“Man, we’re here to stay,” Joiner said. “This is a statement for us, a big confidence booster for our team. We’ve had some rough luck this year. Some things have went our way, some things haven’t. It’s just racing. This is certainly a big help, and we got plenty of places to spend the money, that’s for sure.”

While Joiner posed for pictures on the EAMS winner’s stage, just yards away sat Martin’s car surrounded by a huge throng of people. The teenager stayed in the cockpit as angry members of Hiett’s team and other observers showed their displeasure with the final-lap incident. Martin’s machine was eventually pushed to his trailer and he remained in his seat for several more minutes as the volatile situation calmed down.

Notes: Joiner became the second Florida driver to win the National 100, joining 1984 victor Buddy Boutwell of Lynn Haven. … Runner-up Christian Hanger called the race “a really big tire game this year” and credited his patient approach from bringing him a podium placing. “It’s better to be smart than good sometimes,” he said. … Polesitter Sam Seawright of Rainsville, Ga., challenged McDowell for the lead midway through the feature and actually surged ahead after contact with the leader on a lap-52 restart, but a caution moments later for third-place Dalton Cook’s spin in turns three and four kept McDowell in front. Seawright then retired during the caution period due to a broken oil pump belt. … Hampered by a loss of power steering, Cook went on to finish 10th. ... Brandon Overton of Evans, Ga., was running within striking distance of McDowell in second when he pulled out with mechanical trouble on lap 24. … Dennis Erb Jr. of Carpentersville, Ill., was running third when mechanical woes eliminated him on lap 69. … Joseph Brown of Columbus, Ga., spun into the inside wall on the homestretch on a lap-34 restart while holding sixth place; he was black-flagged moments later after he bumped Steven Roberts’s stopped car on the track. … Roberts had an eventful race, slowing to bring out caution flags on laps 52, 54 and 98 and also triggering a fourth yellow on lap 81 when he slid over the turn-two bank. He finished sixth in a race that saw him briefly climb as high as second.

McDowell of Chickamauga, Ga., had the best night of the three heat winners thanks to the $3,000 Zaxby's Pole Aware he earned for being the fastest of 22 qualifiers during the night's time trials session. He went on to win the night's second heat race unchallenged over runner-up Dalton Cook of Columbus, Ga.

Seawright of Rainsville, Ala., held off Brandon Overton of Evans, Ga., to claim the first of the night's heat races, while Brown of Columbus, Ga., led all the way in the third and final heat to win over Jason Hiett of Oxford, Ala.

The three heat races ran mostly without incident. The only caution during any of the 10-lap prelims came in heat three when Patrick Michel of Bell Chasse, La., spun with two laps remaining. In the second heat, Joseph Joiner of Milton, Fla., was running third when he broke a driveshaft on the final lap and coasted to a sixth-place finish.