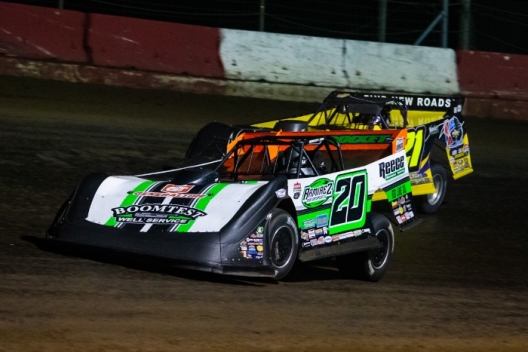 LOCUST GROVE, Ark. — Jimmy Owens completed his dominating Comp Cams Topless 100 on Saturday with a $40,000 victory, but not before a hometown Hall of Famer threw a scare into him on the final lap.

The Lucas Oil Late Model Dirt Series points leader from Newport, Tenn., briefly fell behind for the first time in the race when Moyer edged past exiting turn two on lap 100, but when Moyer got into the concrete wall on the backstretch, The pole-starting Owens breathed a sigh of relief in finishing off his flag-to-flag victory for his third career victory in Batesville Motor Speedway’s biggest event.

His series-leading 10th victory of the season was his richest and capped a weekend that saw Owens lead 158 of 160 laps of three feature races.

“My hat’s off to the crew. They kicked butt all weekend and we had a great car all weekend,” Owens said in victory lane. “Things are just jiving well between everybody … it’s just a good team right now.”

Moyer’s last-lap scrape with the wall dropped him to fourth with Earl Pearson Jr. finishing second, 1.452 seconds behind Owens. Despite a mid-race pit stop to replace deflating tire, Tim McCreadie of Watertown, N.Y. — Thursday’s winner after overtaking Owens with two laps remaining in a 30-lap prelim — was third followed by Moyer, who started outside the ninth row, and Dale McDowell of Chickamauga, Ga.

Most of the race race was relatively uneventful, but when the four-time race winner Moyer took second from Pearson on lap-64 restart, he eventually began closing in on Owens in the late stages, pulling right up on the leader’s rear deck with 17 laps remaining.

Continuing to stalk Owens in traffic, Moyer was a tenth of a second back at the white flag and “let it all go for broke there off of (turn) two” on the final lap. He edged ahead of Owens briefly as the frontrunners raced behind the slower car of Tyler Bruening, but with the big crowd anticipating the hometown hero’s move, Moyer got hung up on the backstretch fence to allow Owens to slip away.

“It rubbered up there towards the end and got single-file, but Billy was fixing to have one heckuva finish right there, getting up next to Jimmy,” Pearson said. “I guess he got into the back straightaway wall, but that was going to be one of a heckuva finish.”

Owens caught a glimpse of Moyer on the final lap, but just as soon as he saw him he was back behind the race-long leader.

“I just didn’t know where to go. It looked like was nobody was passing nobody,” Owens said. “Then he snuck around me and he was by me down there and I guess he got a little push off the corner there and tagged the wall a little bit.

“I was mainly concerned about the guys that had (flat tires) early and were able to come in. You see Timmy (McCreadie) came in with a flat and came all the way back to the front there. So the new tires was going to be a big concern toward the end — and it definitely was.”

Moyer took his best shot in trying to win his first Topless 100 since 2005.

“I was working him and working him for a long time, and when you’re leading like that, you don’t know where to go … I had a good car there and I just kept kind of biding my time. I got a little too tight right there at the end,” Moyer said. “Anyway, I made a run for it that last lap there, and I was ahead of him a little bit and I should’ve just cooled my jets off turn two there. The 16 car was messing us up. I thought I was going to try and go by the outside of him, and I should’ve just lifted and followed him down the back straightaway. But I figured that would let Jimmy get a run under back underneath me going into (turn) three, then on the last lap, I kinda knew how that might turn out.”

The 62-year-old Moyer said he came to the track “with high expectations, for sure, right here at home, and we unloaded not near (as good) I thought we would. We just never gave up. These guys that work for me, I can’t say enough about ’em. They just worked their hearts out and I did, too.

“We’ve had every corner of this off several times through the weekend, and finally we got it pretty good there. I knew it’d be good at the end when the track (surface changed). At the beginning, heck, it was not very good there for five or 10 laps. I was about to pull in. But anyway, we soldiered through.”

Pearson got the benefit of Moyer’s last-lap struggles in posting a $20,000 finish for his richest paycheck of the season.

“All in all, we started sixth and to come home second with the Lucas Oil car here, Black Diamond Chassis, it’s a good race for us,” he said. “We kind of moved around throughout the race there and Billy got me on that restart there, and we just had to follow one line. But all in all it was a good night for us.

“Everybody knows Jimmy’s on fire right now. Just to come home second to him, I guess you gotta feel good about that, because he’s winning everything right now.”

Forced to pit midrace — the team ended up changing both rear tires — McCreadie stormed back into contention, but his car was spent in the final laps.

“We didn’t have any plan to pit. I got together with a car and it pushed the body into the tire and must’ve cut it down,” McCreadie said. “I probably should’ve pitted the yellow before, but when we went green, I was kind of laying on the right-rear and popping a wheelie. Dale McDowell helped me out. I kind of weaved around on the next yellow and he told me what was happening.

“For a little while, when I was coming through, I thought we’d be really good, and I just overabused the right rear. This place is so hard on right rears so when I got up to where I was at, I had nothing for ’em.”

The race was slowed by four cautions, the most significant when fourth-running Shannon Babb spun in turn two trying to get under Earl Pearson Jr. on lap 54.

Other cautions appeared for a Timothy Culp flat (lap 29), Kyle Bronson’s lap-48 spin after contact with Tyler Erb (lap 48) and Neil Baggett’s flat tire (lap 50). Shane Clanton was running sixth on lap 63 when he slowed and pulled pitside with a deflating right-rear tire.

Jimmy Owens of Newport, Tenn., who tops the list of 49 drivers with 500 points after two days of preliminary features, will start from the pole, with Tim McCreadie of Watertown, N.Y., alongside on the front row. Owens is seeking his third Topless 100 victory, while McCreadie is chasing his second. Brandon Overton of Evans, Ga., starts third as he chases his second crown jewel victory of the season and first-ever Topless 100 win, while 2004 Topless 100 winner Dale McDowell of Chickamauga, Ga., starts fourth.

The first eight rows of Saturday’s feature lineup were set via points that drivers accumulated through two rounds of 30-lap preliminary features. Rows 9-11 will be set through a pair of consolation races, with row 12 reserved for Lucas Oil Late Model Dirt Series provisionals and for 13 for two Comp Cams Super Dirt Series provisionals.