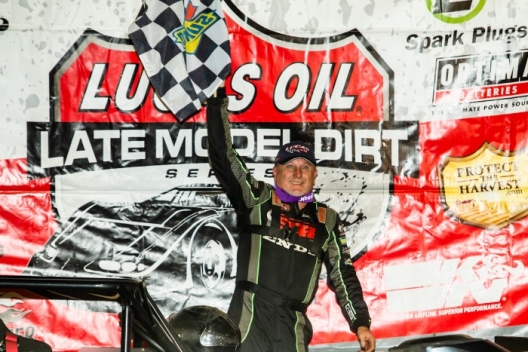 LOCUST GROVE, Ark. — The habit of dominating races — leading 88 percent of the laps in the last three Lucas Oil Late Model Dirt Series events — without winning was getting a little tiresome for Jimmy Owens.

So instead of watching one of his competitors sneak by late for a victory again, the Newport, Tenn., driver finished a race successfully Friday at Batesville Motor Speedway for a $5,000 preliminary victory on Comp Cams Topless 100 weekend.

“Hope we can keep this rolling for tomorrow night,” said Owens, who will chase the $40,000 winner’s share of the Topless 100 purse in Saturday’s weekend finale from the pole position.

The series points leader started on the pole and led all 30 laps, turning back a few serious second-half challenges from Brandon Overton of Evans, Ga., for his series-leading ninth victory of the season.

Overton finished 1.186 seconds behind at the finish with reigning series champ Jonathan Davenport of Blairsville, Ga., in third. Shanon Buckingham of Morristown, Tenn., and Kyle Bronson of Brandon, Fla., rounded out the top five.

Owens was comfortably ahead the first half of the race, but Overton closed in amid traffic to cut the leading margin to under three-tenths of a second just past halfway.

When the slower car of Timothy Culp was holding up Owens in the final laps, Overton cut the margin to his lowest of the race — 0.149 seconds — but couldn’t find a way past.

When the race’s lone caution appeared on lap 26 — Culp blew out a right-rear tire — Owens had clear track that allowed him to secure the victory.

“The track had gotten a little bit of rubber and stuff, so I didn’t know (what to do). The track’s notorious for being able to move up a lane a little bit right there, and it rubbered through the middle a little bit,” Owens said. “But it looks like it was primarily on the bottom and I was afraid to step out a bit. But that caution played in our favor and we ended up with the win.”

Overton ventured into a higher groove a few times looking for a way around Owens, but it never worked.

“I was trying. You now how it is, it’s pretty narrow out there right now, but maybe they’ll work on it a little bit tomorrow and we’ll have a little better racing surface,” Overton said. “We’ll take it. We had some bad luck last night in the feature and didn’t run very well … I’m happy. Jimmy’s been good all year and we’re right there with him. We just gotta get a little bit better. We’ll work on it tomorrow and see what we’ve got.”

Davenport, racing in the hometown of his car owner Lance Landers and several nearby sponsors, improved his car, but not as much as he’d have liked.

“We’re trying some new things and it seemed it was were pretty good. I think we just need to go a little bit more,” he said. “As far as our race team, we’re definitely getting better, I think. We just need to keep going in the direction we’re going. We kind of got lost there midseason, and it was probably pretty much just my fault for not communicating well enough with my team. But thanks to Jason (Durham) and Tyler (Breashears) and Matt (Langston) and everybody that works on this thing. We couldn’t do it without them.”

The podium finishers know Saturday’s long-distance finale will require awareness of track conditions throughout the night.

"It’s definitely going to be a different animal,” Owens said. “Usually they prep the track a little bit different, and it won’t have near as many laps on it. We’ll start out and hopefully end up really well.”

After 30 laps Friday, "we’re almost bald here on tires,” Overton said. “Like I said, if he works on the track a little bit more tomorrow, maybe (the surface) will last a little longer. I think he usually does, so we’ll just see what we’ve got.”

“I’m just worried about tire wear, really. We already seen one guy tonight blowed out on lap 26 or whatever, so we’ve gotta go 100 tomorrow,” he said. “My tire’s not looking too good and I don’t think Jimmy’s is, either, so we’ll just have to wait and see what it does. It may be a pit stop game tomorrow."

Notes: Owens won his 73rd career Lucas Oil Series feature. … All 24 starters were running at the finish with only two a lap down. Culp’s lap-26 caution was the only yellow in two nights of preliminary features.

Jimmy Owens of Newport, Tenn., starts from the pole for the second night in row. … Thursday winner Tim McCreadie of Watertown, N.Y., starts ninth. … Billy Moyer Jr. of Batesville, swapped motors in his Capital Race Car on Friday morning. Moyer said the engine he used on Thursday’s fifth-place finish had about 1,300 laps on it. … Timothy Culp of Prattsville, Ark., and Wendell Wallace of Batesville are both using modest open trailers this weekend. “It’s all we need,” said Culp, who recently sold his enclosed trailer and is waiting to take delivery of a used S&S stacker that he purchased. … Wallace is driving one of Raymond Merrill’s cars in search of his second Topless 100 victory. …. After he had a flat in his heat, Chris Madden of Gray Court, S.C., rallied from sixth to win his consolation race. … Tyler Bruening of Deborah, Iowa, rallied from eighth in his heat to fourth, then finished second in his consy to grab a starting spot. Bruening had to go to a backup car after qualifying after he pounded the tire barrier on the outside of turn four during qualifying. … Mike Marlar of Winfield, Tenn., left on Thursday after a pair of wrecks damaged his new Longhorn. … Jeff Roth of Bentonville, Ark., went to the hospital Thursday night after his hard crash in his consolation race. Roth was complaining of his back hurting. Jeff’s brother Randy said Jeff got a shot for his back and was resting in the team’s hauler Friday. Roth’s Bloomquist Race Car was heavily damaged in the crash and will likely need to be clipped according to Randy Roth. … Shanon Buckingham, Ricky Thornton Jr., Mason Oberkramer, Tyler Bruening and Morgan Bagley are drivers who advanced to Friday’s feature after failing to make the main event on Thursday. … Kyle Beard, Neil Baggett, Wendell Wallace, Logan Martin and B.J. Robinson were in Thursday’s feature, but missed the cut on Friday.

For the second night in a row, Jimmy Owens of Newport, Tenn., cruised to victory in the first heat. Owens, who outran Dale McDowell to win the heat, predicted Friday’s feature would be won from the middle groove up. “It looks like it’s gonna be around the top and the middle. We’ll just have to maneuver wherever we can to get the win I guess,” said Owens. … Shanon Buckingham of Morristown, Tenn., outdistanced Thursday’s feature winner Tim McCreadie, of Watertown, N.Y., to win the second heat. … Ross Farmer of Glenwood, Ark., took a wild ride after slamming into the turn-one wall on the opening lap of the second heat. Farmer slid into the wall, caught it hard with his right rear and then flipped several times before coming to rest on all four tires. Farmer signaled that he was OK after removing his helmet. … Jonathan Davenport of Blairsville, Ga., won the third heat comfortably ahead of Shane Clanton. … Chris Madden of Gray Court, S.C., was in a transfer spot in the third heat, but a flat tire with two laps to go slowed his process and he faded to fifth. … Brandon Overton of Evans, Ga., outran Spencer Hughes to capture heat four. … Kyle Bronson of Brandon, Fla., rallied from third to win the fifth heat. Bronson said his team has been searching for speed all weekend. “We’ve been working our butt off changing everything every time we hit the racetrack,” said Bronson. … Earl Pearson Jr. of Jacksonville, Fla., got the jump on polesitter Billy Moyer Jr. and went on to win the final heat. EPJ was followed by the Batesville contingent of Moyer Jr., Billy Moyer and Wendell Wallace. … Among drivers needing to transfer from a consolation race on a night when no provisionals are given: Devin Moran, Tyler Erb, Madden, Tyler Bruening, Wallace, Neil Baggett and Shannon Babb. Each of those drivers were in Thursday’s feature.

Jimmy Owens continued to show the way with good early speed as the Newport, Tenn., driver and Lucas Oil Series points leader set the overall fast time. Owens was the 13th driver to hit the track in Group A, stopping the clock at 14.193 seconds. Shanon Buckingham of Morristown, Tenn., was next at 14.234 and reigning series champion Jonathan Davenport of Blairsville, Ga., was third at 14.288. They’ll start on the pole of heats one, two and three, respectively.

Tyler Bruening of Deborah, Iowa, went off track during qualifying, slamming the tire barrier in turn four. Bruening limped his Capital Race Car to the pit area as the team scurried to get out a back-up car. Josh Richards of Shinnston, W.Va., spun off the track during in the same spot, but missed the tire barrier.

Chris Madden, the 2019 Topless 100 winner who is making his debut for North Carolina-based Rum Runner Motorsports this weekend,vcould become the first back-to-back Topless 100 winner. He finished a quite 12th on Thursday.