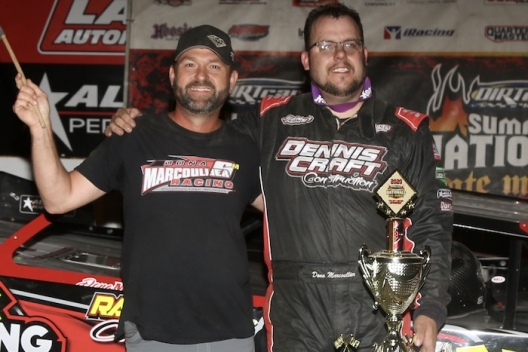 Marcoullier, 34, of Houghton Lake, Mich., led the final seven laps of Friday's DIRTcar Summer Nationals feature at Tri-City's 3/8-mile oval to claim the first series victory of his career while also becoming the first Michigan driver to win on the popular Midwest series in more than a decade.

The $10,000 triumph isn't Marcoullier's first five-figure victory, but to him it's the biggest.

"This is the highlight of my career," said Marcoullier, who scored the eighth win of the season for his Bubber Patrick-backed team. "We've got 200 feature wins in 20 years of racing and we've won $10,000 before, but this is the best thing that's ever happened to me. This shows how hard we work."

He certainly had to work hard for it Friday night.

Starting from the eighth position, Marcoullier steadily moved forward through the first half of the 50-lap race and took second from Ryan Gustin just after the midway point. He closed in on race-long leader Frank Heckenast Jr. amid heavy traffic just before lap 40 and used the bottom groove to get a run on Heckenast when he slipped up exiting turn four on lap 43.

Marcoullier completed the winning pass the following lap and pulled away for the victory. He crossed the finish line 1.015 seconds ahead of fifth-starting Rusty Schlenk of McClure, Ohio. Gustin of Marshalltown, Iowa, finished third, while Heckenast of Frankfort, Ill., faded to fourth at the finish. Series points leader Brian Shirley of Chatham, Ill., finished fifth and clinched his third straight series championship with one race remaining.

Racing at a track where he had won four of six events on the season and coming off a third-place finish with the Summer Nationals at Thunderbird Speedway in Muskegon, Mich., on Thursday, Marcoullier had high hopes for Friday's race. His runner-up heat race finish gave him the eighth starting spot for the feature. But even starting in the fourth row with a slew of good cars ahead of him, Marcoullier was still optimistic about his chances.

"With the way we've run here and as good as our equipment is, I knew we had a shot even starting back there," Marcoullier said. "This place doesn't get a cushion or nothing. It just gets slick. You can't spin a tire. It's all momentum and you don't have nothing to lean on. We've been really good when the track's like that here, so I knew we had a shot."

After starting fifth, Schlenk slipped back to sixth on the start of the race and was just getting going when the race's only caution waved on lap 16. From there, he followed Marcoullier to the front, but he didn't have the speed to challenge for the win in the closing laps.

"We went hard on the right-rear and I knew I just had to maintain at the beginning. That caution fell at the right time because the tire had just lit," said Schlenk, who has finished in the top five in three of the past four Summer Nationals races. "We got rolling there on the bottom after the restart and picked off a few. This place is just all about momentum. You just got to keep you nose clean and keep pace."

Gustin was one of the few drivers to run the track's high groove for the entire race. Even as the track began to lock down in the bottom during the closing laps, he stuck with the top. But he couldn't find enough traction to keep pace with the leaders.

"I knew the bottom of the racetrack was getting faster the longer it went, but I wasn't very good down there early. I figured my best bet because I had a hard tire on was to ride around the top and try not to get passed," said Gustin, who finished in the top three for the second night in a row. "You get in the line on the bottom and you're gonna run third either way. I figured we'd give it hell up top and we did, but we came up short."

The series moves to Merritt Speedway in Lake City, Mich. on Saturday for the final race of its 2020 campaign. Merritt replaces Oakshade Raceway in Wauseon, Ohio, the traditional site of the season-ender, as the tour's final stop due to coronavirus restrictions.

Notes: Marcoullier scored his eighth victory of the season. He's now won five races at Tri-City and has wins at Winston Speedway and Merritt Speedway. ... Shirley's third straight series title is his fourth career championship; his first championship came in 2012. ... Jeep VanWormer was the tour's most recent winner from Michigan. He last series victory came on July 11, 2010 at Quincy (Ill.) Raceway. He won three other times that season and has 15 total career victories. ... The only other time a Michigan driver has won a series race in Michigan was win VanWormer scored his first series victory in 2002 at Hartford Speedway Park. ... The race's lone caution on lap 16 was caused when contact back in the pack sent Tim Lance Jr. for a spin in turn four with heavy front-end damage.

Polesitter Ryan Gustin led every lap of the first heat race, topping Rusty Schlenk in the 10-lapper. Tim Lance survived contact with Curtis Roberts early in the race to finish third, while Roberts finished in the fourth and final transfer spot after ralling from the tail following his lap-three spin. ... Frank Heckenast Jr. ran unchallenged to win heat two, while Brandon Thirlby recovered from early troubles to finish second. Thirlby had faded to fifth before using a lap-seven restart to drive to second in on lap. But he made contact with Chad Finley while taking the second spot, and the resulting scrample left Preston DeShanon spun in turn four. Thirlby continued on to finish second, while Jason Feger and Bob Gardner shuffled Finley back to fifth. ... Travis Stemler ran away with heat three, while fifth-starting Logan Nickerson charged to second. Brian Shirley and Ryan Lanphierd made heavy contact while battling for third late in the race, but both drivers continued on to finish third and fourth respectively. ... Colton Burdette held off Dona Marcoullier to win the fourth and final heat race with Eric Spangler and Garrett Wiles also grabbing transfer spots at the finish.

The DIRTcar Summer Nationals heads to Tri-City Motor Speedway for the third leg of the tour's four-race Michigan swing that wraps up the tour's 2020 campaign. Friday's $10,000-to-win event marks the tour's first ever visit to the Mike Blackmer-owned track.

Blackmer also operates Merritt Speedway in Lake City, Mich., where the series is scheduled to head for its finale on Saturday after Oakshade Raceway in Wauseon, Ohio, the traditional site of the season-ender, decided it was unable to host the race because of coronavirus restrictions.